You are currently browsing the monthly archive for February 2011. 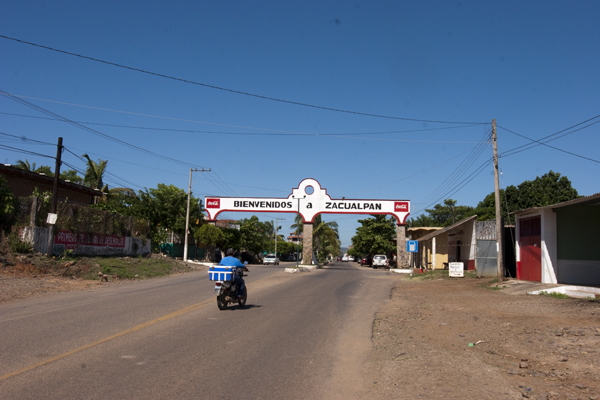 Welcome to Zacualpan, the town of a million speedbumps. Photo by David Lansing.

This morning, after a bit of a late start, we headed back towards Puerto Vallarta via convoy with me leading in the injured Blue Whale and the Fletcher clan following in a rented SUV. The idea was that if the brakes failed on the Blue Whale and I went careening off the side of the highway into a banana tree, Chris would install one of those simple wooden cross markers you see along the highway everywhere in Mexico and maybe even alert the Federales, assuming they weren’t late getting to the airport.

We inched our way through Zacualpan, which has so many topos or speedbumps, most of which you don’t discover until you’ve flown over them, that on the arch welcoming people into town they should add a legend that says something like, “Zacualpan, la pequeña ciudad de un millón de topos”—the little town of a million speedbumps.

By the time we got to Las Varas, the last town before turning on to the highway, the brakes on the Blue Whale were completely gone. Well, what are you going to do? Unfortunately, my autoclub insurance doesn’t extend down to Puerto Vallarta. I could have pulled over and waited for the Fletchers but I knew their SUV was already loaded to the gills and I wasn’t at all certain that Chris’ mom, Sally, would really enjoy having me sit on her lap for the next hour or so, particularly since her hip was bothering her. So the logical thing seemed to be to just carry on and hope that as I guided the Blue Whale through the torturous windy jungle road where every Mexican driver’s favorite pastime seems to be playing “chicken” with the endless string of cars and Coca-Cola trucks careening around blind curves that I would simply never have to use my brakes.

When we finally came out of the jungle near the Punta Mita turnoff where the road opens up to two-lanes in either direction, I took my foot off the gas and just let the Blue Whale slowly coast to a stop along the side of the road. A few minutes later, the Fletchers pulled up behind me.

“Hey, you made it no problem!” Chris said.

Actually, I told him, I did the whole drive without any brakes. And now I thought it best to just continue on into Bucerias and go to Gecko, where they’d rented their SUV and where their mechanic had worked on the Blue Whale before.

“How are you going to get there?” Chris asked.

I’ll drive, I told him. Slowly. Right behind you. So that if I get in trouble, I can at least crash into your rented SUV. So off we limped. To beach the Blue Whale in Bucerias.

I’ve been trying to describe what it was like to release 2,000 hatchling turtles along Playa las Tortugas, about an hour south of San Blas, but it’s difficult to do. You just don’t really get how difficult it is for these little guys to actually make it into the sea and how astronomical the odds are against them unless you see it for yourself. So I’ve put together a short video showing the release backed up by one of my favorite mariachi bands, Mariachi Vargas.

Towards the end of the video you’ll see a dozen or two turtles really scrambling forward, trying with all their might to make it to the water before the sun set and then BAM! a wave comes in and washes them all back up the beach. That was the hardest thing to watch. To see them spend so much time and energy trying to get to the water and then all their effort is literally washed away by the incoming surf. Some of the turtles would try it again. But some just seemed to give up. As if to say, Okay, I’ve had it. I’m just going to sit on the beach and watch the sunset. Which is what we all did as well. 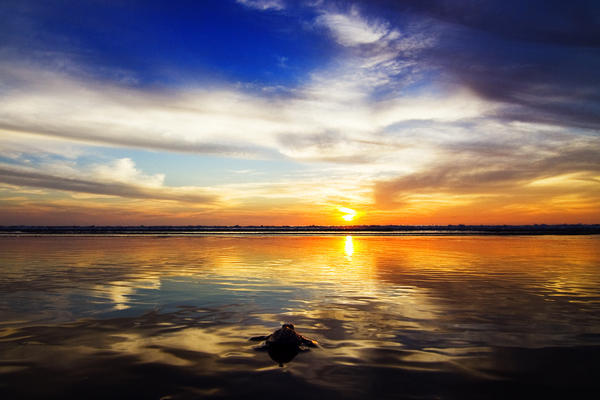 The last of the 2,000 turtles released watches the sun set--maybe for the last time. Photo by David Lansing.

I’ll tell you what, you want to see an example of “survival of the fittest” in action, release 2,000 hatchling turtles and watch what happens. Right off a dozen or so little guys march straight for the sea leaving their brethren behind. They look strong and full of purpose and seem to know exactly where they’re headed. Meanwhile, most of the other turtles just sort of stand around looking greatly confused, bobbing their heads up and down like the porcelain chihuahua dog on the dashboard of my grandfather’s old Buick.

And then there is the group that just isn’t going anywhere. They sort of sit back on their little gray-black shells and look up at the sky almost begging a seagull to come and pick them off and put them out of their misery.

I just watched the whole thing and thought, Well, this is the way Mother Nature rolls. She can be a tough bitch. But most of the women, including Mechas and Chris’ wife Malin, were not about to let these turtles die without a fight. Even though the turtle sanctuary employees had told us to not pick up the turtles after we placed them on the sand, Mechas and Malin couldn’t resist. A wave would come in, rolling several of the baby turtles around and around in the surf and sand until they ended up stunned, several feet further back from where they had begun, and then just sit there, exhausted, with no desire to give it another go. Which is when Mechas and Malin would surreptitiously bend down, as if they just wanted to get a closer look, and, when the sanctuary volunteers weren’t looking, pick up the bedraggled turtle and carry it in their palm several yards closer to the water before releasing it. Of course, this almost invariably meant that the turtle would get nailed by the next incoming wave and go sprawling head-over-tiny-tail back up the beach, even more exhausted. But this did not deter the women. They were determined to save these plucky little guys so they’d repeat the process again and again. Until the hatchlings simply refused to move anymore. Or maybe were dead.

Happily, most of the hatchlings made it to the ocean where, no doubt, most of them were gobbled up by predators within a matter of minutes. But, as the sun was setting, I noticed that there was still a single turtle, spread out on the sand, facing the sun. He didn’t look in distress. In fact, he looked rather peaceful. Who knows, maybe he’d already expired. But I like to think that he was just taking in the last moments of the setting sun, knowing full well that this was his last day on earth, feeling neither remorse nor regret, and thinking, “Go on, boys. Keep swimming. I’ll catch up with you later.”

And then the sun extinguished itself in the sea and it was time to go home.