You are currently browsing the monthly archive for June 2012.

Bodrum and the story of the Blue Voyage 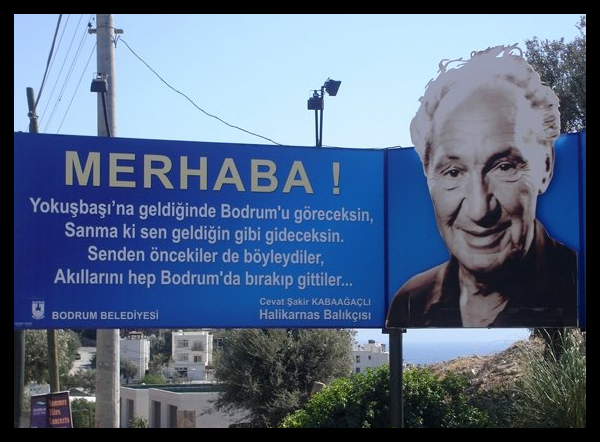 The sign at the top of the hill in Bodrum, Turkey, dedicated to Cevat Sakir.

Besides Herodotus, the other famous figure in Bodrum is Cevat Sakir, the scion of a prominent Ottoman family. Interesting figure, Sakir. Born on Crete in 1890, Sakir studied history at Oxford before getting into a bit of trouble when he shot his father after he discovered the old man had been sleeping with his girlfriend. Well, these things happened back then (and even now, I suppose). Since the Turkish officials probably figured the old man had it coming, Sakir was sentenced to three years of house arrest.

But, as it turned out, that wasn’t the worst crime he committed in his youth. At least, not in the eyes of the Turkish government. After WWI, when Atatürk came to power and decided to cleanse Turkey by banishing Greeks, Armenians, and Kurds (among others), Sakir wrote an article for an Istanbul magazine with this wordy but provocative title: “How the prisoners who are sentenced to death are going in full possession of their consciences to the gallows.” He could have used a good copy editor, obviously, but the point he was making was that these condemned prisoners were nothing but scapegoats in Atatürk’s new Turkish republic.

Well, Atatürk wasn’t real keen on the story. So he had Sakir arrested and sentenced to three years of house arrest in Bodrum. Which, at the time, was considered sort of the Siberia of Turkey. It was, according to the memoir Sakir later wrote, a simple and poor place whose residents eked out a meager existence from the sea by fishing and sponge-diving. “The journey was long and arduous, with the shadows of bandits lurking in the hills; the last stretch of the route from Milas was passable only on foot and muleback.” 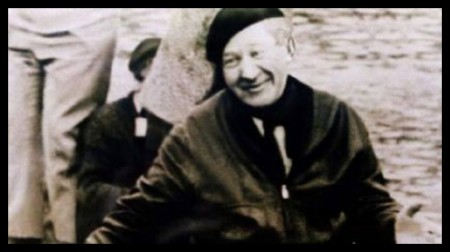 Cevat Sakir, who called himself "The Fisherman of Halicarnassus."

But guess what? Sakir kind of dug the place. He made friends with the fishermen and sponge divers and they started taking him out on the sea with him. He was having such a good time in Bodrum that when the military heard about it, they brought him back to Istanbul to finish his sentence. No matter. When he was finally released, he returned to Bodrum and became the grand old man of the town, planting trees (the palms lining the quay are his) and telling tales of his voyages along Turkey’s western coast with the fishermen in a book called Blue Voyage.

The book became so popular that many of the fishermen and sponge divers converted their fishing boats, called gulets, into charter boats so middle-class tourists could experience Sakir’s blue voyages. In fact, it’s not an exaggeration to say that Sakir not only fathered the tourist industry in Bodrum, he pretty much fathered the entire tourist industry in Turkey, outside of Istanbul.

Not bad for a boy who started out his adult life by killing his father.

When we arrived in Bodrum, I noticed a sign at the top of the hill with Sakir’s photo and a quote, in Turkish, from him. I asked Sidar to translate and he said basically it said this: “If you come to the top of this hill you will see Bodrum. Don’t think that you will leave the same person as when you arrived. To all those who came before you, it happened the same: They lost their heart in Bodrum.”

The best pizza in Rome, definitely 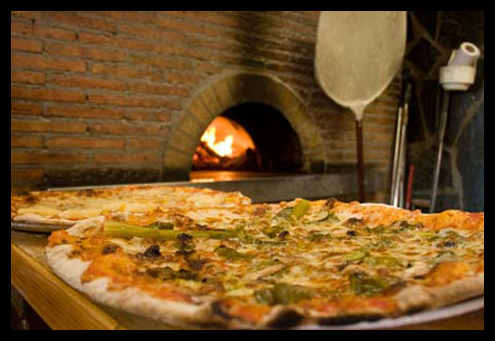 Antonio is intrigued, but still very confused, so he takes me back to the pizza oven and finds someone who speaks slightly more English than he does. It is enough to get the point across. I find a photo on the wall of Marc, Louis’ father, from when all the family but Louis came to visit the Italian cousins, and point. Antonio asks me, in Italian, which one of the brothers pictured is my boyfriend. I shake my head. He says, oh, he was the one in Iraq. I nod. “Si, si,” I say. Is he still in Iraq, or did he come back? Asks Antonio. I beckon cheerfully to indicate that in fact, he has come back.

At this point, two other older men, the other two brothers who own the pizzaria, come out and kiss me on both cheeks. They welcome me in Italian, and I sit down, and order in (bad) Italian. That much I can do. My pizza comes, along with my sparkling water, and a few locals come in and sit down. I can hear Antonio explaining to one well-dressed couple who I am. The man speaks English, and he tells me, grandly, that this is the best place for Roman pizza in all of Rome. It’s the best pizza I’ve had in Rome, anyway. It is nothing like American pizza, and the crust is so thin in spots that it crumbles like a cracker. The olives, salty and plump, still have the pits in them.

I finish the entire pizza, and I ask the waiter for the bill. He goes off, and Antonio comes back. “No, no,” he says, waving his hand at me. He turns and asks the couple to translate for him.

“No, no,” the woman repeats, waving her hand.

“It’s only one pizza,” the man finishes for Antonio.

The other two brothers come out again and kiss me goodbye, along with Antonio. They say to give their regards to Luigi and Marco. I nod. The well-dressed man repeats this for me in English case I haven’t understood.

And then I head back towards the metro, with a full stomach, smiling. 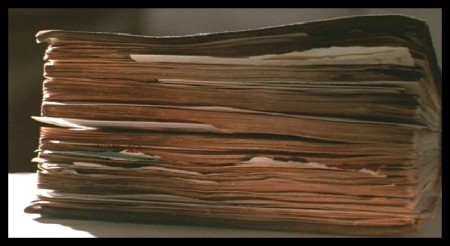 The English Patient's copy of Herodotus, who was born in Bodrum. Mine's about the same size but in slightly better shape.

When I knew that during my visit to Turkey I’d be traveling to Bodrum, I bought The History by Herodotus. Herodotus, who is largely considered to be the father of written history, was born in Bodrum in 484 BC.

Like most people I’d never heard of Herodotus until I saw The English Patient. Do you remember The English Patient? Count Almásy (Ralph Fiennes) and Katharine Clifton (Kristin Scott Thomas) are trapped in the cab of a truck that has turned over in the Sahara during a sandstorm and, in trying to calm her, he tells her about all the different names there are for winds: “There is a whirlwind from southern Morocco, the aajej, against which the fellahin defend themselves with knives. And there is the ghibli, from Tunis, which rolls and rolls and rolls and produces a…a rather nervous condition. And then there is the harmattan, a red wind, which mariners call the sea of darkness. And red sand from this wind has flown as far as the south coast of England, apparently producing showers so dense that they were mistaken for blood. It’s all true. Herodotus, your friend, he writes about it. And he writes about a wind, the simoon, which a nation thought was so evil they declared war on it and marched out against it. In full battle dress. Their swords raised.”

But perhaps the best Herodotus story is told by Katharine herself. It’s around the camp fire in the desert when she tells the story of Candaules and Gyges, foreshadowing the affair yet to come which will eventually lead to not only the death of her husband, but her death as well. It’s a little bit of a story within a story. Here’s a link to a 2 minute YouTube clip from the movie if you don’t remember the scene.

In search of the best pizza in Rome 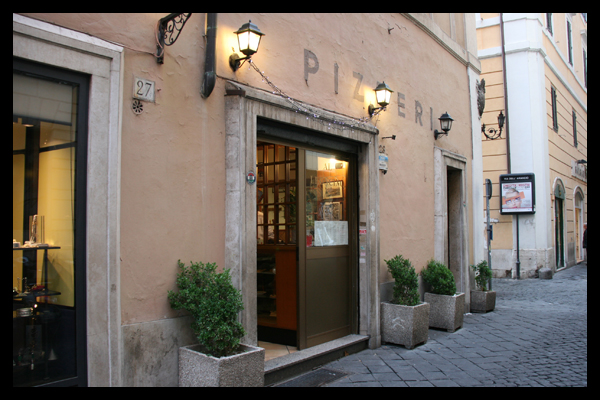 My boyfriend has family in Rome, and he asks me to go visit them for him. They’re his second cousins or something along those lines, and there are three brothers who own a pizzeria not far from the Spanish steps, he tells me. Also, as a bonus, it’s supposed to be the best pizza in Rome, although my source may be biased. “Go early,” he tells me “it can get crowded.”

I take the metro to Spagna and head down Via Condotti. Valentino, Prada, Cartier, Louis Vuitton, Hermes and Chanel line the street, displaying impossibly high heels and beaded dresses and delicious leather handbags. Behind me, the sun is setting. At the end of the street, there’s a huge sign for Fendi, and a triangular mess of small streets, and I duck into the Via Leoncino and find myself face to face with the pizzeria.

There’s a man at the door who I find out later is called Antonio, and I remember that I should have been practicing my Italian on the way over to try to explain the point of my visit. I get as far as “yo sono…” and then ask if he speaks English. Not very well, he says, and thinks I want something to eat when I try to tell him who I am. I shake my head.

“La familia DiConti,” I say, “In America. You know? I am the girlfriend of Luigi DiConti.”

From Istanbul to Bodrum 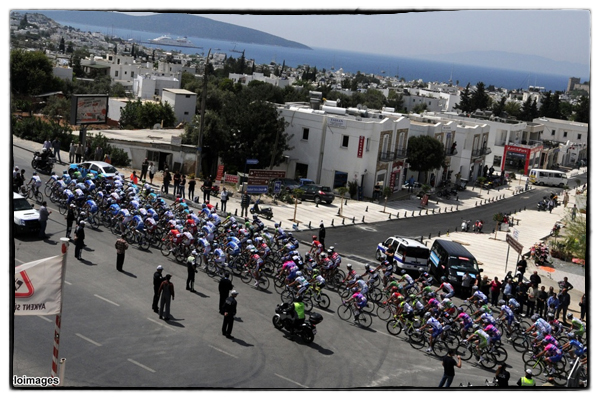 The Tour of Turkey going through Bodrum.

We flew to Bodrum Saturday morning. It’s nothing to get there, just a 40-minute flight, but, of course, you spend hours and hours at the airport. And the security at the Istanbul airport is more rigorous than anyplace I’ve ever been as we had to go through two full-on security checks before boarding and then once on the plane, they came through and made us all individually identify our carry-on bags. This either makes you feel very secure or, if you’re like me, wonder what sort of risks are they confronting that they have to be so meticulous. 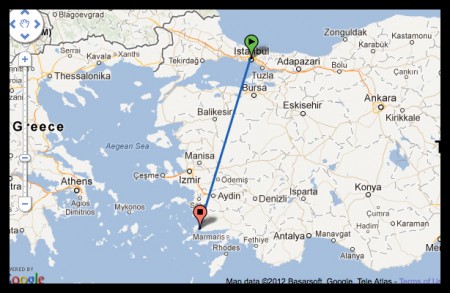 The funny thing is, the drive in from the Bodrum airport took us much longer than the flight itself. And it could have been worse. There was a big bike race going on, the Tour of Turkey, and much of the 22 miles of highway between the airport and Bodrum was closed. Which is why it’s always so great to be traveling with Sidar. At the first road block, he had the van driver pull up to a police car and Sidar hopped out. I saw him showing my business card to the policeman and pointing at me. A few minutes later, we were told to follow behind an official chase vehicle. I asked Sidar what he had said to the policemen. He said he’d told them I was a famous American journalist here to cover the race and so they let us through.

Twice more we got stopped. Each time Sidar told them some fanciful story and we were waved through. While the drivers of other cars halted at busy intersections and along the side of the road wondered why we were getting through and they weren’t. Not exactly ethical but what could I do? I was just the passenger.