You are currently browsing the monthly archive for July 2013.

No lobster for Luscious 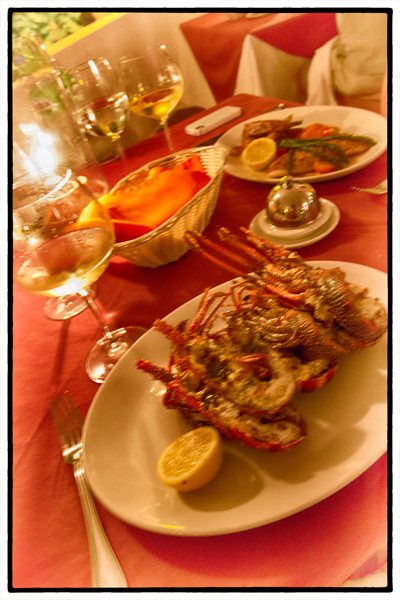 A platter fo crayfish at Jacala in Anguilla. Photo by David Lansing.

So we’re dining at Jacala on the beach in Anguilla and Jacques brings out the whole snapper meunière which he’d pretty much insisted Luscious order. It looked nice, even though I’ve never been a big fan of eating animals who stare back at you. There was the little fishy, cloaked in a few bright spears of asparagus, and topped with a lemon hat as if it were wearing a yellow derby. Very pretty. Oh, and, of course, the meunière (which is really nothing more than browned butter with parsley and lemon).

Jacques stood next to Luscious, his arms lowered, his hands crossed, waiting for her to say something.

Jacques, satisfied, nodded and quickly left the table. A minute later he was back with my Anguilla crayfish.

Now if you’ve ever had crayfish in New Orleans, you probably think of crayfish as being these little critters not much bigger than a finger that, after much work, give you maybe a single bite of food. But that’s not Anguilla crayfish which are actually a smaller, sweeter lobster (the spotted spiny lobster or Panulirus guttatus) than the traditional Caribbean spiny lobster.

I figured I’d get a couple of the gorgeous crayfish Jacques had showed me earlier. But no…I got six! A platter full of crayfish! A bounty of crayfish! A pot of crayfish! Which is why Luscious had gasped when Jacques brought them to the table.

So Luscious had her little boney bug-eyed snapper with a French sauce she didn’t want and I had a turkey platter spilling over with just-caught Anguilla crayfish.

Now some people in this situation might be tempted to share. To say to Luscious, “Hey, that boney goldfish you have looks really yummy. How about if we split our meals and I’ll give you some of my sweet, delectable, just-caught lobsters, since I have so many of them, for a bite or two of that gimlet-eyed fish you haven’t touched?”

But here’s another one of my rules when eating out: I don’t share plates. Ever. With anyone. If you just happened to order the crappiest thing on the menu because you don’t like to get the same thing someone else is getting, well too bad. No lobster for you. Sorry. I ordered the lobster, I’m going to eat the lobster. So keep your goddamn fork away from my plate. Oh, and bon appetit!

Luscious and Jacques at Jacala 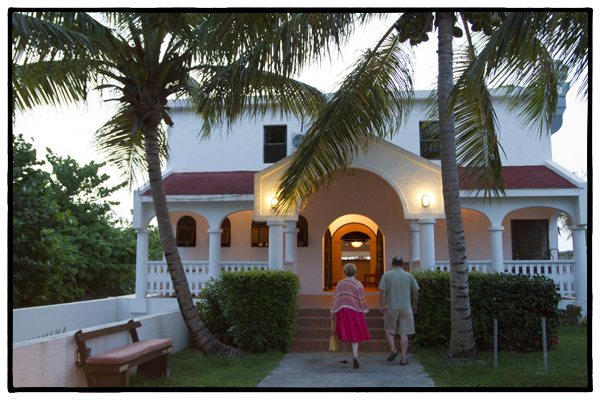 The entrance to Jacala on Anguilla. Photo by David Lansing.

Luscious and I have arrived early to Cap Juluca. Our other bandmates—Bail-Out, T-Bone, Mrs. Pookie, and The Man—will wander in sometime in the next couple of days. Then we’ll settle down to the hard work of figuring out just what sort of band we are and, more importantly, what our album cover is going to look like.

But for now it’s just me and Luscious. Who suggests that, since we don’t really have any plans, maybe we should go eat.

We’ve commissioned Mr. Glennis Connor, Anguilla’s Patron Saint of Lost Luggage, to be the band’s driver on this trip and he picks us up at seven from the resort to take us to the other side of the island. Three, maybe four minutes later, we’re there.

“We could have walked,” I say as we get out of the car. 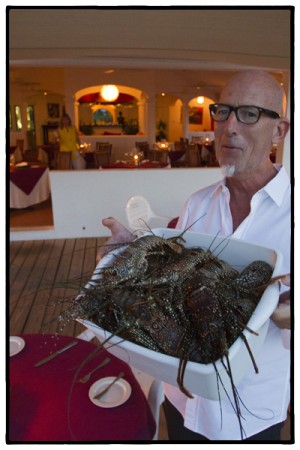 Jacques and his bucket of crayfish. Photo by David Lansing.

Jacala is owned by two ex-pats from France, Jacques Borderon and Alain Laurent (from whence comes the Jac-Ala). Alain is the chef. Jacques runs the front of the house. And that’s exactly what it looks like: someone’s house. A house on the beach. In Anguilla.

Jacques is one of those guys of indeterminate age (could be 50, could be 70) who looks very hip. He’s sporting a little bippy on his chin, a Mr. Clean dome, and thick black glasses that frame his dark eyes in such a way as to make him look very, very serious. In short, he has an air of authority about him that suggests “Don’t mess with me.”

The first thing Jacques does is bring a tub of just-caught crayfish to our table. Which makes it very easy to decide what I’m having for dinner. Luscious was thinking the same thing but she’s one of those gals who doesn’t like to get what someone else is getting. Don’t ask me why. Instead, she’s looking at the breaded breast of chicken or maybe the filet mignon. I tell her she can’t order either.

“Because we’re on Anguilla. You don’t come to Anguilla to have steak or chicken.”

It’s not that I think I should tell people what to eat. It’s just that I hate to see anyone go to a restaurant and order chicken. Or salmon. I really hate it when they order salmon. Don’t people have any idea what sort of a markup restaurants make on chicken and salmon?

Besides, as the founder of our unnamed band, I feel a responsibility to set the tone. So no chicken. No steak.

Luscious asks Jacques about the mahi-mahi and the whole snapper. Jacques tells her to get the snapper.

“I don’t like heavy sauces on fish,” says Luscious. “I’ll have it grilled.”

Jacques says nothing but does not write her order down. He simply stands beside the table glowering at her through his thick-framed glasses.

After what seems like 20 minutes, Luscious says, “You really think I should have it meunière?”

“This is the only way,” says Jacques.

“But the menu says it can also be grilled.”

“It can be. But it shouldn’t be. You can, of course, order it any way you wish. But the best is meunière.”

Luscious gives me a startled look. I say nothing. I don’t want to get into it with Jacques. I’m guessing in his free-time he’s a kick boxer or something.

Maybe I should have let her order the steak.

Arriving in Anguilla with no luggage 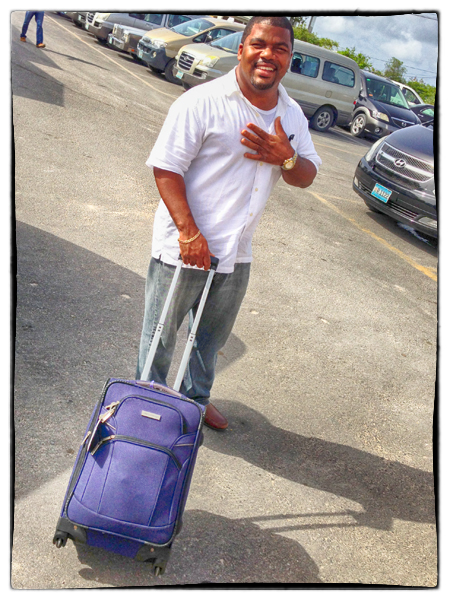 Luggage is like a child; the minute you take your eyes off it, it disappears. Which is why I almost always do carry-on. I want to know where my little guy is.

So yesterday it was Los Angeles to Miami. Three hour layover. Miami to St. Maarten. Ten minute taxi ride to a nearby lagoon dock where we wait for a small boat to take us to Blowing Point Ferry Port in Anguilla. And through the whole journey I’m like, “Somebody please hold hands with my luggage so it doesn’t get lost while I use the restroom. DO NOT LET IT OUT OF YOUR SIGHT!”

I watch my little blue bag get transferred from the taxi at St. Maarten to the guy who puts a “CAP JULUCA” tag on it and wheels it down the dock to our boat. And then when we get to Anguilla, of course, my luggage is no where to be found.

I’m frantic. The people who operate the ferry service are frantic. There are more walkie-talkies blaring at each other than at a Secret Service confab. And then up strolls Mr. Glennis Connor, operations manager for Bennies Travel & Tours in Anguilla.

“I’ll get it,” says Glennis. And while half a dozen ferry reps run around the dock looking under tarps and interviewing bag handlers, Glennis disappears behind the office. Not two minutes later, he returns dragging my rather-sheepish looking carry-on behind him.

“It was on the other ferry boat which makes more stops than this one. But they all end up here. I figured it would be on that boat.”

And it was. Mr. Glennis Connor: Anguilla’s Patron Saint of Lost Luggage.

I really thought my little photo of Greenland as seen from my British Airways flight was pretty spectacular–until I got the following note and stunning photos from one of my readers, Fred Harwood:

“Yes, Greenland at sunset impresses. We opened our shade and when I grabbed the camera the couple behind us wondered what was up and looked out as well. They also found it impressive.” 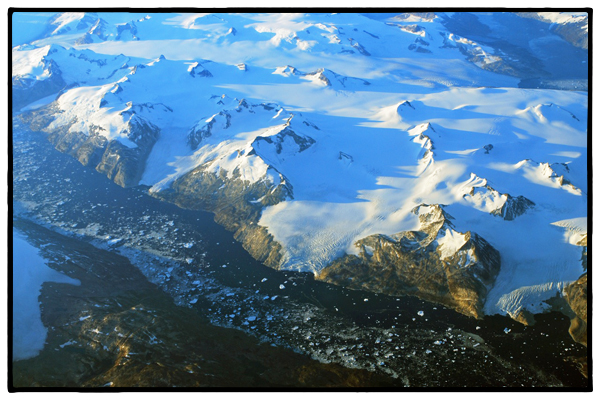 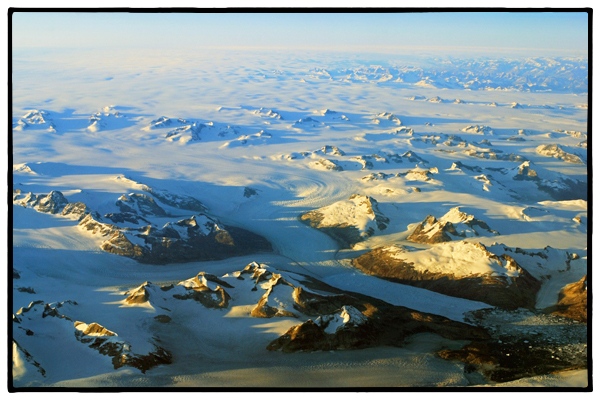 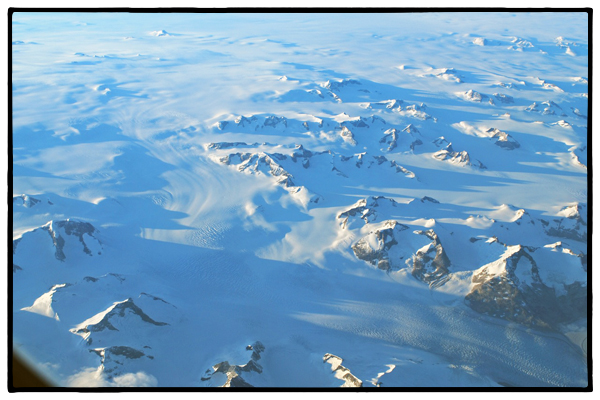 Greenland and then home 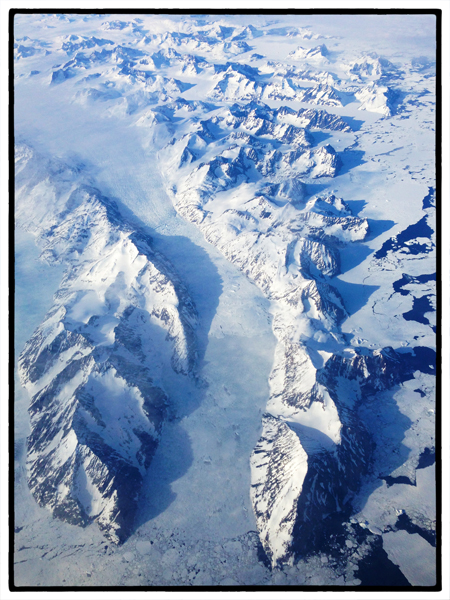 From Dublin to Heathrow (which was a mess, as usual), where instead of wondering if we’d make our flight we ended up with a four hour delay because the crew had trouble getting to the airport. Once we finally took off, I fell asleep almost immediately. Woke to a dark, silent cabin. Got up to stretch a bit and went back to the galley. And looked out the little portal.