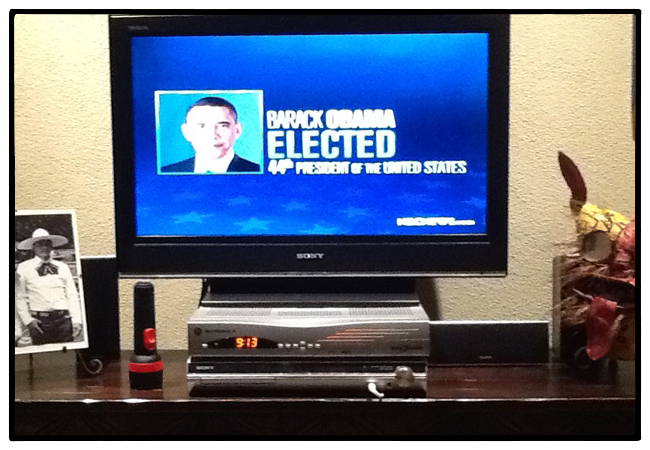 There I was, sitting in my little house in Bucerias, watching the U.S. elections live on a satellite signal that comes from Canada. How very international. And when NBC interrupted one of their talking heads to declare, at exactly 9:13pm Bucerias time, that Obama had won reelection, I just had to grab my iPad and take a photo of the screen. A minute later, fireworks exploded over the Bay of Banderas. Do I think the fireworks were related to Barack’s win? I do not. They were probably to celebrate a wedding or a convention of medical device salesmen in Puerto Vallarta, but I don’t care. It felt celebratory.

I know some of my readers are in mourning today. I’m sorry. I know how you feel. When Bush won a second term in ’04 I seriously considered moving to Canada. I hope those of you who supported Romney won’t be as dramatic or as rash. I hope, instead, you’ll do what Americans used to do after an election: Support your country and your president. The worst thing you could do–for yourself, for your party, for your country–is to just go all medieval on the country and decide you’re going to be against anything Obama is for, no matter what it is. That doesn’t help. And eventually what will happen is what happened in California; the voters will get tired of the roadblocks and elect a super-majority that just ignores the minority party. I don’t want that to happen. I want both parties to sit down and talk and compromise and work things about. But that can only happen if you agree to disagree and look for middle-ground. Let’s move foreward–not backwards.