A cup of tea at Istanbul’s Grand Bazaar 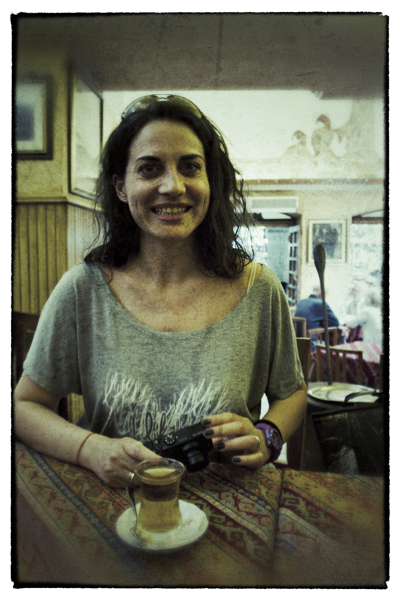 Gimina Maxim, a Romanian film director, helps herself to my cup of tea at the Grand Bazaar in Istanbul. Photo by David Lansing.

I should have taken a look at my Lonely Planet guide before letting Sidar drag me and the Romanians to the Grand Bazaar this weekend. If I had, I might have heeded Rule One: “Make sure you’re in a good mood and ready to swap friendly banter with the hundreds of shopkeepers who will attempt to lure you into their establishments. There’s no use getting tetchy with the touts here….”

Well, I wasn’t in a good mood. And I got “tetchy” with the touts. Fortunately, Sidar noticed and quickly suggested we sit down and have some tea. He took me to Sark Kahvesi (Orient Coffee House), a fine little hole-in-the-wall with lots of old black-and-white photos of Turkish pashas on the walls and murals of flying dervishes.

Pashas and dervishes and tea—what could be better?

I’ve become quite addicted to Turkish tea (or cay as it’s generally called). Not because it’s good. It’s not. It’s black and tannic (like a cup of Lipton that has been brewed for way too long) and needs to be cut with a cube of sugar (or two or even three) to make it palatable, but it’s an important part of social etiquette here, and I rather like that. They drink tea all day long here in Istanbul. In fact, many businesses in Istanbul employ a cayci, often a boy, who spends the day delivering tea around the neighborhood. There are dozens of them in the Grand Bazaar. You see them rushing about through the crowds, carrying three or four tulip-shaped glasses of tea on trays or in a wire basket, never spilling a drop. It’s quite something.

Anyway, Sidar and I sat down at a table next to the antique semaver used to make tea, and shortly after we’d ordered, the Romanians, Delia and Gimina showed up.

“How did you know we were here?” I asked Gimina.

She shrugged. “Where else would you be?” And with that, she helped herself to my cup of cay.