A description of Berlin in 25 words or less 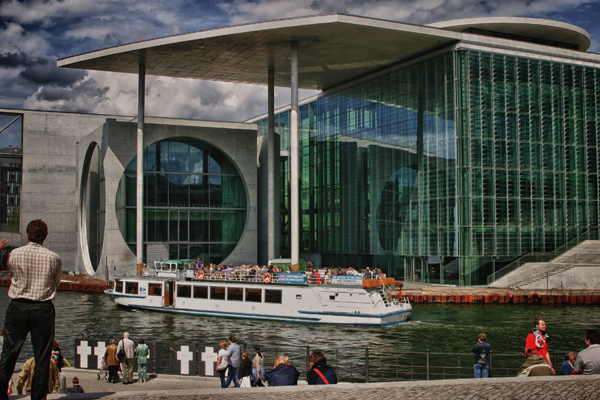 A boat tour along the River Spree in Berlin. Photo by David Lansing.

Yesterday afternoon I took a taxi from the Hotel Adlon to the western edge of Berlin to go on a boat tour along the River Spree. The concierge at the Adlon said the tour would be in English but the guide, wearing a pea green lab coat, spoke nothing but German. It didn’t matter. My boat mates were a multi-generational Italian family and some laid back French college students. I figured none of us spoke much German, so what the hell.

And, anyway, you pick up enough words in the guide’s spiel to get an overall impression of what you’re seeing and what he’s talking about. Some of the words I picked out: porcelain, manufacturer, lager, computique, park, hotel, Tiergarten, accordion, clock tower, Sony, Reichstag, glass, crane, Kaiser-Friedrich-Gedächtniskirche, parliament, TV studio, plaza, border, East, abandoned.

There it is: My tour on the River Spree in less than 25 words.

The captain of our little barge interrupted the guide’s spiel at one point to let us know that we were about to pass underneath a bridge so low as to behead anyone tall enough and stupid enough to stand up.

I knew this not because I understood the captain’s German, which I did not, but because a crew member on the boat interpreted it for me as I was walking up the stairs to the beer cart on the top level, oblivious to the fact that I was about to get conked.

I thanked him and bought him a beer. Which he quickly drank while keeping an eye out for the captain.