A drive to the Normandy coast 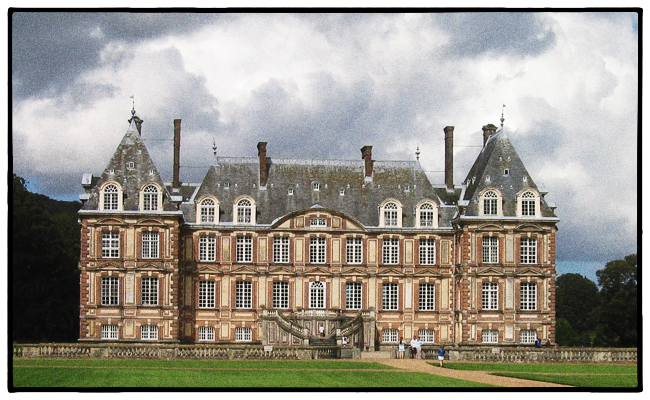 A chateau along the road to the Normandy coast.

A Letter from Katie Botkin in France:

It’s my birthday in Normandy. I wake up in the Mazo’s attic bedroom, in a bed older than myself. It’s fitting that I’m spending this holiday with the Mazos, a French family with whom I spent Christmas 2004 and Easter 2005, in the French Alps and the Loire Valley, respectively.

Christine is working, but Pierre, a short, exuberant Frenchman of about 60, says we will go on a historical tour of the Seine, all the way to the coast. He wants to go by motorbike, but I’m less keen about this, especially since it’s raining. So we go by car. He starts off the tour with loud, almost explosive, explanations in English. He seems to be making up for his hesitation over word choice in volume. I respond in French, and he gets the hint and switches, which is far more efficient. He begins again, explaining the Viking invasions up the Seine, the subsequent Norman invasion of England, the Norman kings, and the Hundred Year’s War.

Most of this I am well-acquainted with, but Pierre wants to quiz me. He jumps about three centuries ahead and asks me if I know why the Hundred Year’s War started.

“Oui,” I say, thinking of the opening dialogue in Henry V.

“Pourquoi?” he asks. I think: “The right and title of the female,” but I’m not sure what the quote is in French, so I say: “Ils étaient cousins.”

It’s not enough: he explains the causation in grand detail, how Isabella of France, who produced Edward III with her husband Edward II of England, got denied her right to pass down the crown of France because she was a woman. The crown of France got passed on to Edward III’s cousins instead. Because the Dukes of Normandy ruled England anyway, all the more reason they should sail back to France and assert themselves. Pierre insists that Joan of Arc should have left well enough alone, since it was essentially a civil war. But she did not, so she was killed in Rouen, the capital of Normandy.