A lemberger by any other name…

Ever heard of lemberger? Me neither. Until yesterday when Co Dinn poured me a glass at the Hogue Cellars tasting room.

Wait…poured me a glass? You thought I said limburger, didn’t you. As in stinky cheese.

Nope. I’m talking about lemberger. As in wine. But that’s the problem, right? Who’s going to go to a nice romantic restaurant and order a bottle of lemberger? Nobody. Which is why almost no one has heard of it. Despite the fact that, as far as I’m concerned, it’s rocks over merlot and even pinot noir. 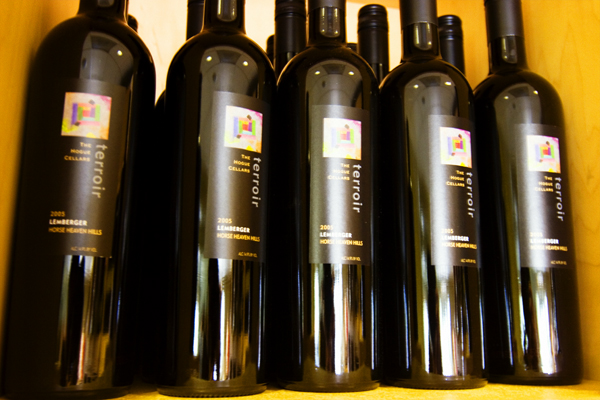 A little history: Lemberger has been around forever. Some say it was growing in Austria, where it’s known as blaufränkisch—no improvement there—a thousand years ago. It’s still a fairly popular varietal in vineyards along the Danube River from Germany to Slovakia.

In 1941 a Hugarian musician escaping the war brought his French horn and some cuttings of lemberger to British Columbia. From here lemberger managed to hitchhike down to Washington where Walter Clore, known as the father of the Washington State wine industry, did a nice enough job growing it that it caught the interest of Julio Gallo who, in the ‘70s, thought about buying Washington lemberger grapes until he realized he just couldn’t get enough of them to make it worthwhile. Probably just as well. If Julio Gallo had bottled lemberger wine under his label back in the 70s it would have ended up being called Boone’s Farm Fuzzy Navel or something.

Since then, lemberger has just been this strange little grape from the Yakima Valley that growers like Hogue Cellars have played around with but have never seriously attempted to market. In fact, even if you go on the Hogue Cellars web site, you can’t buy lemberger. The only way to taste it is to go to the Hogue visitor’s center in Prosser, like I did, or join their wine club. Not because it’s not a great wine—it is—but because when people think of lemberger they think “stinky” not “yummy.”

And it is yummy. An incredibly beautiful ruby red wine with mouthfuls of ripe cherries, dark blackberries, plums, currants and even, I think, a hint of chocolate.

“I love this wine,” I told Co as he poured me a second glass.

They might, I told him, if you guys changed the stupid name.

“Well, we thought about calling it blaufränkisch,” he said.

Yeah, no, that isn’t going to work.

So having already renamed Washington’s Snipes Mountain AVA to Dinosaur Hills, I guess I’m going to have to come up with a new name for lemberger.