There was this article last month in the New York Times about a restaurant here in Santiago called Hosteria Doña Tina that said if you want to sample “the hearty, rustic specialties that are considered true Chilean cooking, this sprawling place on the outskirts of the city is surely the best choice.”

Well, here I am in Santiago searching for “true Chilean cooking” (as well as a good terremoto, which I still haven’t found) so of course I had to make my way out to Doña Tina for dinner. I mean, if Florence Fabricant of the NY Times says this is the place to sample Chilean cuisine, it must be good, right? 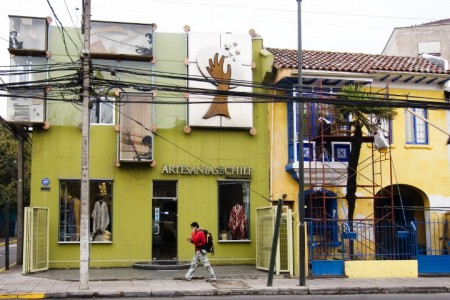 But before we head out to Doña Tina, I have to tell you how much I love the Ritz-Carlton (and, no, I don’t get anything for plugging them). They just always do things right. I just moved over there yesterday from the San Cristobal Tower and while that hotel was nice, the Ritz-Carlton is on a completely different level. I mean minutes after I’d checked in, Branko Karlezi, their director of public relations, calls me in my room to make sure everything is okay and see if I need anything.

“I just have a quick question for you,” I say. “Do I need to make a reservation for Doña Tina? And how long of a cab ride is it?”

Branko says, “What time would you like to dine?”

“About nine?” I venture.

I told him there was no need for that, that I’d be happy to grab a taxi. I was just wondering how long it would take me to get out there.

Well, that’s the problem, said Branko. “The restaurant is really out in the countryside and it can be difficult to find a taxi to take you that far out and even more difficult to find one to bring you back. So, please. We would be happy to provide you with a car and driver.”

So anyway, my driver, Juan Carlos, picks me up at 8:30 and we drive and drive and drive until I’m sure I’m being kidnapped and taken to Peru. We go up windy hills and through heavy woods with nary a sign of any civilization until suddenly here we are: at Hosteria Doña Tina. As Ms. Florence Fabricant of the NY Times says, it’s a sprawling place. There are cavernous rooms to the left and a big open room with a fireplace in the middle to my right and more rooms beyond that.

However, there are no diners. Zero. Zilch. Just three guys sitting on stools behind the bar watching a soccer game. When I walk in they barely take their eyes off the TV. Finally, one guy comes over and asks what he can do for me. I tell him I’m Mr. Lansing and I have a reservation for nine.

He shrugs at this news and swings an arm over the dining room, telling me to sit wherever I want. So I take a seat near the fireplace just so, you know, it won’t feel so lonely.

A few minutes later the guy comes back with a menu and asks me if I’d like something to drink.

He shakes a finger at me. “No terremoto,” he says. “Pisco sour.” And without waiting for my response, he heads back to the bar and the soccer game.

The pisco sour he brings back is, quite simply, horrendous. Like a margarita made with really bad sweet and sour mix and cheap tequila. I take one sip, push it away, and ask him to bring me a glass of red wine instead.

“No,” he says. “No glass of wine.” They only sell bottles. So I order a bottle of carmenère, the signature Chilean wine that, until the late 1990s, was thought by the Chileans to be merlot. The guy opens the bottle of wine while looking over his shoulder at the TV in the bar and hurriedly fills my glass so high that it is impossible for me to pick it up without spilling all over the white tablecloth, so I lean over and take a sip from the glass while it’s still on the table.

It is—how do you say?—corked.

“Huele como perro mojado,” I tell him. It smells like wet dog.

My Spanish, I admit, is horrible and my Chilean Spanish even worse so perhaps I did not say exactly what I meant to say. Always a dangerous thing when speaking in a foreign language about dogs and bad things. Which probably explains why the waiter turned his back on me and immediately disappeared into the kitchen.