A long slog to Nairobi 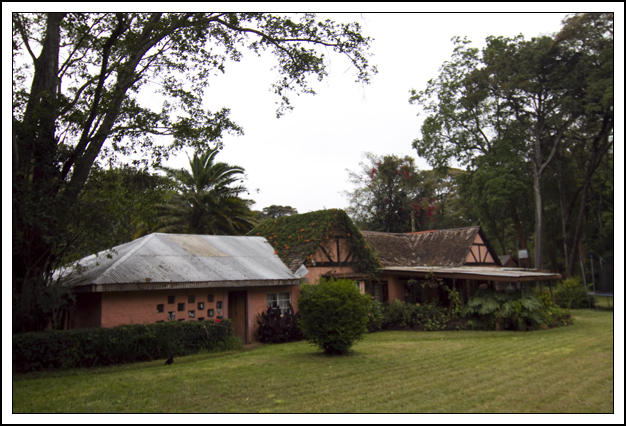 The Cottar family home in Nairobi. Photo by David Lansing.

The drive to Nairobi was hot and dusty. Our trusted Land Cruiser, which had done so well in getting us to Lake Paradise, seemed as tired as we were. On the long uphill climbs we crawled along at 20mph or less. At first Calvin thought it was just the weight of the trailer we were pulling and the grade, but when we stopped in Nanyuki for lunch, he had Eddie take a look at things and it was decided that the fuel pump was clogged. Probably from the nasty gas we had to buy in Marsabit before heading south.

Of course, you don’t go on an expedition like this without at least two of every crucial piece of equipment and Calvin had brought an extra fuel pump so while the rest of us ate burgers at Bernard’s in the Nanyuki Airport, Eddie spent an hour or so doing repair work. When we started up again, the car was running much better. “I should have done that hours ago,” Calvin said.

Initially we’d hoped to arrive into Nairobi around sunset but because of all the delays getting out of Samburu, that wasn’t going to happen. Calvin thought we’d be lucky to arrive by midnight. Which added to our anxiety. You don’t really want to be driving into or around Nairobi late at night.

Since we were getting into town a couple of days earlier than expected, I didn’t have a hotel reservation. Calvin graciously offered to let me stay over in their guest cottage at their compound in the Karen neighborhood. We were silent for a long time and then we talked non-stop for hours driving through the highlands south of Mt. Kenya until about an hour or so out of Nairobi when Calvin said I’d have to excuse him as he needed to get into his “Nairobi driving mode,” and then we didn’t talk at all as he fought and bulled his way through the dense Nairobi traffic as if he were a Formula One driver trying to gain the lead with just a few laps left.

It was dangerous and frightening and all you could do was let yourself go, knowing you had no control over anything that might happen, and be amazed at how he was able to out-maneuver mini-vans and buses and trucks and all the smaller, lighter, faster cars that, sometimes, he just pushed off the road in order to take control where two lanes became one or we fought to enter a round-about.

Shortly before midnight we pulled up to the metal gates in front of his compound just down the road from the old Karen Blixen farm, for which the neighborhood is named, and a small window in the gate was pulled back so that the night watchman could see who was there and we were let inside. His wife Lou, who has long worked for the United Nations as a negotiator and was just back from a mission to Sudan, was up waiting for us. We had a cold dinner of chicken and potato salad and a Tusker and then Calvin showed me to the cottage in the back. It was cold and damp, having rained earlier in the evening, and the cottage, which had been shut up for awhile, smelled stale and slightly moldy. An old fridge in the kitchen made such a rattle that I unplugged it. And then I pulled back the bedspread and fell into bed, not even bothering to undress, and for almost 12 hours slept dreamlessly for the first time since I’d come to Africa.