A party at the cemetery

There was a show over the weekend at the Instituto Allende celebrating art related to Day of the Dead. Most of the it was the bad sort of student art you see anywhere: a collage of razor blades with what looked like blood dripping from them; a Virgin made from beer bottle caps. That sort of thing. But I was quite taken by a rather large oil painting done by Jeffrey Brown. It depicts a man in a blue suit awkwardly holding a barefoot young woman whose breast rises above the folds of a green dress. Both their eyes are closed. She seems to be leading him on down the cobblestone street while the man in the suit looks like he’s trying to hold her back. And there, lurking just behind the two of them, is a grinning calaca—a skeleton. 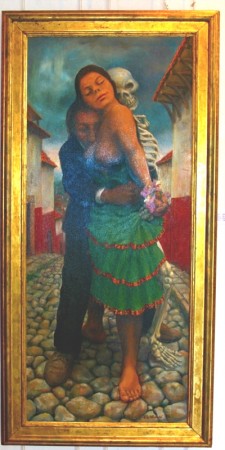 Of course, I could have it all wrong. And the artist doesn’t help, having named the painting Sin Titulo (Without title). I don’t know much about Brown except that he’s one of a handful of ex-pat painters in San Miguel who, it is generally agreed, is worth collecting. And if this particular painting had been for sale (it was being loaned from someone’s private collection), I would have snapped it up.

On Sunday afternoon, All Souls’ Day, I joined the throngs of people walking or taking the bus up the old road south of town to the cemetery, Panteón de Nuestra Señora de Guadalupe. There was a bit of a carnival atmosphere along the camino viejo with both sides of the street lined with vendors selling menudo and sopa de tortilla and pozole. There were old women hawking tamales from metal buckets and la gente indigena hovering over blackened caldrons of boiling chicken feet or pig knuckles. And everywhere there were vendors selling flowers, mostly the bright orange cempazuchitl but also the blood red cock’s comb and white daisies. 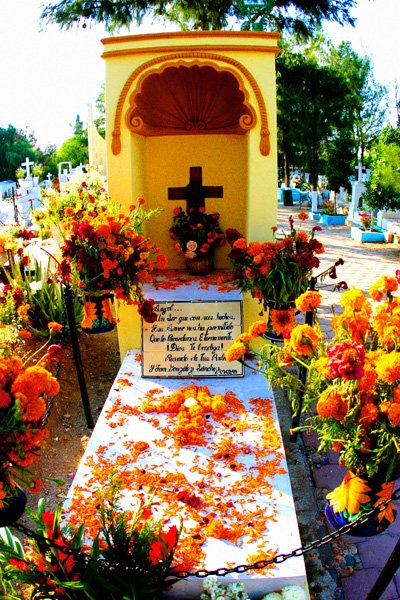 A decorated grave at the cemetery in San Miguel.

The cemetery itself was like an outdoor festival in a park. Families were gathered around the gravesites eating, drinking, playing the guitar. Sometimes you’d see two or three women with buckets and scrub brushes gossiping in high sing-song voices while giving the gravestones a good scrubbing. Some of the people had obviously spent the night here and now they were curled up, in fetal positions, napping on the ground or covered by blankets as they slept above their father or mother or little brother. If you lingered for more than a moment beside a decorated grave, the relatives of the deceased would insist you share a sip of tequila or perhaps have a tamale. There was laughter and music and lots of conversation going on, but there was no crying. At least none that I saw. 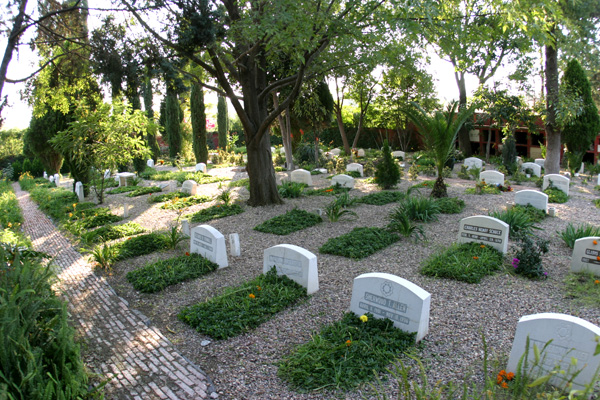 The lonely American section of the cemetery.

In fact, the only sad thing about the Panteón de Nuestra Señora de Guadalupe was the American section of the cemetery which was neither decorated nor visited. The markers here were simple (“Marie Von Horn Charlton, 1894-1987, Widow of Rear-Admiral Alex M. Charlton, U.S.N. Ret.”) the graves tidy, but it was so sterile and lonely here. You could just imagine the poor souls, like Marie Von Horn Charlton, hovering above the cypress trees that shade this part of the cemetery longing to join the party next door. It would be like never being invited to your neighbor’s fabulous parties.

After awhile, I’d seen enough and caught a taxi back into town. I’d planned to just eat some leftover chicken for dinner but there was something about seeing that American cemetery that made me desire company this evening. So I walked down to the Villa Jacaranda, which was very festive, and had a drink at the bar before sitting down for dinner. I didn’t know anyone here but it was alright. It was good just to be with other souls, even if we didn’t speak.