A Perfect Day for Bananafish

Yesterday was one of those Mexican afternoons when it is just too warm to do anything. So I took a book, Chronicle of a Death Foretold, which seems just right for San Miguel (“The brothers were brought up to be men. The girls were brought up to be married. They knew how to do screen embroidery, sew by machine, weave bone lace, wash and iron, make artificial flowers and fancy candy, and write engagement announcements… my mother thought there were no better-reared daughters. ‘They’re perfect,’ she was frequently heard to say. ‘Any man will be happy with them because they’ve been raised to suffer.’”) and climbed up to the Starlight Lounge, the cool outdoor living room on the roof of Casa Luna.

I love the Starlight Lounge with its long concrete bench decorated with green cushions along one of the walls and the strings of tin stars—estrellas—hanging from the roof beams. Dianne has an honor bar up here so you can grab a Negra Modelo or a Fanta if you want. Someone before me had poured themselves a glass of Mexican white wine but it had not agreed with them. Or perhaps, after they’d already poured it, they found it too hot to drink wine. A few small black bugs, buzzing around inebriated near the rim of the glass, seemed to be enjoying it just fine.

I’d been up there for about an hour and had almost drifted off to sleep when a young girl came bounding up the steps and plopped down on the end of the bench opposite from where I was spread out. 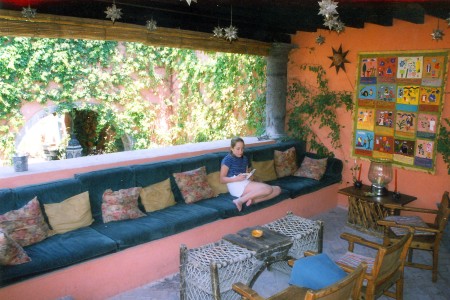 “Hi,” she said. She was carrying a black notebook and a copy of Salinger’s short story collection, Nine Stories, which just happens to be one of my favorite books in the world. When I was a sophomore in college, I took a creative writing class. I don’t remember the instructor’s name. He wasn’t much younger than us, maybe 25 or 26, and I don’t know what qualified him to be teaching fiction writing except that I think he had some connection to Ken Kesey, who lived nearby, and it was generally accepted back then that if you were friends with Ken Kesey, you were probably okay.

Anyway, what I remember about this teacher, other than the fact that he was buds with Kesey, was that on the first day of class, all he did was sit behind his desk and read aloud a short story by J.D. Salinger called “A Perfect Day for Bananafish.” I am sorry to say that at that point in my life, the only Salinger I’d read was The Catcher in the Rye, but I knew for certain the minute our young instructor finished reading that short story that I was never going to go to law school as I’d always assumed I would.

And I wasn’t the only one who felt that way. When the instructor finished reading the story, he was silent for a moment, the way a preacher might be in front of his congregation after making a particularly salient point, and then he smiled at his little class of 19- and 20-year-old wannabe writers and said, “Who here would someday like to write a story as good as this one?”

Of course, everyone raised their hand, including me. He nodded in appreciation.

“And who would like to be a high-flying trapeze artist in the Ringling Brothers Circus?”

Not a single hand went up.

The instructor took a very long pause. Then, in a very quiet, very serious voice, he said, “Well, I have some bad news for you. Y’all have a much greater chance of becoming trapeze artists than you have of writing anything even half as good as that Salinger story.”

Another long pause while this sunk in. “So if you want to drop this class, that’s just fine. For the rest of you fools, I’ll see you next week.”

That was a very long time ago. And I have written thousands of stories since then, but unfortunately not a single one has come close to the perfection of “A Perfect Day for Bananafish.”

Still, I keep trying. Though I haven’t necessarily given up on being a high-flying trapeze artist.

I’ll tell you about my conversation with the young girl reading Salinger tomorrow.