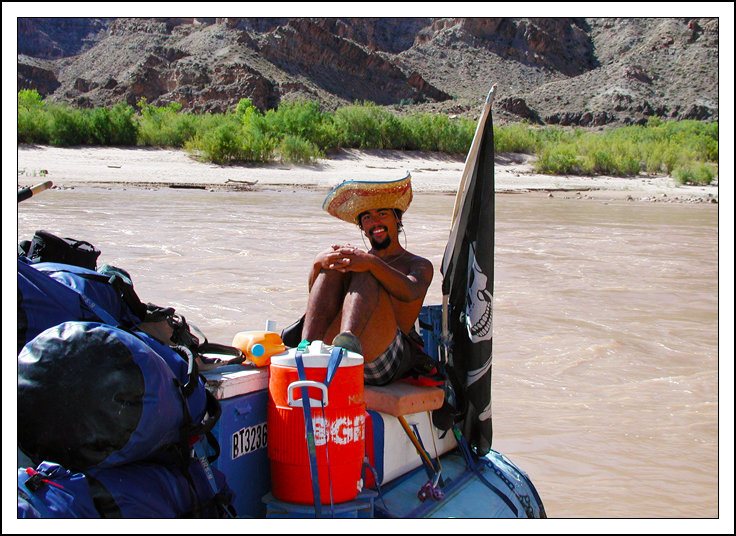 A belligerent sun smirks overhead as we drift like water skippers atop a soupy chocolate-colored river not far from where we put in at the Potash boat ramp early this morning. It is day one of our excursion down the Colorado, what our guide, Arlo, calls simply The River. The carrot at the end of our liquid stick—the hellacious rapids of Cataract Canyon—are 45 miles downstream.

I have to say that my initial impression is disappointing. This isn’t what I was expecting. When I first contemplated running the river, I imagined an extended roller coaster ride; several days of lurching, gut-wrenching rapids culminating in Cataract Canyon, so named by Major John Wesley Powell because “the declivity within is so great and the water descends with such tremendous velocity and continuity that (Powell) thought the term rapid failed to interpret the conditions,” according to the diary of expedition member Frederick Dellenbaugh.

Instead, our journey down Meander Canyon is as desultory as a kiddie’s pony ride at the state fair, as turbulent as the water in an inflatable wading pool.

To keep us from getting bored, Arlo tosses out crumbs of geological factoids, chumming for our interest. But none of us are biting. Each one of his fascinating details about the surrounding cliffs (“Those slab-topped pinnacles are white rim sandstone of Permian age”) is met with indifferent silence. It is too hot, too still.

We sip water. We spread Blistex over our lips for the millionth time. We ask each other—again—if we would like a stick of gum, some dried apricots. After a couple of hours, I ask Arlo if I can get out of our inflatable and float beside the boat. Sure, absolutely, says Arlo who, with his upturned sombrero and Pancho Villa mustache and goatee, looks like a Mexican pirate (he’s also flying a pirate flag on our inflatable which is ironically nicknamed “Paradise Lost”). So I pull on a faded-orange life-vest and fall off the back of the boat into the water. I float on my back, like a log. Drifting aimlessly down the river which is cool and refreshing. I close my eyes. It is so quiet and peaceful in the water that it is easy to imagine falling asleep. While floating. And it doesn’t seem such a bad idea.