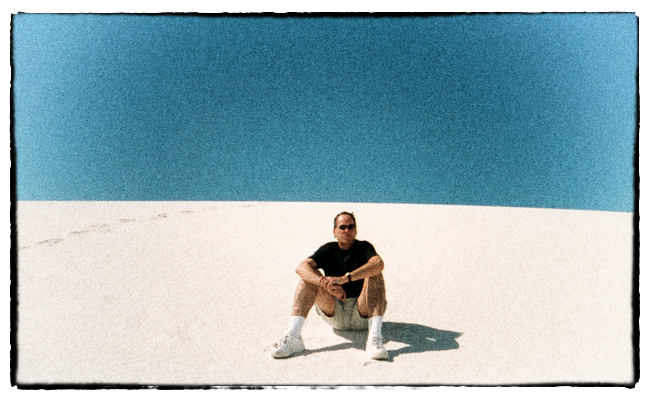 Just before the storm; alone in the middle of the dunes at White Sands. Photo by David Lansing.

If I were a raven, I could have flown due east about 30 miles to White Sands National Monument and been there in no time. But I’m not a raven. So instead, I have to drive south to Las Cruces and then take Highway 70 northeast until just before the Holloman Air Force Base which is home to the world’s longest and fastest test track and where they keep all the UFOs the government collects.

I’m just kidding about the UFOs.They do test a lot of bad-ass bombs and missiles and such out here, as well as train the pilots for the drones they use in Pakistan and Afghanistan and elsewhere. In short, it’s a little spooky out here.

An hour ago, when I parked next to the only other car in the lot for the Alkali Flat Trail, the sky was the color of bleached denim, the dunes so glaringly white in the staggering heat that even with a baseball cap and sunglasses, I found myself squinting hard as I trudged over powdery gypsum sand that, I supposed, was the trail.

Don’t get lost, I kept telling myself, pausing frequently to make sure Gardner Peak was still due west of me in the distant San Andreas Mountains.

Perhaps it was the softening of the early September light or maybe the almost indiscernible metallic smell in the faint breeze, but I could feel a dramatic change in the weather. The winds began to pick up, blowing stinging grains of sand against my ankles and legs. Wispy clouds of mare’s tail darkened in the southwest.

A desert thunderstorm was approaching. Time to turn around and follow my solitary tracks back through the barren interdunes that twist and turn through a maze of 50-feet-high sand dunes. The hair on the back of my neck rising, I hustled as fast as I could, hoping to get back to where I’d parked my car before the rain washed away any trace of my passing.