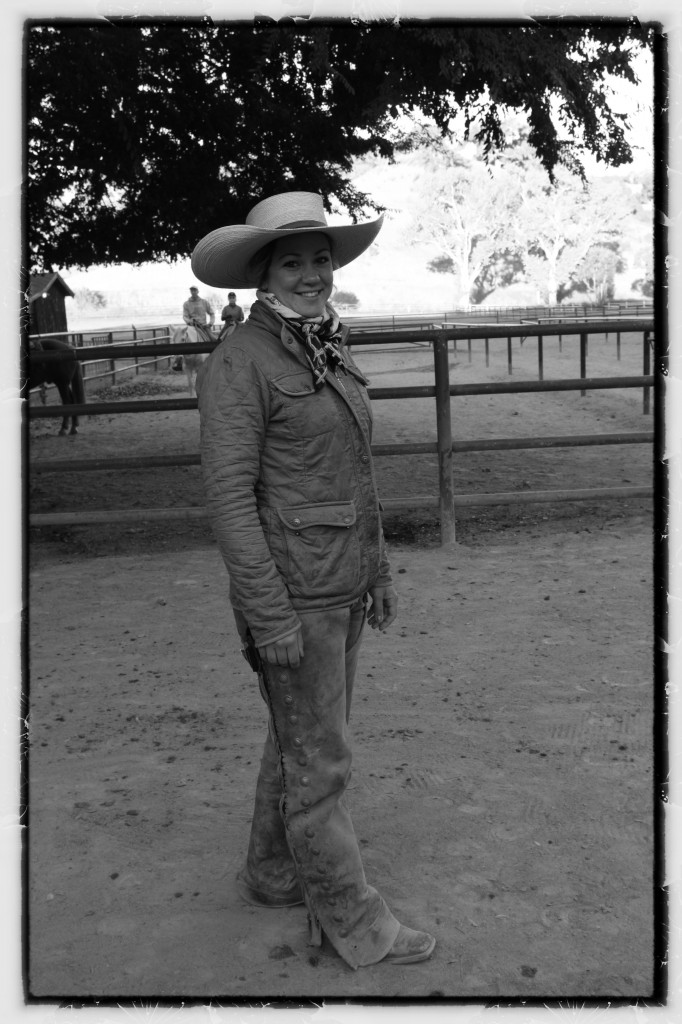 This here is Haddie. Haddie Stella Tal, if you want to know the whole handle. Haddie was the lead wrangler on our ride to the Old Adobe at Alisal. She’s a spitfire. Just before the ride, someone asked Haddie what kind of a cowboy hat was it she was wearing. Haddie thought about it for a minute and said, “I guess it’s a Haddie hat. I don’t know what else you’d call it.”

You see what I mean.

As Haddie says, “I’ve been doing this kind of work my whole life.” Yet she is only 27.

Haddie is engaged to another wrangler at Alisal named Jesse. Jesse James Townsend. Jesse also works the rodeo circuit as a team roper. Right now he’s at some rodeo in Reno or someplace like that. Haddie and Jesse plan to get married in Alisal’s rodeo arena sometime next year. They don’t know when, exactly. Haddie isn’t big on details like that. She says, “I want one bridesmaid to be in charge of the food and another one to take care of the flowers and someone else to figure out the music and such. So I can just show up and have a good time and not have to worry about anything.”

I asked Haddie if it was unusual to be a female wrangler. “Not here,” she said. “During the high season (summer) when we have maybe 17 wranglers, 11 of them will be women.”

Like me, you might wonder why that is. Haddie has a theory: “Alisal is a very family-oriented place, with lots of kids, and women wranglers just seem better at interacting with the kids. And we’re softer with the horses.”

I asked her what that meant–being softer with the horses. “Our voices are softer, our manners gentler. I guess you could say we pay attention to the details more than the guys.” Not that she thinks there’s anything wrong with her male counterparts. “They’re the best in the industry,” she says. Still, she thinks the female wranglers might just be more suited to the job–at least here at Alisal.

I asked her what was the best part about being a wrangler and she said, “Seeing the kids develop.” She told me this one story about a little girl named Maddie who came to Alisal the first summer Hattie worked here. “She was eight and had never been on a horse before and we spent the week together, me teaching her how to ride, how to respect horses. She’s come back every summer since. Now she’s 12 and she’s got her own horse at home and sends me pictures of the two of them. I love that. There’s just something about little girls and horses. I don’t know what it is, but it’s there. And it’s magical.”

Having spent the morning riding with Haddie, I’d have to agree.