No doubt you’re wondering, Where exactly is Niue? If I told you that it was approximately 550 miles west of Rarotonga, would that help? I thought not. So let’s try this: Get out one of your many maps of the South Pacific and draw a line due east from Tonga and another line south from Samoa. Where they cross is Niue. Still, you probably won’t see anything on your map because Niue is only 104 square miles. In short, Niue is little more than a speck in the deep blue sea, an ocean pebble as it were.

In fact, the ring road that circumnavigates the island is only 30 miles long. You can drive completely around the island in about an hour. Yesterday afternoon I drove round the island twice. Just for the hell of it. There’s something slightly disconcerting about being able to go around an entire island is an hour. Particularly when you’re only driving slightly faster than most people can walk.

I picked up my rental car yesterday in Alofi, the only real town on the island. It took awhile because first I had to get a Niue Island drivers license. Sarah, who was running the rental office, walked me back to a little building in the back that also happens to be the office for the police. It costs NZ$10 to get a driver’s license. They don’t ask you any questions about the rules of the road or ask you to parallel park. Basically they just need the $10 to help pay for the police department. And in return you get this very cool full-color Niue Island driver’s license, which is probably the best souvenir on the island. (It’s interesting that while you need a Niue Island driver’s license to rent a car, you don’t need any insurance; in fact, they don’t have car insurance on Niue.) 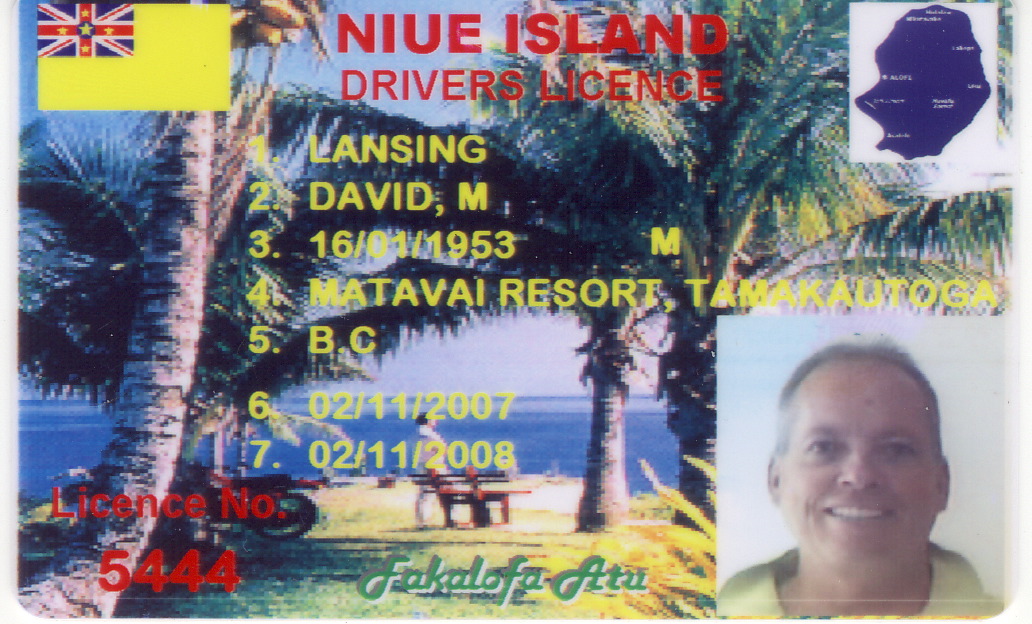 After I got my driver’s license, Sarah gave me the keys to a little 2-door compact. She also gave me a slip of paper titled NIUE RULES.

RULE ONE: Always drive on the left hand side.

And so on. I didn’t read all the rules. Which was a mistake. Instead, I headed out of town and along the northwest coast to Avaiki where I’d heard there were some spectacular underwater caves. I pulled off the dirt road and parked my rental in the shade of a couple of coconut trees. When I got back from my hike down to the caves, there was a big honkin’ dent in the hood of my car from a fallen coconut. Shit. That’s when I noticed RULE SIX on the rental sheet Sarah had given me: Never park your car under a coconut tree.

Oh well. At least my insurance rates on the island won’t be going up.