An aperitif in Kinsale 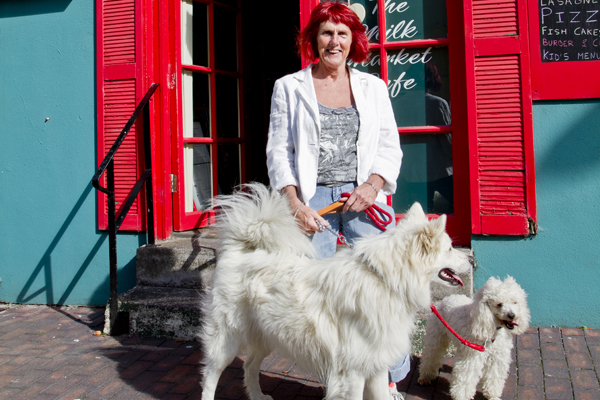 Fine evening walk along the Kinsale harbor. Children playing along the low wall as their mother calls to them to stay within sight. Older gent sitting in a decrepit lawn chair on the bow of his dirty sailboat—Do-More—sipping a drink. Whiskey? Red-faced, purple nose, thread-bare sweater the color of new hay, faded old baseball cap on his head. By himself. Still. Not half bad. Does he ever sail the old girl, I wonder, or just use it to get away from the world and enjoy his sunset dram in peace?

Could never live on a boat. Everything damp, wet. Closed quarters. Too much time with yourself is what it is. Bad company to be with yourself so much. But the drink is inviting. Should find a nice little bar before dinner. Have a glass of wine or something.

Hardly anyone out in town. Tourists have all gone home for the day and must be too early for the locals. On the corner is a white building with a little mural of a waiter in black vest and bow tie carrying a glass of wine. Apéritif. Pop in. Nice looking place. But nobody here. What time is it, anyway? After five. When do they start drinking in Kinsale?

Two women inside: one drinking, the other pouring. The one drinking has the most shocking bright red hair I’ve ever seen. The color of a candy apple. Just as bright and shiny. Pale, freckled skin. Maybe fifty. Maybe sixty. Never good at guessing women’s ages. Twinkle in her blue eyes. The other—the bartender—looks Scandinavian. Blonde, dark eyes, perfect teeth (now that’s a rarity in Ireland, isn’t it?). Busty.

Do you serve wine by the glass? I ask.

We’d better; we’re a wine bar, says the candy apple redhead, laughing. Sticks her thin, pale hand out. Kate, she says. I run the place, although there’s not much to run at the moment. Laughs at her own joke, takes a sip of her white wine.

What is it you’re drinking, I ask her.

Pinot gris. It’s not much but it’s all right. Fancy a glass?

The young blond bartender has yet to say a word. She grabs a bottle stuck in a tub of ice and pours me a glass while turning down the music on an iPod.

Awfully quiet in town, I say.

It’s a bit early, says Kate. Not for me, of course, she says, sipping her wine. And where are you from then?

California, I tell her. 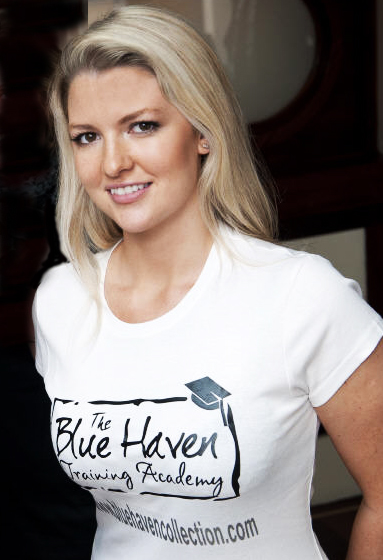 Sophie, the bartender at Aperitif in Kinsale.

I love California, says the bartender, drying wine glasses. She introduces herself. Sophie. Sophie Kavanagh. Shakes my hand and it’s cool and delicate and very white. The three of us get to talking and suddenly I’m telling them stories about getting lost trying to find my hotel when I could see it from the tourist office and Kate laughs and slaps the bar and says, I don’t believe you! It’s true, it’s true. I stand up to go and Kate grabs the bottle of wine from behind the bar and says, Let’s just top this off a bit—on the house. What are you doing in Kinsale then?

I’m a travel writer, I tell her. Here for a few weeks in Ireland. Gawd I’d love to have your job, says Sophie, putting up a bowl of nibbles on the bar. Did you like Dublin then, says Kate. It was grand. I tell her about getting lost trying to get out of Dublin and how we grabbed the GPS monitor off the windshield and threw it in the boot because the gal giving us directions was a bit of a bitch.

I don’t believe you! says Kate, laughing. God, she’s a good one to tell a story to. I tell her I should probably be going and she puts a hand on mine and nods to Sophie and the bottle comes out from the ice tub and my glass is topped up again. Where are you going from here? she asks. Tell her about Dingle and the Cliffs of Moher and the gypsy caravan. Although, I say, I’ve been told you can’t say gypsy in Ireland.

Bloody rot, says Kate. Say it if you want. We won’t tell. But I’ve never heard of renting a gypsy caravan. Where’d you say this is?

More stories. More wine. An hour later I tell Kate and Sophie I really do have to go or I’ll need a long nap before dinner since I’m already half-tight. Guttered. Sozzled. Oh, that’s a good one, isn’t it? says Kate. Sozzled. Haven’t heard that in awhile. Do you know your way home? asks Kate. Yes, but that doesn’t mean I’ll find it.

I don’t believe you! says Kate. Give her my card. Take hers. Take Sophie’s hand and thank her for the wine. Enjoy your evening, she says, flashing me her brilliant white smile.