At Zephyr, Mijune orders for two 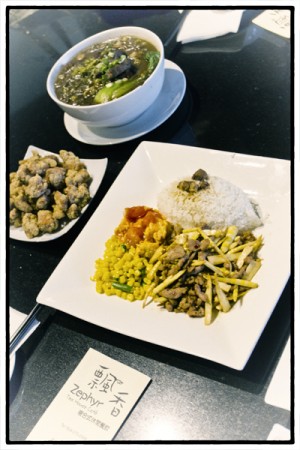 I might have mentioned that Mijune doesn’t bother to listen to me when it comes to deciding where to go eat or even what to order. I could take this one of two ways: outrage or with a shrug. I prefer the latter.

Yesterday she told me to meet her at Zephyr Tea House Café for lunch. Which was fine with me since it’s just down the street from my hotel. She also tells me to be there promptly at 12:30. “Don’t be late!”

So exactly at 12:32, I walk into Zephyr. And there’s Mijune sitting at a table with at least half a dozen dishes in front of her.

As if she was going to let me order in the first place.

I don’t think Zephyr is really known as a lunch place. It’s more like the place you go to late at night when you’ve got the munchies (they’re one of the rare places in Richmond that stay open until 1am on weekends).

So what did Mijune order for us? The Taiwanese-style popcorn chicken, of course, and the braised pork on rice, prawns with pineapple, shredded pork with bamboo shoots, and a Taiwanese sausage with noodle soup.

You know, just a couple of dishes to stave off the hunger pains.

The popcorn chicken was kind of addicting, but I hated myself for liking it since it reminded me of a slightly-less spicy version of KFC’s popcorn chicken (which is also addictive if some of the worst processed junk food out there). The other dishes were okay. Not great, but okay.

What was more interesting to me were the drink choices. There were like over 30 bubble teas and another 30 frappes. Mijune watched me agonize over the menu. Matcha green tea frappe or almond milk bubble tea? Green mango mint? Lychee peach?

When I gave her the stink eye she said, “What? It’s the house specialty. You’ll love it.”