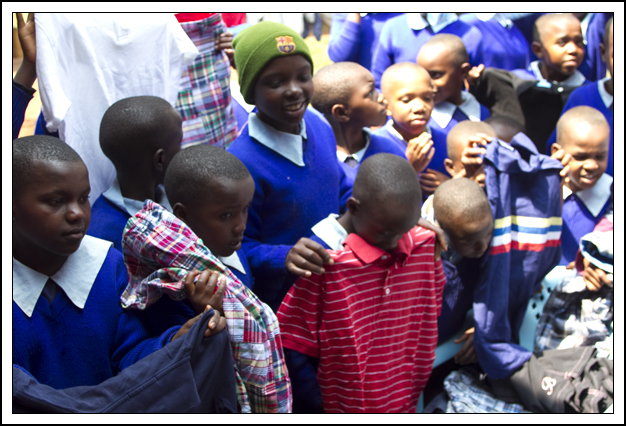 Cura orphans, the new fashionistas of Nairobi, get clothing from Bonobos. Photo by David Lansing.

One of Pete’s photography clients is Bonobos, a very cool e-commerce clothing store, primarily for men although they’re now launching a women’s line of clothing as well, whose mission is “to banish the saggy bottom.” I don’t get a nickel or even a free sample from Bonobos, but I do own some of their pants and shorts and can tell you they’re just about the greatest fitting clothes I’ve ever owned.

Anyway, Pete told Brian and Andy, the co-owners of Bonobos, that he was going on an expedition to Africa and that maybe they should give him some of their gear to shoot over there. And they said cool. Then he mentioned, at the last minute, that we were also going to visit an orphanage in Nairobi and they said, Hey, why don’t you take some shirts and shorts to the kids. So he did.

Now, while Bonobos is getting ready to launch of line of women’s clothing, they’re nowhere close (as far as I know) to doing kid’s clothes. So Pete knew going in to this that everything was going to be a little large. Or even a lot large. But, you know what, Moses didn’t care and neither did the kids. They were just thrilled to get the new clothes. Even if the psychedelic board shorts and plaid polo shirts were a little out there compared to their usual uniform of blue-on-gray. Who knows? Maybe these little guys will start a whole new trend in Nairobi fashion.

And if you’re truly concerned about orphans in Nairobi wearing preppy clothing designed by a couple of guys from the Stanford, well just remember that for only $52.80 a month, you could not only clothe but also feed and educate one of these kids. And send him or her your own clothes. And to find out how to do that, check out the Cura Orphanage here.