Breaking in to Old Head When you get to Kinsale, says Mr. O’Connor, you should wander out along the coast to the Old Head golf course. It’s stunning. Just have a wander out to the lighthouse. Shouldn’t be a problem. Just tell them you want to have a look.

So off to Kinsale we go, winding along the road as it dips down to the harbor and then out to the green countryside, following the signs to Old Head. Reach a gate thrown up between some stone ruins and a young lad comes out of a guardhouse, clipboard in hand. When he asks for our name Mr. Lynch tells him we’re not here to play golf, just to have a look around. Have a look around? repeats the young lad. Sorry but it’s a private course, says he.

We don’t want to play the course, I tell him, leaning across Mr. Lynch and poking my head out the window. We just want to have a look at it. Five, ten minutes at most and we’re out of your way.

One minute says our nervous charge. He runs back into the guardhouse and rings up someone on the phone. A few minutes later he’s back. So you’re journalists? he asks. That’s right, we tell him, showing him our cards. He holds them in his hand without looking at them and says, Right, but the thing is, this is a private course.

Come on now, says an exasperated Mr. Lynch. Five minutes is all we want. The lad runs back into the hut, gets on the phone, has a long chat and returns to our car several minutes later. Quickly, he says, opening the gate. Very quickly, please.

God, what was that about? says Mr. Lynch as we drive out the peninsula, the Atlantic Ocean visible on all sides. Willie and Kate aren’t in Ireland, are they? Does Willie play golf? I ask. Maybe not, says Mr. Lynch. Should do, though. I’ll bet Kate would look fine standing over an old putter, don’t you think? 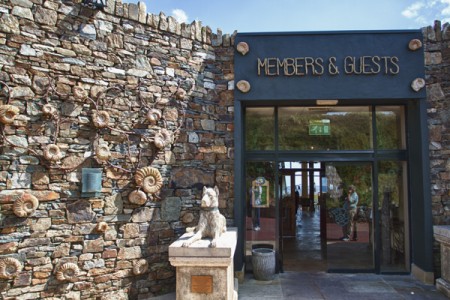 The guarded entrance to the clubhouse at Old Head. Photo by David Lansing.

William and Kate may not be here but something is going on. There are beefy looking men in suits and sunglasses with earpieces staring at us as we park and a Scottish bagpiper is warming up next to a long limo. Best be quick about this. Past an imposing clubhouse guarded by two stone mastiffs at an entrance warning it’s only for Members and Guests—neither of which we are. Down the hill to the cart path leading to the 18th green. I start to head down it. I wouldn’t go down there, advises Mr. Lynch. Nonsense, I say. Just want to have a quick look. Not advisable, says Mr. Lynch.

A foursome is just coming up the green with their caddies. One of them—a lad no more than 17 or 18—sees me walking down the path. Hey! he shouts. Hey! As if I’ve just stolen his car. I fire off two quick photos and quickly retreat as the caddy continues to yell Hey! Hey!

Off we go, I tell Mr. Lynch. Hustle back past the stone dogs and to the parking lot where the men in suits and sunglasses are now standing around our car. Mr. Lynch smiles at them and says something about it being a lovely day. Silently they part to let us in our car. We grin like idiots as we pull out of the lot.

When we get back to the guard shack, the young lad is more nervous than he was when we first arrived. We roll down the window. Thanks much, says Mr. Lynch. You didn’t go out on the course now, did you, asks the lad. Of course not, says Mr. Lynch. And the gate is shut and locked behind us.