Can you eat too much shellfish?

Sonia seems worried about me. After I wrote about eating lots and lots of yummy soft-shell clams and a crate of oysters, she wondered if it wasn’t possible I might get some kind of poison from eating too many shellfish. “Because you seem to eat a lot of it.”

Well, Sonia, yes I do. I do eat a lot of shellfish. In fact, I think it’s safe to say that any time I have an opportunity to have a marine mollusk or two—whether it be oysters, clams, mussels, scallops, cockles, periwinkle, or geoducks—I’m going to Just Say Yes!

Take yesterday, for instance, when Stephen Steward, who runs a little company called the Confederation Cove Mussel Company, which processes and exports about 200 million mussels every year, offered to take me out onto New London Bay where the company has 1,500 acres under production to show me how they grow. 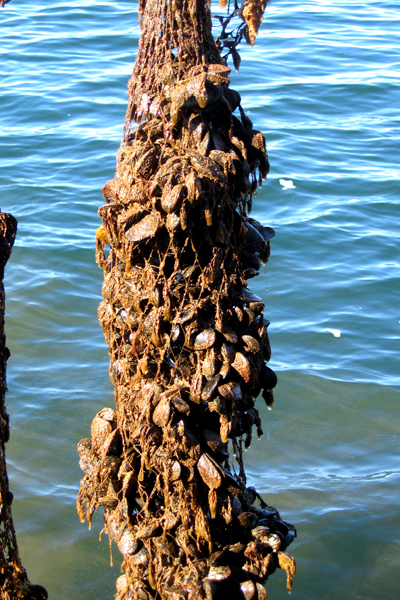 A mussel sock with 25 pounds of bivalves growing in New London Bay. Photo by David Lansing.

Frankly, it’s all kind of boring so, lucky you, I’m going to condense my three-hour tour into a couple of sentences. First off, they get what’s called a mussel sock and fill it with thousands of seed mussels. Then they hang about 400 of these mussel socks along 600 feet of line across Confederation Bay. They do this so the mussels are free of sand and mud from the bottom and have easy access to their favorite meal: plankton.

Two or three years later, the mussels are all grown up and the socks get pulled off the lines and sent to an enormous warehouse where they’re cleaned and sorted by size.

The mussels Confederation Cove I watched being harvested yesterday morning were processed and shipped later that day to JFK or Logan and then, overnight, flown all across the U.S., arriving the next afternoon, for instance, at a restaurant in San Francisco or Los Angeles, which is pretty amazing when you think about it.

Fortunately, I didn’t have to go to L.A. or even New York to sample some of Stephen Steward’s mussels. Instead, last evening we went to Flex Mussels, a tiny, cedar-shingled restaurant owned by a New Yorker who thought it only appropriate that the island that exports 80 percent of all the cultured mussels in North America should have a spot pretty much dedicated to the little buggers.

Now this is where Sonia comes in. Because when you are on an island known for their mussels and dining with a man who makes a living growing millions of the little suckers and he takes you to a restaurant specializing in the bivalves, well, you’re probably going to eat more than your fair share. 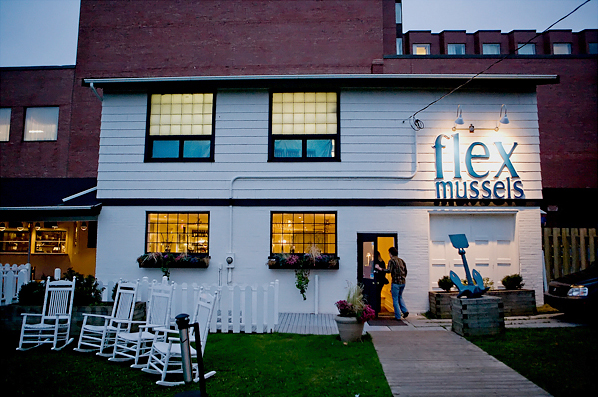 Photo by Chris Ramirez. Check out his other great photos at www.ramirezpix.com.

Because Flex doesn’t just do the classic French “mussels-in-white-wine-and-herbs” dish (although they do do a nice version of that). They serve mussels with prosciutto and caramelized onions; with lemongrass, coriander, and ginger; Indian curry, star anise, and cinnamon; and basil, pinenuts, and parmesan.

And that’s just to start. There’s a Mexican version with chipotle adobo, a Jamaican dish with hot peppers and rum, and a Spanish adaptation featuring chorizo and green olives. You can get mussels with sake and pickled ginger, smoked bacon and mushrooms, and country ham and bourbon.

And, of course, Stephen thought we should try them all. Or at least as many as we could. And I’m here to say that we got through all the ones I’ve already mentioned. But there were at least a dozen we didn’t try.