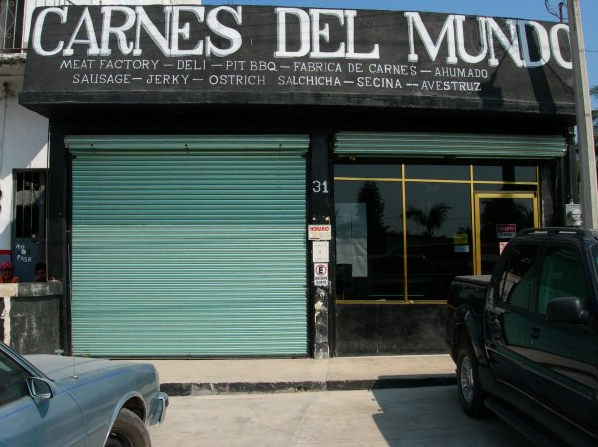 So for several days the Blue Whale has been at Gecko, which is a small little rental car agency just up the block from the butcher store called Carnes del Mundo which is probably the only place in all of Nayarit where you can buy guanciale, ostrich jerky, British bangers, and corned beef. It’s owned by Kyle and Irma and I don’t know what brought them to Bucerias or how they possibly make a living selling bratwurst and smoked tongue but then again I don’t know how the guy who I see every day walking up and down the beach selling candied apples for ten pesos makes a living either.

Anyway, since I don’t have a car at the moment, I’ll walk along the beach into Bucerias, passing the candied apple guy and another guy pushing a wheelbarrow full of candy along the sand, until I get to the Italian restaurant on the beach, Mezzogiorno, where I take the little path up to the street that marks the northern end of Bucerias. And then I’ll walk several blocks past all the other beachside restaurants like Aduato’s and El Brujo until I come out at the plaza which is the center of town.

Here there are many diversions, from the little shop selling paletas to the taco vendors across from the church to the guy that makes churros with caramel in the middle. And if it is hot and you do not feel like something sweet, you can always go into the mini-market and buy a cold beer and sit on one of the green benches in the park and watch the old men sleeping in the sun and the children chasing the pigeons. In short, there is plenty to do in Bucerias.

Eventually I will walk up to the lateral road that runs beside the highway and go as far as the dry riverbed where the highway passes above a shallow bridge and cross over into the barrio and walk up the street to Gecko and ask Dennis how things are going with repairing my car and he will say fine, beautiful, they think they know what the problem is, that it is the rotors or maybe the calipers or maybe there is a leak in the master cylinder or perhaps it is something else completely and if they can just hold on to the car for a few more days, they should be able to fix it. This is what I have been hearing for several days now. And there is really nothing you can do about it. All it really means is that the mechanic has been busy with other work and he will fix your car when he can fix your car. You must be patient. Not being patient in Mexico is a great sin. So you thank Dennis for his time and ask him how the fishing has been lately, because Dennis loves to go out fishing for marlin or dorado more than he likes running a rental car agency, and he will tell you how many dorado he caught yesterday and tell you that you should go out fishing with him some time. “It’s very relaxing,” he says, and from the looks of him, I believe it.

And then you walk further up the hill to Carnes del Mundo and say hello to Kyle and admire the thick, American-style rib-eye steaks in his upright freezer and maybe buy a coil of Cuban longaniza, though you’re not sure what you’ll do with it, and talk a bit about the Super Bowl, which neither of you saw or care about, and then you head back into Bucerias and down to the beach and spend an hour walking home where you slice up a bit of the longaniza and have it with a cold beer and congratulate yourself on having had a particularly busy and fruitful afternoon.