You are currently browsing the archive for the Arizona category.

Rocco’s guide to being a cowboy

Does it surprise you to know that Rocco has a book out on how to be a cowboy? Well, it shouldn’t. As Rocco himself says in Cowboy, cowboys are savy businessmen. “Ranching is all about raising cattle—from insemination to birth to the time they’re sold at market. In theory it’s simple. But when it comes to running a ranching operation, the strategy and management necessary to turn a profit are anything but elementary, and they certainly aren’t for the faint of heart. There are horses and cattle, branding and calving, the commodities market, conservation, and stewardship. The smallest details can mean the difference between life and death and riches and poverty.” A Western offense: “Never ask a rancher how many head of cattle he owns. That’s like asking a person how much money he has in the bank.”

Don’t look back: “In the Old West, when strangers passed each other on the trail, they never turned around to look at one another after passing. To do so was considered cowardly and an insult if either stranger turned out to be a good man. The same rule applies today.”

Cowboy trivia: “Those who headed west to work cattle were male, typically thirteen to eighteen years old, of European descent, and, on many ranches, required to be single.”

Cowboy chow: “When dining on steak, cowboys go for bone-in rib eyes and New York strips, always prime or choice grades, that are fried in a cast-iron skillet. The bone imparts added flavor to the end product, and the skillet allows the beef to bathe in its delicious juices while cooking—both adding tremendously to the cowboy’s eating experience.”

Graduation day at Cowboy U In search of lost doggies.

It’s graduation day at Arizona Cowboy College. In order to get our diplomas, we need to ride out into the desert to help George, a 75-year-old rancher and neighbor, round up a dozen or so meandering cows. The day is hot and the ride through prickly cholla and scratchy mesquite dangerous.

We ride for hours, up and down drywashes looking for strays snoozing beneath the shade of some scrub. Viejo knows exactly what he’s doing. Me, less so. But Viejo and I have now come to an arrangement: I just let him do what he’s good at and don’t bother him too much.

I spot a cow and give the Old Cowboy the gentlest of nudges and he canters off, picking his way through the desert with no help from me, herding the lost doggy back into the fold. Together Viejo and I find five lost cows and head them back safely to George’s ranch.

By the end of the afternoon, my muscles ache, my skin is chaffed, and my eyes are dry and red. But I’ll tell you what—when Rocco hands me my Cowboy U diploma, I feel like John Wayne.

The zen of horses

I’m trying to figure out what it is about horses but I’m not there yet.

About a month ago I wrote about a Jeep tour I took in Sedona. It was a vortex tour, a vortex being a “giant magnet of energy that is either positive or negatively charged. Positive charged vortexes have feminine attributes: nurturing, calming and tranquil or yin. Negative vortexes are masculine, active, energizing or yang.”

That’s from the website of the Sedona Vortex Tours company.

Anyway, my vortex guide, who wore a black hat with a rattlesnake skin around the crown, was a guy from Minnesota who used to own a Dairy Queen. There were a lot of people in Sedona like that.

Anyway, let’s get back to the Arizona Cowboy College. I’ve been thinking all week that Rocco is an odd name for a cowboy, even if that cowboy is the most macho vaquero since Clint Eastwood saddled up a pony in The Unforgiven. So I asked Rocco about it.

As it turns out, Rocco used to be a grocer in New York. I guess he had a bit of a mid-life crisis and decided to move to Scottsdale in the early 80s. “I loved the desert and I have a passion for horses,” he said. “I decided what I wanted to do was to get people who did not know much about horses to appreciate them. If I can get one more kid, one more adult, five more people to just get it about horses, I’m a happy man.”

Well, I don’t know if I get it about horses yet. But I’m getting closer. 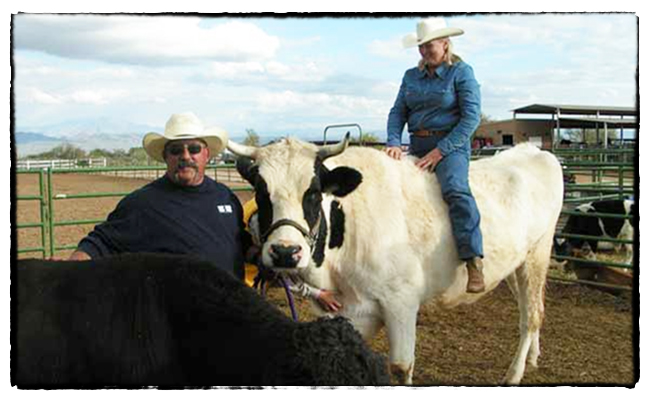 Rocco with Lori on one of their Brangus bulls. A pot-belly “attack” pig snoozing at the back door.

Teaching greenhorns how to be cowboys isn’t the only thing Rocco and Lori do on the Lorill Ranch, the campus of Arizona Cowboy College. In addition to the 40-plus horses on the ranch, there are half-a-dozen border collies and Australian shepherds, 9 mini-horses, 2 wild BLM mustangs, a potbellied pig, a cow, assorted chickens and roosters, and 5 breeding Brangus bulls.

A Brangus bull is a cross between an Angus and a Brahman. They’ve been breeding them for a hundred years but they didn’t really take off until the 40s when the government got involved in breeding the bulls at their Experiment Station in Jeanerette, Louisiana. This was during WWII when beef was a tough commodity. The USDA was looking for a good-eating animal (the Angus) that also had the Brahman’s natural ability to thrive under adverse conditions. Thus the Brangus.

It’s not unusual for breeding bulls, such as the ones Rocco and Lori raise, to be worth $10,000 or more. Sometimes a lot more.

In a story two years ago in the Smithsonian magazine on breeding bulls, they quote one Donnell Brown, a fifth-generation ranger from Texas, who designed a bull, “chose the semen, selected the dam, prepared and inseminated the uterus” and named the “astonishing bull with a handsome, wide muzzle, stunning scrotal circumference and a square frame solid as a sycamore” Revelation.

Said the bull breeder, “We don’t intend to present this bull as divine, but we do count it a blessing to have raised him.”

He eventually sold Revelation to a Houston businessman with a weekend ranch for $12,000. No bull.

An introduction to roping Yesterday at Cowboy College, Rocco showed us how to swirl a lasso over our heads and, using a dummy cow on wheels, rope a steer. It’s an odd thing, twirling a lasso. You either get the feel for it pretty quickly or you don’t. And it doesn’t really have anything to do with how good of a horseman or athlete you are. The most natural cowboy out here just could not make that lasso do what another fella who still hasn’t figured out how to properly put on a saddle could.

I’ve got to admit, I wasn’t half bad. When it came time to try it out on some live cows, Rocco had me go first. And I nailed that lil’ doggie on the first try.

I’m starting to like this cowboy business. As long as I can stay off my horse.