You are currently browsing the archive for the Rocky Mountaineer category. 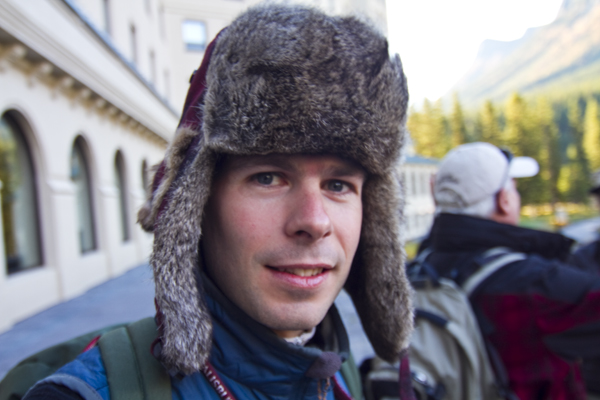 I feel like the only urban guy in this group (even though Erika is from NYC). This morning around breakfast, everyone was talking about walking sticks and ski clothes that heat themselves and their favorite hiking boots. The king of the woodsy geeks has got to be Michael. He’s the only guy I know who would not only come down to breakfast wearing a fur-lined buffalo plaid troop hat but also look pretty good in it (if I wore it, I’d look like Dan Ackroyd in a comedy sketch about whacky Canadians).

Michael lives in Portland, Maine, and when I told him how sorry I was that he was stuck there, he said, “Hey, I love winter…I mean I love winter.”

Well I do too. I just don’t like rain and snow and minus ten degree days and nights that last 18 hours. I don’t like muck boots and the smell of always-wet wool coats and slush. What’s to like about slush? But Michael lives in Portland, Maine, because he’s a pinhead; he likes to hike up the side of frozen mountains, his skis on his shoulder and an avalanche beacon in his backpack, listening to the sound of his blood surging through his veins like a train going through a tunnel, and then telemark down through snow so thick that if his ski comes off, he just abandons it and continues on down the mountain on one ski because there’s no way in hell he could ever find the lost ski or dig it out even if he did.

That’s the kind of a winter dork Michael is. 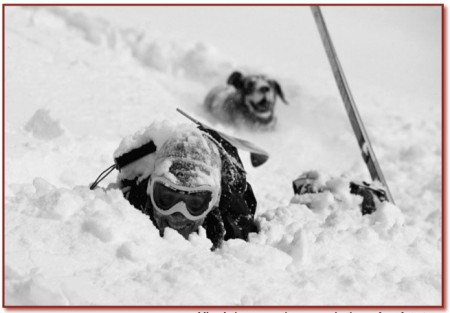 Michael works for a pr company called Pale Morning Media whose tag line is “Public relations for the outdoor world.” If you click on the tab ABOUT Pale Morning Media, you’ll see a picture of a guy who has crashed and burned while powder skiing. He’s up to his chin in snow and his skis are at such angles that surely his legs must be dislocated if not snapped. Oh, and he’s smiling. Is it Michael? Could be. If it’s not, it’s something Michael would do. Their clients include Kelty, Primus Camping, Simms Fishing Products, and, of course, Woolrich. All über-geek outdoor companies. The perfect match for Michael. Still, for all his plaid-flannel-moccasin-fleecy geekness, I have to say he’s a lot of fun to be around. And I rather like him. 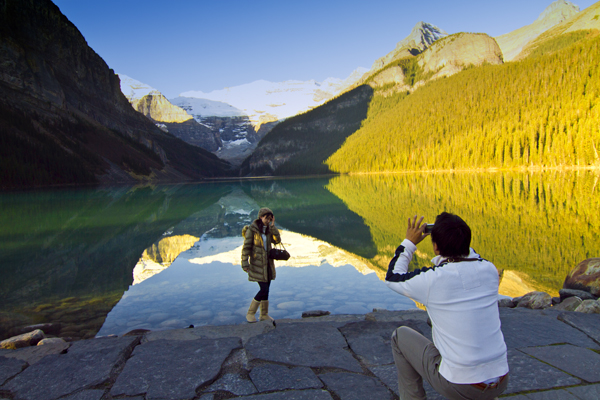 Early morning around the shores of Lake Louise. Photo by David Lansing.

We didn’t arrive at Banff until after 7:30 and by the time we transferred to the Fairmont Chateau at Lake Louise it was well after 8. There was still some light in the sky and the setting was obviously gorgeous but it wasn’t until the next morning when I got up and put on layers and layers of outdoor clothing (it’s clear but cold up here) and walked out of the hotel that I really got the whole take-your-breath-away view of Lake Louise with the glacial peaks as back drop.

The sky was that deep blue you only get at higher elevations and the air was so crisp that it seemed to burn the tips of my ears and nose. But what really strikes you is the quiet. You stand there trying to take in the vastness of the sky and mountains and the lake which looks dark in the early morning light and mirrors back everything around it: the trees, the glaciers, the mountains, the sky.

It’s a funny thing about a setting like this. Everyone whispers. It was as if we had all just walked into a big European cathedral. You walk slowly and carefully around the edges of the lake, using your inside voice, nodding and pointing at the blue gray glacier at the end of the lake or an osprey floating in the thermals overhead. But you keep your voice down. And there’s nobody running around. Not even the kids.

It’s a setting so magnificent you are just naturally reverent. I took a few photos of a Japanese couple taking photos of themselves in front of the lake, wishing my camera wasn’t so noisy, and then went in for breakfast at the hotel’s brasserie, taking a seat right up against the window so I could continue looking out at the lake as the sun arched up over the mountains. It was like being in Mother Nature’s cathedral.

Just a reminder that tomorrow I’m going to randomly pick a couple of numbers that link with the e-mail addresses of my readers to win some Woolrich swag. There’s still time to enter. Just send an e-mail to david@davidlansing.com and in the header put “Woolrich.” You don’t have to put anything in the body of the e-mail except your name. As I get each e-mail, I will assign it a number from 1 to whatever. And then on Friday afternoon, I’ll ask Michael Collin at Woolrich to “pick” a number and whoever has that number will be notified to contact Michael directly and they’ll have Woolrich ship your vest or check shirt direct from Woolrich, PA. So send me an e-mail (and I promise that those e-mail addresses will not be used for anything other than to enter this contest–really!). 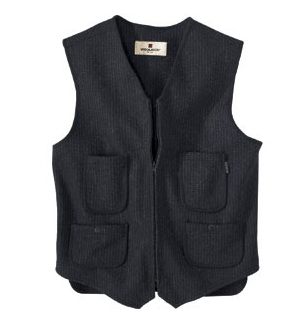 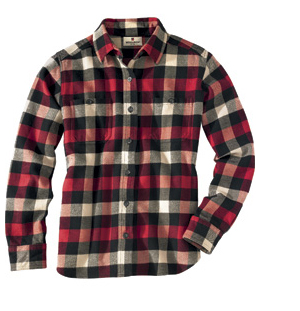 Salmon spawning and a bear feast 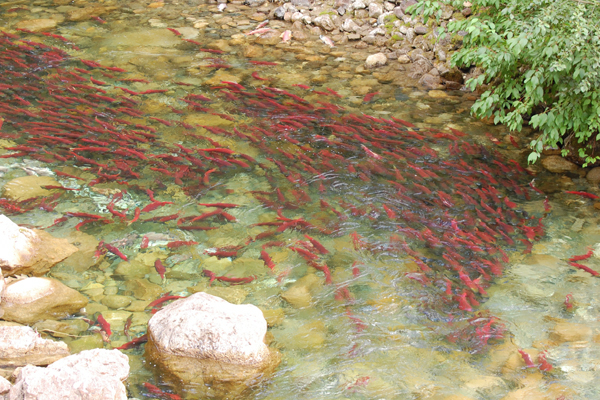 Thousands of salmon making their way up a stream in the Canadian Rockies. Photo by Matt Casselman.

One of the things that has been the most interesting to me on this trip is how much wildlife we’ve seen as the Rocky Mountaineer train chugged up the steep grade of the Selkirk Mountains towards the Bow River and the Continental Divide, the highest point on our trip. We’ve seen moose and elk and deer and a couple of black bears (including one sitting on the side of the tracks watching us slowly pass by; he was so docile that we all swore he had to be some sort of Disney animatronics).

But I guess the most amazing sight to me has been watching the thousands and thousands of spawning salmon in the creeks and tributaries of the various rivers we’ve run along. It’s hard to overstate the abundance. And, of course, wherever there are spawning salmon, there are bears and eagles; lots and lots of eagles. Perched on the banks of a creek tearing into a spent bright red salmon. 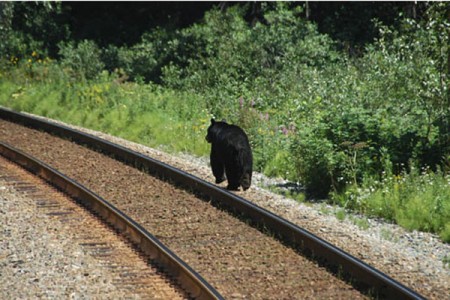 A well-fed black bear ambles along the tracks after a salmon breakfast.

Antoine tells us that there are five different species of salmon spawning in these rivers: chum, coho, chinook, sockeye, and spring. They navigate their way from the Pacific Ocean back to the streams where they were born at different times in the fall, laying their eggs and then dying, their carcasses washing up on the riverbanks where they become an ungodly buffet for the bears and birds.

Sometimes the train will slow as we come aside a particular stretch of river so loaded with spawning salmon that it looks like you could walk on their backs from one side of the stream to the other without getting wet. It’s incredible to see.

And then, of course, there are the stunning views of the snow-draped mountain peaks that appear at every twist and turn in the tracks. As Kaley said this morning as we were all staring in awe from the viewing platform, “They just keep coming, the mountains.”

Drama on the train 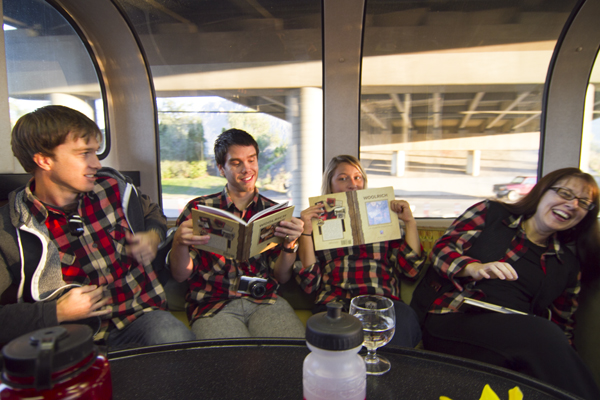 The Red Team boning up on their Woolrich history. Photos by David Lansing.

This morning, just after breakfast as we pulled out of Kamloops where we’d spent the night, Kara leaned over the back of her seat to have a little tête-a-tête with me. Evidently I’d really offended Erika yesterday and Kara thought I needed to apologize to her.

What was my horrible offense? It’s complicated, but let me try to explain. As I mentioned earlier, this whole trip was put together by Woolrich. Two of their pr reps are on the train with us and yesterday one of them, Michael, who is a very nice guy, divided us into two teams, a red team and a blue team. Then we all gathered in a lounge area in the back of our dome car and Michael would ask a question regarding the history of Woolrich (we had all been given little books on the company’s history that we were supposed to have read by now) and the team that came up with the correct answer would get a prize: a DVD of a movie that had something to do with trains like “Von Ryan’s Express” or “The Darjeeling Limited.” 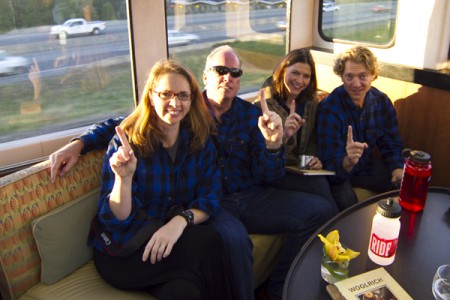 The doomed Blue Team. We may be showing number one, but we were not number one.

Well, our team—the blue team—was really lame. None of us had done the required reading. So the red team was kind of cleaning up. In fact, they’d won so many of the DVDs that Michael decided to just let our team see if any of us could come up with an answer but the deal was that if you answered a question correctly, you could chose to either dig around in Michael’s bag for a new DVD or steal one from someone else who’d already got one. So I got a DVD and then Erika finally answered a question correctly and wanted to steal my movie. But I wouldn’t give it to her. And that’s what set her off.

Big drama, right? You’d be amazed. I think the problem stems from the fact that I am just not a team player. And people notice. For instance, Erika thought that, in an effort to show our unity, we should all sport blue eyeshadow warpaint on our cheeks. So she went around drawing two straight lines on blue team’s cheeks, as if we were all Apaches getting ready to go on a raid. But I wouldn’t let her draw war paint on me.

Well, I was an ass. No war paint. And that just seemed to set things off. And it got worse when I wouldn’t let her steal my movie. So it came to this: Kara having to pull me aside, like a misbehaving schoolboy, and instruct me to go to Erika and apologize. Now.

So I thought about it. It seemed silly to me. But Kara insisted that Erika was really upset. So fine. I found Erika and apologized and we hugged it out. Ending—for now—the big drama on the train.

Oh, and I also gave her the movie. Which she promptly lost somewhere on the train. Oh well.