You are currently browsing the archive for the St.-Tropez category.

Just standing at the front of Le Club 55 and waiting to be seated is a waste of time. Even if you have a reservation. Particularly if you have a reservation. Unless you’re P Diddy or something. What you have to do is thread your way through the enormous bamboo-covered patio to the back, where you’re likely to find a surly waiter or two and emphatically tell them you are here and you are ready to be seated—now. Then there is the question of where to be seated. Is it better to be down on the main patio, closer to the beach, or at one of the slightly elevated tables in the back looking out over the scene? Most likely they’ll just seat you wherever there’s an empty table. That’s what happened to us.

The first thing we did was order the epic crudités pour la table. Not because any of us were really dying to gnaw on raw mushrooms or whole bell peppers but because it looks nice and gives you something to do while you’re looking around at the other diners and trying to figure out what to have for lunch. We also ordered a couple of bottles of rose from the nearby vineyards of Provence. 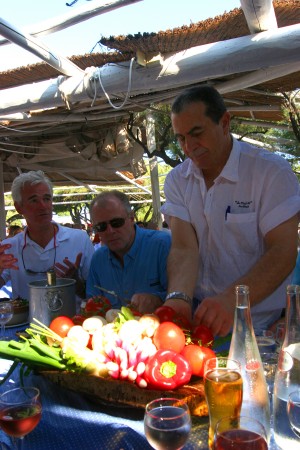 Somehow, Sanc-et-Sanc, which has been here for over 50 years, still works. I mean, you’d think that the most famous café on the Cote d’Azur would be nothing but a tourist trap at this point, but it’s not. The setting is simple and understated (I liked the way the busboys keep cutlery and napkins stored in wicker baskets stashed in the branches of the tamarisk trees)—wooden tables and chairs, like you might find under the trees of a farmhouse in Provence, and a few U-shaped white sofas for larger parties. They throw down a simple pale blue tablecloth, grab some cutlery from the trees, bring out your wine, and then you just kick back and enjoy. The sommelier doesn’t come around and no one wants to tell you about the specials du jour. I would never imagine going to Club 55 for the food, and yet you know what? It’s quite good. And, like the setting, very simple. You start with a cold artichoke with vinaigrette or perhaps the salad nicoise, with salty, succulent anchovies, and then order something from the Mediterranean—grilled sardines, for instance, all smoky and crisp, or sparkling fresh St Pierre, moist and perfectly cooked, served with buttery slices of potato that have been smeared with olive oil and roasted. Nothing exotic. Nothing pretentious. Just good, local ingredients perfectly prepared that are, nonetheless, as beautiful and seductive as the Pucci-wrapped women sitting at the table next to you admiring your fine plate of crudités.

We had a little time to kill since our reservation for lunch at Le Club 55—or “sanc-et-sanc” as Hardy calls it—wasn’t until three so after the tender dropped us off at the southern end of Pampelonne beach, near Cap Camarat, we headed for the nearest beach café and ordered a bottle of Bandol rose. God, the stares we got from people. I couldn’t figure out if it was because we were six guys sitting on a couch together and they thought we were gay or perhaps they were just amused by the way we were dressed. You know, in ugly shorts and bright colored shirts. Obviously we hadn’t gotten the memo that if one is going to have lunch along the Plage de Pampelonne one only wears white, even if it is well past Labor Day. 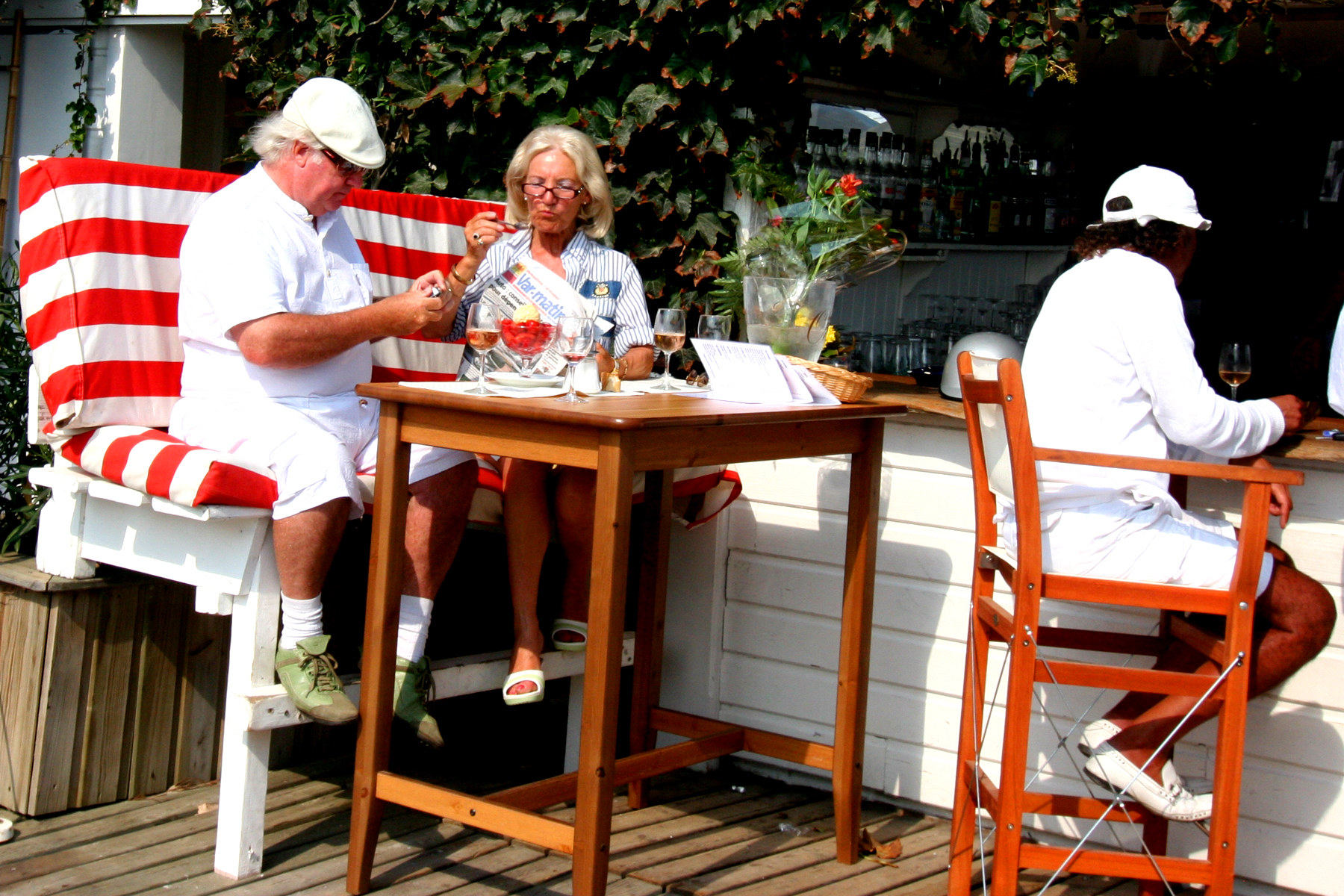 A French couple sitting at the end of the bar pretty much summed up the way everyone else in the place was dressed. The guy, who looked like a retired Humpty-Dumpty, wore a white cap, white polo shirt, white shorts, and white socks. His one nod to color was his pea-green shoes (which perfectly matched the single green stripe on his wife’s sandals). They kept staring at us as they ate their strawberries and ice cream, as if expecting the waiter to come over at any minute and ask us to leave. The disdain on their faces was as obvious as the sunburn on Humpty-Dumpty’s face. Just to sort of get under their skin, St. John, who speaks impeccable French, made a big deal of asking our waitress to take a group photo of us, flapping his wrists around and proclaiming in a very large voice that we were a gay group of friends on holiday. I thought Humpty-Dumpty was going to have a stroke. And fall off his elevated garden bench. When we’d finished our wine, St. John went over and gave Humpty-Dumpty a big smile. “Just love your green shoes,” he said.

The old guy will probably never wear them again. Too bad. They were rather stylish.

To bed or wed

Smaller must have come up with this game: Each of us  was to wander around St.-Tropez looking for the perfect woman to either bed or wed—or both, I suppose. Easy enough. But there was a catch. You also had to invite them back to Unplugged for a cocktail. And then we would vote on who had the best taste.

Nobody was having much luck. I wasn’t even really trying. I spent the afternoon on the back of the boat drinking wine and watching the parade shuffle by along the quay. And then I spotted my bride—a real bride—getting out of a classic gray Jaguar right in front of us. They were taking wedding photos using the mega yachts as a backdrop. I approached the photographer. Would the newlyweds like to take photos aboard one of the yachts? Is this possible? He asked. Of course. No problem. 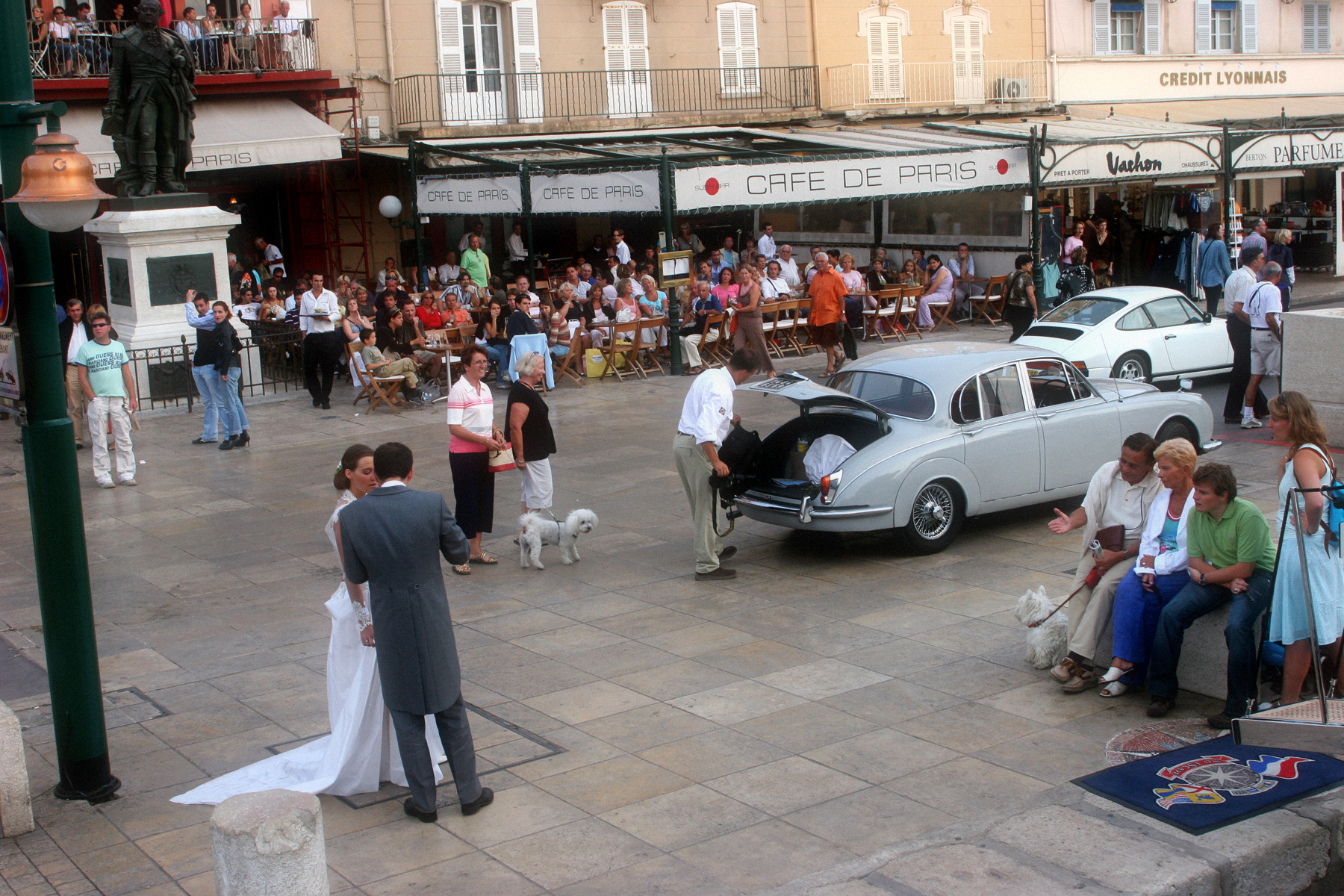 So while the groom was helping the photographer shlep his equipment up the ramp, I offered my arm to the happy bride and brought her aboard.

“Gentlemen,” I said to boys lounging on the back of the boat. “May I introduce you to my choice for the gal I’d like to wed.” 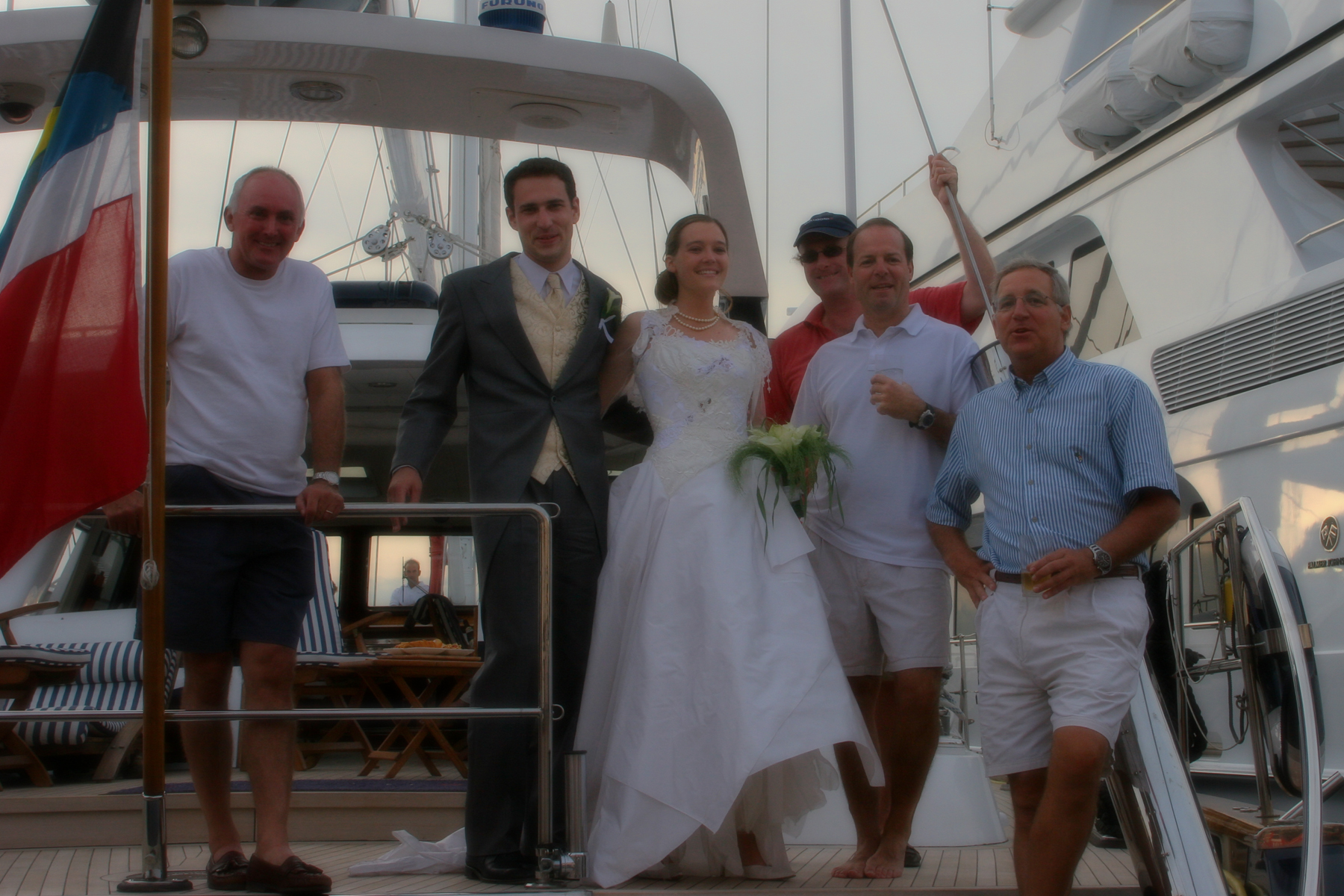 You’ve never seen so many jaws drop. Smaller practically shot champagne through his nose he was so surprised. “You are the master,” he said, bowing in front of me in deference.

While Smaller and I went into Le Café to get the first round of beers, Hardy selected the teams for an initial elimination round of bocce. I think the thought was, Well, Smaller and Lansing are the worst players so lets put them on the same team. Which sort of pissed me off. 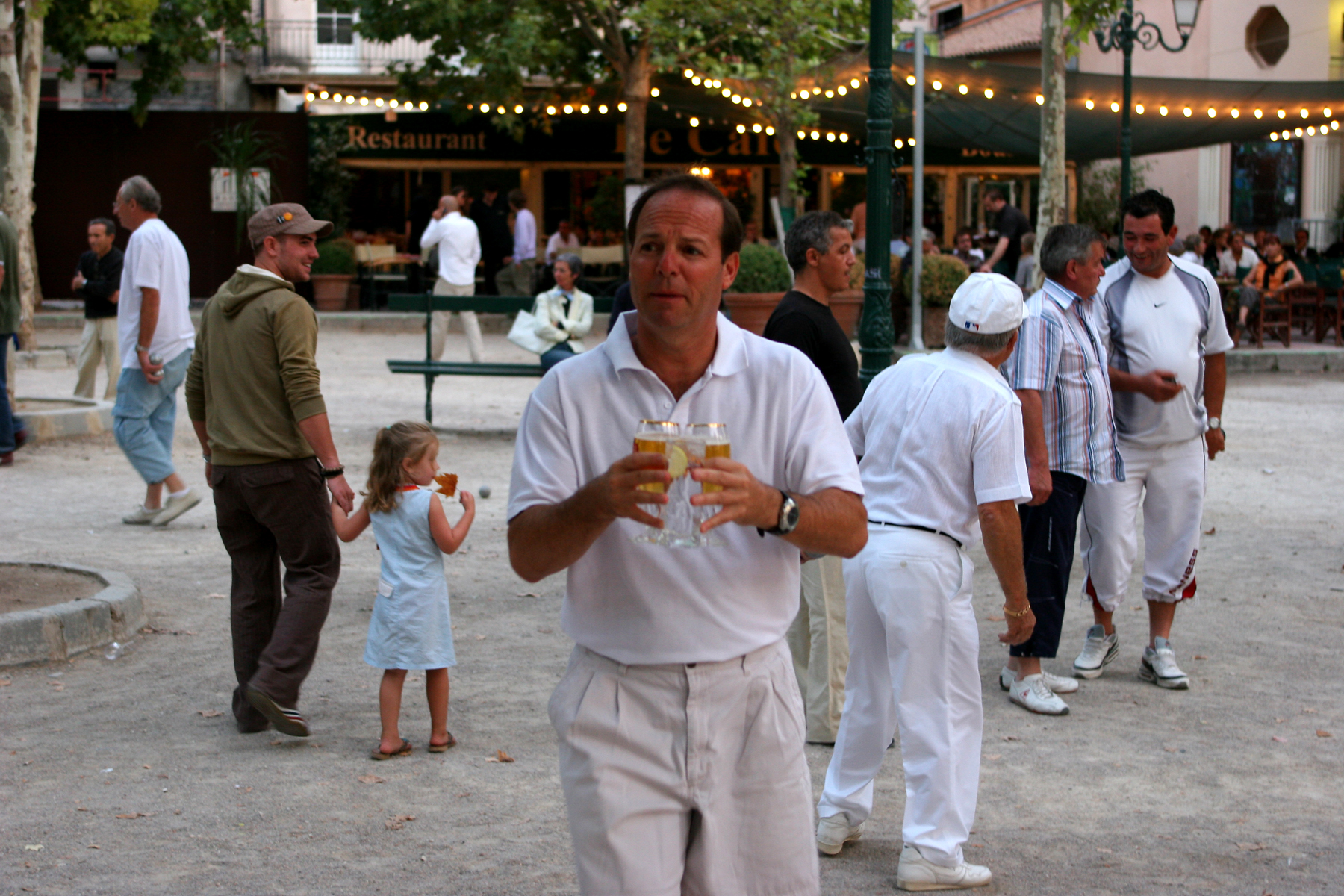 No matter. We destroyed our first opponents 12 to 3. And, really, it wasn’t even that close. We should have shut them out completely.

By the time we were finishing them off, we had a bit of a gallery watching us. Middle-aged couples sitting on the green benches licking their ice creams, a few older men dressed all in white, and a little wolf pack of kids, turned loose in the Place des Lices while their parents finished their meals at one of the nearby cafes.

The French, I think, are either amused or horrified by our style of bocce which includes much chest bumping, disrespectful fingers in faces, and boasts of “You’re going down, sucker.” Plus, we play by our own rules. We toss the damn pallino wherever the hell we feel like it—sometimes ten feet in front of us, sometimes half-a-mile down the dusty court right up against a plane tree. In France, it’s all very formal; the pallino must be tossed in a circle about ten feet in length and if you miss, the other team takes over. 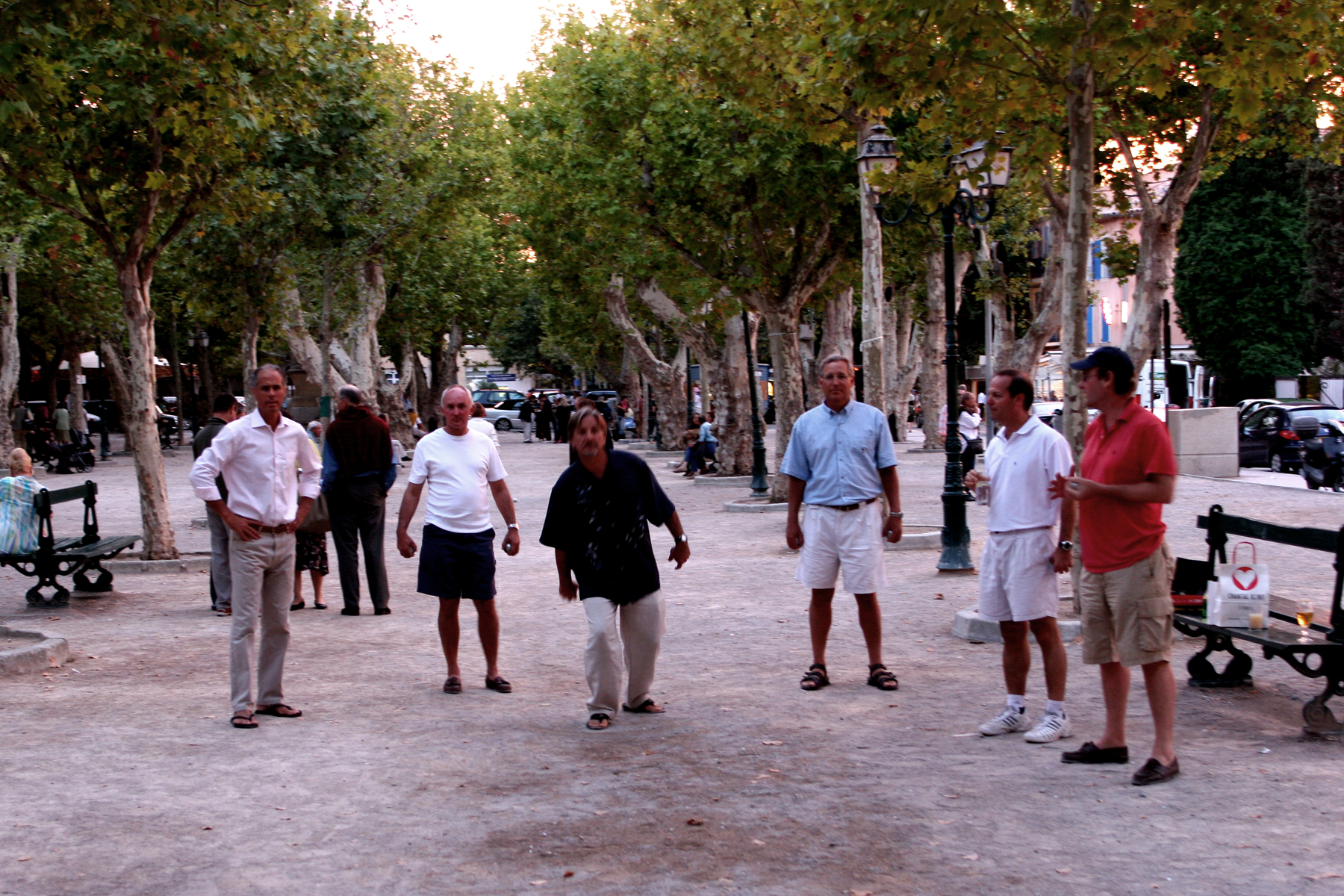 Also, we have our own scoring. The closest ball gets a point and the second closest ball, no matter who chucked it, gets the other point. The French way is that the scoring team receives one point for each of their balls that is closer to the jack than the closest ball of the other team. So you could get two or three points and the other team zippo.

We don’t care. It’s just a game. The enjoyment comes from sipping a beer or a pastis on the dusty Place des Lices, languidly tossing these roughed-up metal balls beneath the plane trees that have silently, stoically watched thousands of men like us play this game. And now we are part of that history as well. And that’s enjoyment enough.

The princess of pout

It’s hard to believe but Brigitte Bardot celebrated her 74th birthday last week. Bri-Bri, as her friends call her, didn’t exactly invent the bikini (it first showed up at a Paris fashion show in 1946) but she certainly popularized it. But I guess her biggest claim to fame (let’s just ignore all the racist stories for the moment, shall we?) is that, along with director Roger Vadim—her first husband—she turned sleepy St.-Tropez into the glam capital of the Riviera. This was back in 1955 when Roger, who’d married the then-18 year old Bardot a few years earlier, came up with some lame-o plot where Bardot is an orphan named Juliette living with a strict foster family (uhmmm, right) as an excuse to film the woman Time magazine called “the princess of pout” in her booby-popping gingham bikini. 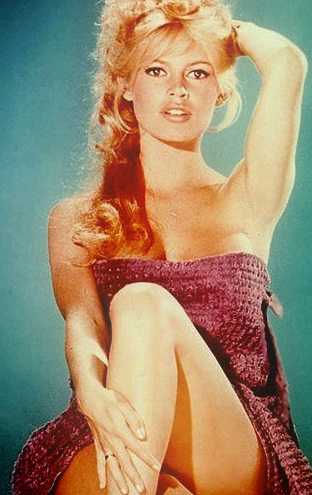 I can’t say I was ever a Brigitte Bardot acolyte. She’d already retired from the film world by the time I started paying attention to women. But you have to admit that, like Marilyn, she had a little something that went beyond her sex kitten routine. As Jane Fonda (who was also married to Vadim) has said, in some ways Bardot was an early feminist. She lived like a man, taking lovers whenever she wanted, moving on whenever she felt like it. As one writer said, Bardot was James Dean in a bikini. I’m not sure I know exactly what he meant by that, but I kind of like it.

There are still a couple of Bardot landmarks in town worth a visit. The first is Le Café on Place des Lices, the main square in the old town that is shaded by 100-year-old plane trees and crowded with open-air cafes facing the dusty square where the local ball-chuckers still play pétanque just as they did 50-some years ago when Bri-Bri was getting a bit tight on champagne and stuffing cake into Vadim’s face at the ancient café. The boys and I will go there this evening and we will stand at the bar next to the old men getting drunk on pastis and toast Miss Bardot. And then we will  play a game or two of bocce in her honor.

And then tomorrow afternoon, we’ll take the tender to the beach at Pampelonne where Roger spent so much time filming BB in her gingham bikini and where, that same year, a little beach café was established—Club 55—to serve lunch and refreshments to Vadim’s cast and crew. And there we’ll have our own lunch. And watch the glamorous French women cavorting about (god spare us the Germans and their hairy bare asses).

We’ll keep an eye out for BB but I doubt she’ll show up. I think she finds St.-Tropez passé these days. (Did you ever hear the story about John Lennon and Brigitte Bardot? Supposedly he had quite a crush on her and urged a pr flak to arrange a meeting in 1968. But he was so nervous about it that he took LSD beforehand. And the meeting did not go well. As he wrote in his memoir, “I was on acid, and she was on her way out.”)

Roger Vadim went on to bed or wed dozens of gorgeous women after Bardot (although I dare say he found it hard to top the 18-year-old Brigitte), but in a way, he never left St.-Tropez. He died here in 2000 and is buried in the old cemetery.