You are currently browsing the archive for the Rome category.

Wilma the couchsurfer from Chile 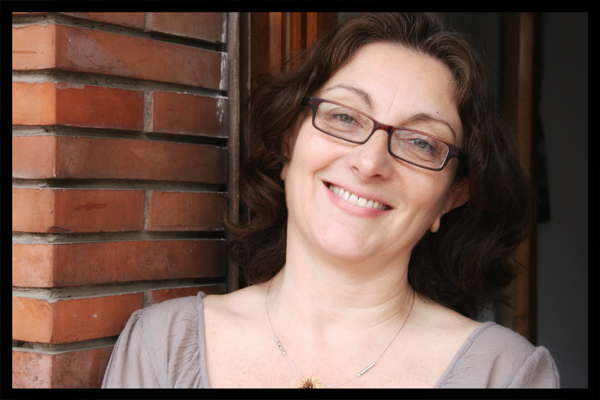 The latter half of my stay in Rome is much more relaxed than the first half. I have found possibly Rome’s most trusting, most big-hearted person on Couchsurfing, and he has told me I can stay in his apartment even though he is not there. Another couchsurfer is there already, he tells me. Wilma, from Chile.

I’m not sure what time Wilma will leave the apartment, so I take the metro early. I take the elevator to the seventh floor, and ring the bell. Wilma knows I am coming, but she hasn’t read my message about what time, so she greets me with a dustcloth in hand. She asks if I speak Italian or Spanish. I say no. She says she doesn’t speak English, but she says it in English, so I say, I can help teach you if you want.

Wilma had been cleaning the apartment, but she takes a break to make us some tea and get acquainted. She is 50 years old, and has a daughter my age. She’s spent the last year in Italy traveling around after selling everything she owned in Chile and returning here, because her grandparents were Italian, and they regretted never coming back. So now, she is “closing the circle.”

After tea, she is tired from trying so hard to speak English, so we clean the apartment together. I sweep, she mops. This is what I do when I couchsurf, she says. I put the place in order. “I was…” she hesitates, and says a few words in Spanish and Italian, until I decide that “disorganized” is the one she wants. And then she needs “before.” But now, Couchsurfing has forced her to be organized.

I nod. I understand. 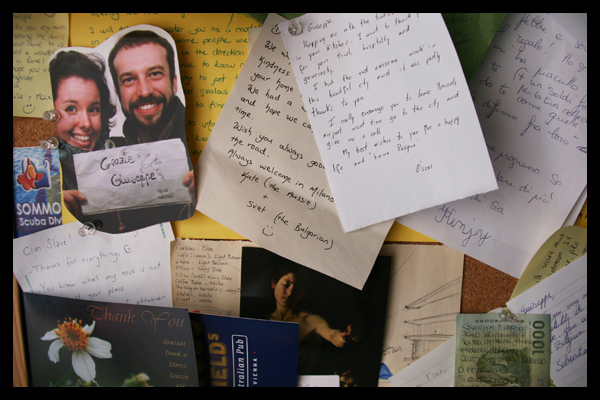 A Couchsurfing thank you board. Photo by Katie Botkin.

In Rome, I’m staying with someone I’d never met until I got to his house, this fellow called Massimo who really likes motorbikes. It is pouring rain outside the night I get there, and late though I my arrival is, and tired though he is, he make me beef heart with mozzerella for dinner to welcome me.

We’d connected through Couchsurfing, a website and, for some, an entire way of life. It’s like karma, or Christianity, or anarchy, or socialism. I think different people have slightly different motivations for doing it. Some are just looking for a free place to stay. Others are intrigued by what amounts to a mini cultural exchange. Ideally, you don’t just stay at other people’s houses, you host them as well. Not necessarily the same ones. You can say no or yes to any request you feel like, and you make your judgment largely based on the person’s online profile — including feedback other people have left after staying or hosting. You can check out the feedback if you want; I’ve had girls contact me about references I’ve left for other people.

The three nights I stayed with Massimo, I came and went as I pleased, because he’d given me a spare key. Every evening, we talked and then I went to sleep on his couch. The last night, I make a joke about how Couchsurfing is basically like everything your mother told you never to do. Massimo laughs. “Yes,” he agrees “A stranger is on your doorstep and you say to him, come in.”

Not everyone is so polite, of course, and I think it takes a certain mindset to be able to Couchsurf gracefully, not to mention wisely. A certain mindset and a certain hardness of hip, because the place you end up sleeping may not always be at the level of a four-star hotel. 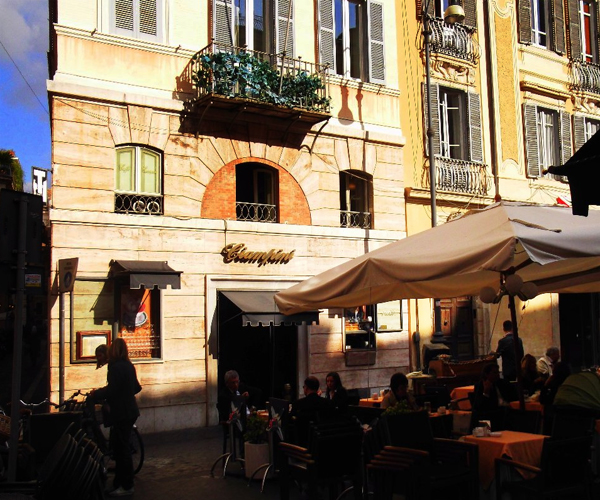 To celebrate Emma and Thomas’ papal blessing, Emma has made reservations at Ciampini Ristorante, their favorite restaurant in Rome. We meet at the top of the Spanish steps and walk over, with the smell of jasmine hanging in the air, and seat ourselves at our table on the terrace overlooking Rome at sunset. Emma tells me that she loves this restaurant because the food is outstanding and the service is excellent. Indeed, our waiter seems to appear exactly when we need him to, and is helpful without being condescending or overly jovial. He brings us some amuse-bouches with caviar. Mary orders a negroni and says it’s made perfectly. I order prosecco, agree to a portion of the seafood platter, risotto with seabass and spaghetti as my next courses, and then want beef with a side dish of Roman artichokes.

After the seafood platter, a spread of prawns, ahi tuna and octopus salad, I realize I’m going to have to start taking it easy. I’m not sure how Italians make through an entire meal like this. I have a few bites of the pastas and sit back to converse for awhile to let my stomach rest. Emma makes me try some of her wine, a valpolicella she’s swooning over due to its aromas of leather and oak.

When the main course comes, I concentrate on enjoying the beef without making myself sick. “Next time we come here, I am definitely only ordering the main course,” says Thomas. I groan and agree. It’s just too good to waste, though. I ask the waiter if they do doggie bags in Italy. “But of course,” he says, and disappears with my plate. He comes back with a nice little package for me to take away, and I excuse myself before anyone can guilt me into trying desert.

Rome: Fired over a negroni 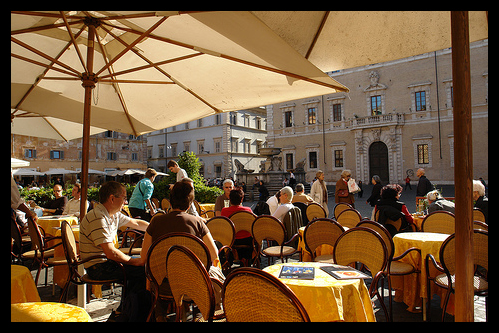 After the papal blessing, I spot Mary, who has been standing not far away in the crowd of the faithful and the curious, and we decide to go get something to drink in the shade. There’s a nice-looking place in a nice-looking alley not too far from the Vatican, where the cocktails are nine euros, and Mary orders a negroni.

The waitress, however, brings her a Corona. Mary shakes her head. “I’m sorry,” she says. “I’d love to drink that, but I just don’t drink beer at all. I ordered a negroni.”

The waitress attempts to argue with her, but Mary insists, politely, so the waitress goes off. She comes back, enunciates a sentence I don’t understand, with “responsible,” and “story,” in it, and takes away the untouched Corona. Five minutes later, she comes out with her purse, and walks away, disappearing down the street. Mary stares after her.

“Did I just get her fired?” she asks. “Was I unreasonable?”

We wait awhile longer for Mary’s drink, but it never arrives. Mary asks another waitress if it’s coming. The waitress doesn’t know anything about it, but says she can get it. “Never mind,” says Mary, “I don’t want it now.”

So we go and get some gelato instead.

In search of a papal blessing

Another letter from Katie Botkin, this time from Rome. (This may be my favorite letter yet.) 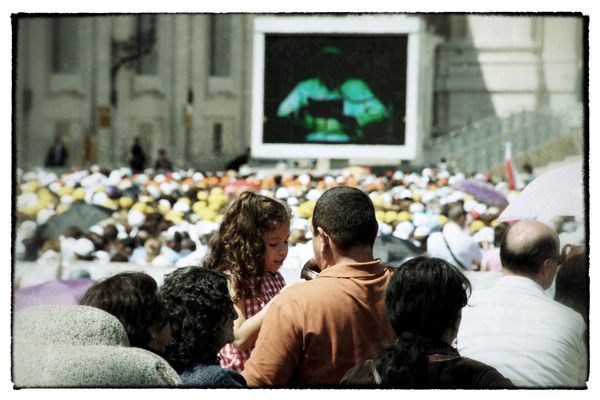 Waiting in the hot sun for the papal blessing. Photo by Katie Botkin.

There’s a whole passel of people, Catholic and non, going to Rome with Emma and Thomas to see them get the papal blessing on their newly-minted marriage. I have the same flight from Cork they do, as does Mary, so we all share a cab to the airport. Emma manages to convince Aer Lingus to give them an extra seat for her wedding dress.
Emma and Thomas have been planning this for months. They had to apply, get tickets, and the day of, they have to get up at five in the morning, put on their wedding garb, wait in line for front-row seats, run to claim them, and sit in the sun for about six hours, only one of which is taken up with the papal address. They had been planning to get sandwiches to take with them, but room service is not available at five in the morning in Italy. So the day of the blessing, they sit, in the front row, hungry, and getting more sunburned by the minute, as the Pope gives a short address, which is then translated into French, English, Spanish, Portuguese and Polish. Then it is time for him to bless sacred objects and Catholic people, and Emma and Thomas wait for him to come and pray over them in their native language, as they have heard he has done in the past. But apparently he gives the ticket-buying crowd a quick wave over his shoulder and that’s it. He does some other blessings and gets on his Popemobile and goes to wave at the larger crowd below. Emma is so upset she bursts into tears.
Emma and Thomas go back to their hotel room and argue over whether, after this disappointment, they should now become atheists (Thomas’ preference) or Buddhists (Emma’s preference), but they calm down and take a nap instead. After their siesta, they are still good Catholics.