You are currently browsing the archive for the Sayulita category.

Eating the goat in Sayulita Me with Jesus on a Sunday afternoon in Sayulita. Jesus blessed me with his raw oysters. Photo by David Lansing.

Here’s my philosophy on travel: Wherever you are, you have to eat the goat. That means that if you are traveling on a train in India and your seatmate offers you fried grasshoppers from a plastic bag, you eat the grasshoppers. I’ve had raw wallaby in Tasmania, illegally made home-brewed beer in Nigeria, and brain tacos in Mexico. The one thing I’ve resisted down here are the raw oysters. For one thing, I can see the guy diving for oysters in the Bay of Banderas not a hundred yards from where I know a sewer line empties into the ocean. For another, they take the oysters, dump them on a wooden table set up in the road, and sell them (sans ice) all day long in 90 degree weather.

Yesterday I spent the day on the beach in Sayulita, about 15 minutes north of where I live in Bucerias. Sunday is family day and there were throngs of large, happy families playing in the surf, drinking tins of Tecate, and ordering piles of raw oysters from a well-dressed man in a straw cowboy hat who was running back and forth between where all the pangas are pulled up on the beach and the beach-goers spread out on their chairs in front of Don Pedro’s.

Not far from me was a red-headed woman from Vancouver whose boyfriend ran one of the “rent-a-surfboard” stands on the beach. We started chatting and when next the oyster man passed by I made some stupid remark about how I’d eat raw dog meat before I’d eat one of those oysters. “Oh, they’re delicious,” she protested. “You should try one.”

Deciding to call her bluff, I told her I’d order a dozen if she’d eat half of them. She countered: She would eat four, I would eat four, and the other four would go to her surfing boyfriend who was sitting in the shade of Don Pedro’s renting surfboards to little kids. I told her she had a deal. So the next time Jesus came by–that was the oyster man’s name, Jesus–the next time Jesus came by, I’d buy a dozen oysters. Which I did.

“Tell me truthfully, Jesus, are these good oysters?”

Why would Jesus lie?

Jesus offered us his plastic bottle of salsa picante and I squeezed a few drops on each oyster, squeezed a little lime over them, and then sucked one down the hatch. It was warm–but delicious.

I have to admit that when I went to bed last night, I wondered if I’d be getting up in the middle of the night screaming the name of Jesus in vain. But so far, so good. And now I can say I truly ate the goat in Sayulita. 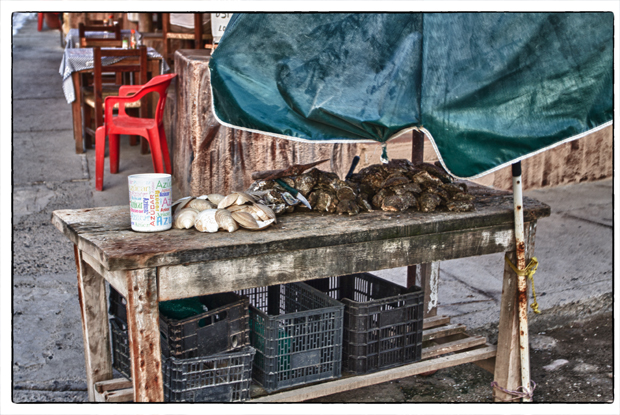 I should try them. I really should. I’m talking about the gigantic oysters, the size of baseball mitts, sold on the streets of Bucerias and Sayulita. They’re plopped on to a slimy table shaded by a rusty umbrella, along with clams as big as starfish.

I know where they come from. I watch the divers every morning from my balcony as they harvest the shellfish right in front of my house. They’ll dive down to the muck of the Bay of Banderas for two or three minutes and come up with a rough, dark oyster, and toss it into the basket suspended in the middle of their rubber inner tubes. Eventually they’ll collect enough to swim in to shore and walk up the beach and sell their harvest to one of the little restaurants close to the beach and that’s where you’ll find those oysters. Fresh, warm, gigantic from the rich effluence that comes from the drain pipes into the bay.

I should try them. I don’t know why I don’t. Maybe it’s because it’s 85 degrees out. And the oysters sit in the hot sun. Without ice. Still, I’m sure they’re fine. Afterall, I see people buying them all the time. And standing right there in the street eating them. And they don’t drop dead. I don’t think. At least, I see them continue to walk down the street. For a little while.

I should try them. Maybe next time. 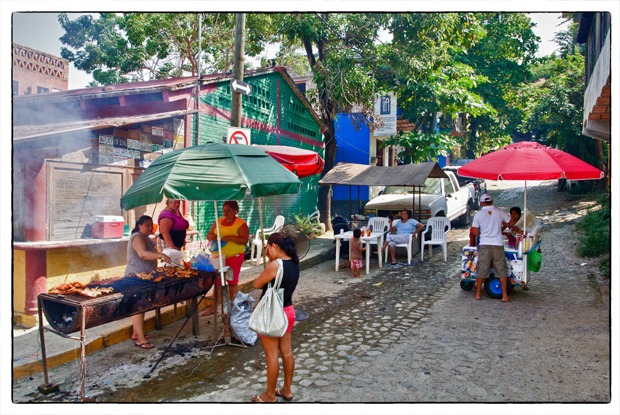 The chicken taco lady in Sayulita. Photo by David Lansing.

Another one of my favorite places for street food is this little stand on the back side of the plaza where a short, squat little woman grills up chicken all day long. You can smell her bbq going from a block away. It’s the simplest of affairs. She’s rigged up a split 50-gallon metal barrel as a barbecue and has set up a couple of plastic chairs and tables right in the middle of the cobblestone street and that’s her restaurant.

For five or six bucks you can get a whole chicken grilled over a wood fire or, for about $1.50, get a couple of chicken tacos made on homemade corn tortillas. Order up a Fanta, find a spot in the shade, and enjoy the finest, most inexpensive lunch you’ll have in Sayulita.

The Mexico Diaries: The Kim Kardashian of Mexico 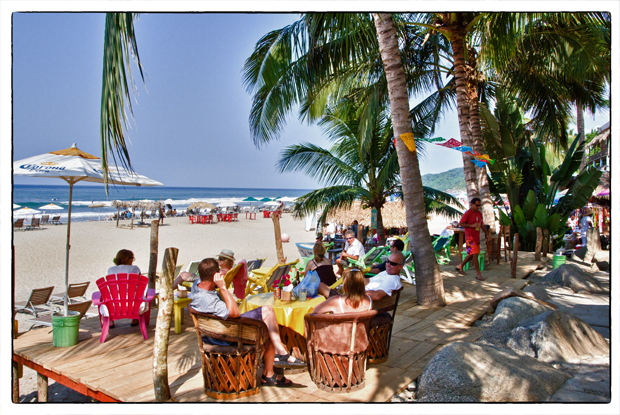 Murray is from Canada. I met him four or five years ago when he and his wife invited me to dinner at their house in the hills above Sayulita. It was a very unique house, round, with almost no straight walls. And almost completely open to the elements. At the time I had dinner there, Murray, who made a fortune selling key-chains or something similar in Canada, went on and on about how much they loved Sayulita. So beautiful, so charming, so hip.

Murray still has his house in Sayulita but now he lives where I do near Bucerias. He mostly just rents out his Sayulita house. I asked him why that was and he thought for a minute and said, “I’m over Sayulita.”

I guess it was like a Kim Kardashian marriage: It just couldn’t last.

I sort of see his point. The first time you come to Sayulita you’re just enchanted. There are all these jewelry stores and art galleries and even though most of the stuff is really, really bad, it’s still kind of enchanting. You talk to the owners of these galleries who have moved here from New York or Santa Barbara or Vancouver and they tell you about the woman near the plaza who not only gives great massages for $35 but also teaches salsa lessons or the group of beautiful sisters, gypsies, who sell Tahitian black pearl necklaces near the beach, and you think, wow, this place is special.

And it is. The way Woodstock was special and Mill Valley was special and everyone wanted to go there. And they did. Until they realized that it wasn’t as special when you lived there year round. It was more like a weekend thing. And that’s the way Sayulita has become for me. I like it. They way I like Katy Perry: In very small doses and only when I’m in the right mood. 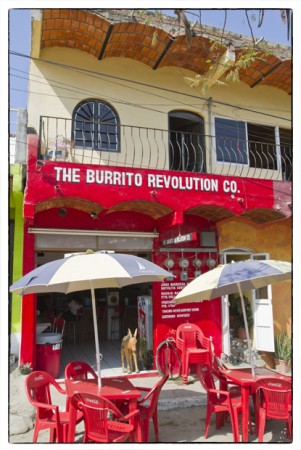 The new location for Burrito Revolution in Sayulita. Photo by David Lansing.

I thought it best if I got out of town over the weekend. I had no electricity, no air-conditioning, and a problem with leaks under my sink which necessitated turning off the water. Plus I was becoming very fond of my bottle of Don Julio silver. So I went to Sayulita.

Going to Sayulita once a year, as I have done for the last five years or so, is like going to your high school reunion: Nothing is recognizable on your return. The produce stand on the corner of the highway was gone, replaced by a new Pemex, and there was a new bridge (the old one was washed away last year). Plus the cock-fighting arena seems to have disappeared. Before I ever had a chance to see a cock-fight.

I parked at my usual spot near the plaza only to discover that my favorite lunch spot, Burrito Revolution, was gone. And the next door paleta stand seemed to have new owners. The beach itself, however, looked much better than it did last year when the storms had carried off most of its sandy beach and a river ran parallel to the water making it difficult to figure out where to set up your beach chair and umbrella. Now the sand is back and the river along the beach is gone.

Also missing this year was the tamale lady. She used to roam the beach carrying a bucket of tamales that she sold for a dollar each and they were the best damn tamales I’ve ever had anywhere. I will miss her.

I sat on the beach for several hours and then around one decided to walk in to town and find a place for lunch. I was still thinking about the fabulous shrimp burritos from Burrito Revolution. The thing is, that place was so popular that even at ten in the morning there was a line of people waiting to order. So it didn’t make sense to me that they would have just pulled up stakes and disappeared. Thinking about it, I convinced myself that they must still be in Sayulita somewhere. I just had to find them. So I started walking up one street and then another until finally, on the backside of the plaza not far from the church, I found them. I ordered my regular, a shrimp burrito and a Pacifico. But even though it was around one on a Saturday afternoon, I was the only one in there. Which seemed really odd.

“Where is everybody?” I asked the young woman working the front counter who I recognized from previous visits. She shrugged. It is still early, she said. My food came (it was just as good as I remembered) and I sat at my table enjoying myself and taking time drinking my beer. Still, after about an hour, only one other person had come in to order. Perhaps, like me, people are still confused as to their new location. Or maybe we are just such creatures of habit that when they moved, they also lost their customer base. It’s hard to say. But I’m glad they haven’t gone the way of the tamale lady.