Well, someone on the boat made a big stink about passing by the Lagavulin distillery without so much as a wee taste (who knows, maybe it was me), so a decision was made to hire a car and go for an afternoon visit.

Our driver, Martin, drove remarkably restrained (compared to my Glaswegian driver) down a one-lane country road through fields of peat across to the other side of Islay. Because the road was so narrow, every time a car approached from the other direction, one of us would have to pull over.

There was a certain island etiquette to the whole thing. First Martin would pull over and then, as the other car approached, he’d give him a particular type of wave. If Martin felt he knew the driver, he’d raise a single index finger off the steering wheel. If he thought he knew the driver but couldn’t be certain, he’d lift four fingers off the steering wheel. And if he didn’t know the driver from Adam, he’d raise his hand, palm up, like a Cherokee in an old John Wayne movie.

Now you might think that a business like Lagavulin, which has officially been distilling whisky since 1816 (they were brewing up the illicit stuff as early as 1742) would be quite modern and evolved. But you’d be wrong. In fact, if you were to make a Scottish version of “It’s a Wonderful Life,” you couldn’t do better for a setting than the offices of the Lagavulin distillery with its creaky, well-worn wooden floors and tongue-and-groove ceiling and ancient leathery wing chairs. As we waited for the distillery manager, Donald Renwick, to come in and give us a tour, I kept expecting Jimmy Stewart to walk in the door carrying Zuzu on his back. 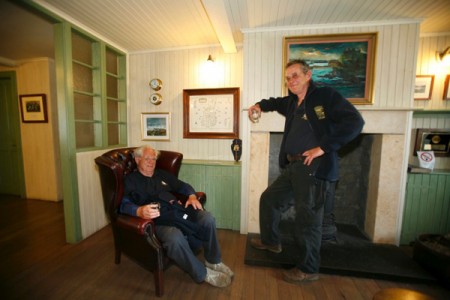 We sat in the old wing chairs and nosed various Lagavulin iterations, all of them showing that typical smoky-sweet Islay character, but my favorite whisky was actually a blend Donald had hidden away called Celtic Pillaged. The “pillaged” malt was liberated from 40 litres of cask strength 12-year-old whisky from nine distilleries on Islay and Jura (as well as Bushmills in Northern Ireland). Then the whisky was vatted together and married at Lagavulin. I got only the slightest sip of the whisky (the sale of which goes to support children’s hospitals in Scotland and Northern Ireland), but I can tell you it was truly the nectar of the gods. 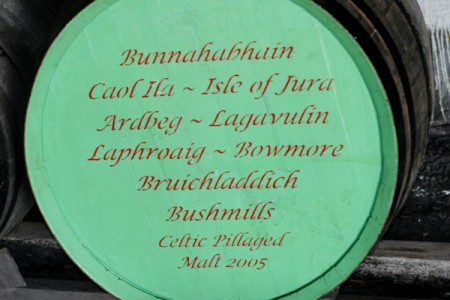 A cask of Celtic Pillaged. Photo by David Lansing.