My friends the Fletchers have invited me to spend the long weekend at their home, Casa Corona del Mar, in Custodio along what’s called the Nayarit Riviera. This necessitates a two day drive with a stop in Guadalajara (okay, I could do the whole thing in one long 10 or 11 hour drive but that’s not going to happen). Whenever I’m in Guadalajara, I stay at the Villa Ganz, a stylish boutique hotel in an elegant old residential neighborhood full of coffeehouses and bookstores.

There are a lot of reasons to love the Villa Ganz, not the least of which is Cecilia Blanquel, the manager. Whenever I mention an interest in anything having to do with the city, from where to find a rare tequila to the best place to purchase an olla pot for making Mexican coffee, Cecilia has the answer. So when I casually wondered aloud shortly after arriving where I might find chiles en nogada, it didn’t surprise me that Cecilia had a ready reply: El Sacromonte. Then she told me how to get there. Aye-yi-yi.

When I expressed just a hint of skepticism about ever finding the restaurant, despite her elaborate if confusing directions, she waved away my doubts. “It is worth the effort,” she assured me. “You will not be disappointed. Truly.”

So off I went, up one street and down another, strolling in the warm fall night along sidewalks covered in fallen jacaranda blossoms, making a left just past the old woman selling dried shrimp, as Cecilia had directed, and right on the corner with the street vendor selling churros, in search of a small restaurant in the former home of a famous Tapatíos bull fighter. What could be simpler?

When I’m in Mexico, I love going to the little roadside birria joints throughout the central plateau of Mexico and slurping up every last morsel of slow-baked lamb in a spicy chile broth or hitting the mercado in search of the banana-leaf-wrapped pork tamales that are a specialty of Mérida. But the holy grail of Mexican cuisine for me is chiles en nogada. 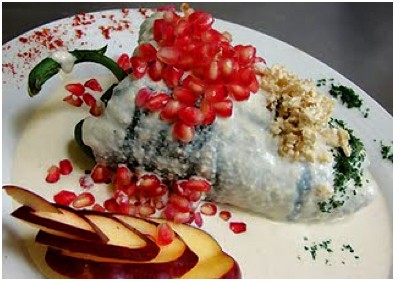 The colors of the Mexican flag are replicated in chiles en nogada.

Chiles en nogada (chiles in walnut sauce) has a long and glorious history in Mexico. Legend has it that, around 1820, nuns from a convent in Puebla, in Mexico’s heartland, first prepared the dish at a banquet in honor of Mexico’s revolutionary leader, Agustín Iturbide, as he passed through the city after having signed the treaty with Spain that gave Mexico its independence. The story says that all of the dishes displayed the colors of Mexico’s national flag but the most memorable was the nuns’ creation combining the green of poblano peppers with the white of the walnut sauce and the red of the pomegranate seeds sprinkled over it.

True or not, it makes a fine story. But I think the legend of the dish owes more to its scarcity (traditionally its only served between mid-August and Christmas, when both fresh walnuts and pomegranates are in season) and the elusiveness of finding one that is well made. Seen on a plate, chiles en nogada looks deceptively simple: There’s the ubiquitous Mexican chile (a mild poblano in this case, roasted and stuffed) bathed in a bone-white walnut sauce and adorned with jewel-like pomegranate seeds. What’s the big fuss? But like a chocolate soufflé, the art is in the preparation.

First there is the filing or picadillo. It should be made from braised pork—not beef—and candied barrel cactus and the shaggy Mexican cinnamon called canela. To make the sauce you must buy fresh walnuts, like those sold in the fall by the old women along the streets bordering the markets in Puebla, and they should soak, overnight, in milk, and then be peeled (which is a horrible, almost impossible task) both to make the sauce as white as possible and to keep it from turning bitter. Most important is the balance of the ingredients: the filing must be savory but also sweet, the sauce delectable but not cloying. In short, each ingredient must complement but not overwhelm the other.

Yes, and despite my lust for the dish, I am just about to give up on my expedition when I suddenly spot several well-dressed locals piling out of a car and disappearing behind the lush foliage of several jacaranda trees. “I’ll bet it’s over there,” I say to myself. And I am right. Minutes later I’m ushered to a linen-covered table in the rear of the open-air dining room, next to the trunk of one of the old trees whose purple-blue flowers disguised the entrance. I quickly dispense with the menu and order the house specialty, here called Los Chiles de Septiembre, in honor of Mexico’s Independence Day, September 16.

As Cecilia predicted, I am not disappointed. The picadillo is meaty with overtones of candied fruit, the sauce sweetly nutty, and the artistic presentation of the red pomegranate seeds on the canvas of white sauce as beautiful as a Frida Kahlo painting.

On the walk back to the hotel, I think about each ingredient, how the sweet and the pungent are a perfect marriage that could never have been predicted, and wonder if anyone else in the city makes a dish so fine. The next morning I thank Cecilia profusely for her recommendation, telling her I can’t imagine having a finer dish while in Guadalajara.

“This is no doubt true,” she says, “although I do know a little place that makes the most amazing birria you can imagine.”

I contemplate this information.

And then she explains how to find it. But that is another story.