Chocolate and a beautiful woman

“It’s difficult to explain about chocolate,” says a beautiful woman standing next to me at the Sandri Pasticceria bar in Perugia. She is drinking an espresso and nibbling on little chocolate treats from a white plate. I have asked her why women are so crazy about chocolate. “It’s so…personal,” she says, putting a hand to her chest. 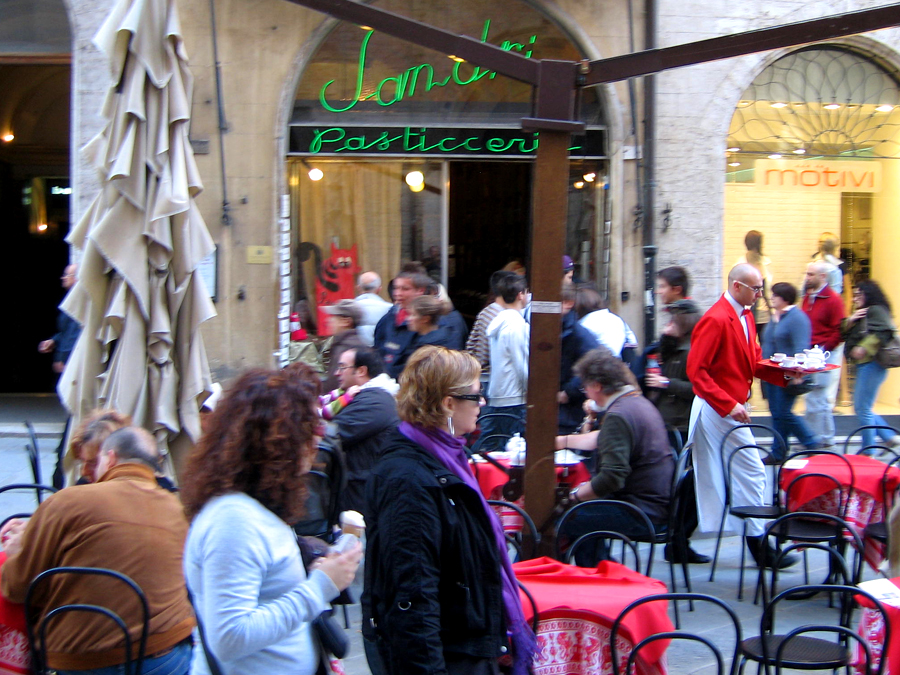 The pasticceri, Piero, nods in agreement and then leans forward as if to reveal a secret. “You see this woman?” he says, nodding clandestinely towards a 20-something girl in a short denim skirt and fluffy chartreuse sweater down at the far end of the bar. “She asked me to make a large chocolate egg with a pair of boxers inside made out of a special material that melts when it warms up. It was for her boyfriend. She was crazy with love.”

“And?” says the woman standing next to me, wanting the rest of the story.

Piero shrugs. “He did not feel the same.”

The tall, beautiful woman clicks her tongue. She takes a bite of chocolate and makes a sensuous little noise deep in her throat. Then she slides the white plate towards me and tells me to try the dark chocolate with chili. “But eat it slowly,” she instructs. “Like you are giving a woman a kiss. That way it opens up to you. You do not want to rush these things.”

I take the smallest of bites and allow it to sit on my tongue, warming.

The pasticceri, Piero, comes back down to our end of the bar. “There was another time when I made chocolate in the shape of a Fiat,” he tells us while rinsing glasses. “A young man wanted to give it to his girlfriend to celebrate the first anniversary of when they had sex in his car.”

“Molto romantico,” says the beautiful woman, sighing. She takes the last piece of dark chocolate from the plate and looks at it. “My doctor says I shouldn’t eat it, but I don’t care,” she says. “I crave it. All the time.” The chocolate goes in her mouth. She stares at her empty espresso cup. We have come to that point in our conversation where it is expected that one of us will say something like, “Well, I guess I should be going.” But neither of us speaks. Finally, I make a motion towards the pasticceri.

“Piero,” I say, “Give us another little plate of dark chocolate. And two more espressos.”