Coming across a shrimp boat 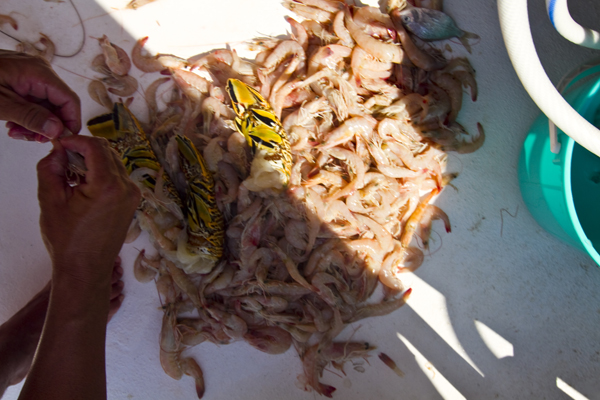 Our guides peel shrimp on the Avalon's stern. Photos by David Lansing.

I was down in my stateroom, lying on my bunk, alternately dosing and reading, when I felt the Avalon slow, shutter, and then come to a dead stop in the water.  Since I knew we were in the middle of the open ocean, still a couple hours away from the port of Jucaro, I assumed the worst: That the boat was having engine problems. I quickly scrambled topside to see what the problem was.

A couple of the guides, as well as Leissan and Jorge, were scrambling around the sides of the boat. I went out on the bow. Headed straight for us was a rusty old fishing trawler with black nets flapping from extended booms making it look like a sad old pelican bobbing in the water. My first thought was that the trawler was in some sort of trouble and we’d stopped to help out. But Suliet told me that it was a shrimp boat and our captain had made a deal over the radio to trade for some of their shrimp. 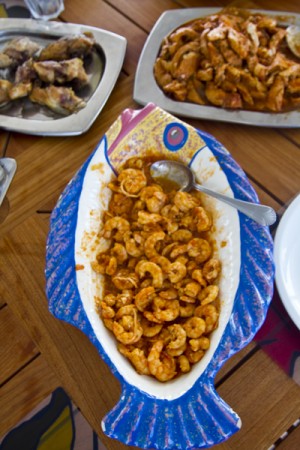 An hour later, the shrimp were on the table.

So the shrimping boat swung around to our stern and Eric, the captain of Avalon, slowly backed the boat up close enough that we could make the exchange: a bushel of fresh shrimp for four dozen eggs and a bottle of rum.

Once the exchange was made, the guides dumped the bushel of shrimp on the stern and, with the Avalon once again headed for Jucaro, peeled what looked like about 150 or so shrimp. An hour later, Eduardo had cooked them in a spicy red sauce and Suliet was serving them for lunch. What a perfect way to end the trip.