I didn’t really have anything to do today so I decided to drive around the island. Again. I think I’ve already gone around the island 9 or 10 times, but what the hell. The thing is, even though the road around the island is only 30 miles long, you always see something new. Like last time I came across these bee hives in the jungle. And when I got out to check them out, the bees, which were the size of hummingbirds, chased me back to my car. Jungle bees on steroids.

This afternoon I came across two things I hadn’t seen before. The first was a cow that was tethered to a rope that was strung out across the road. I’m not even sure you could call this beast a cow. I don’t know what it was. Except that it had horns and was cross-eyed and did not seem happy to see me. Here it was, in the middle of nowhere, tied up in the jungle, with absolutely no interest in letting me by. So I stopped the car in the road, got out, and made some ridiculous noises to get it to move. Which it eventually did. After giving me the cross-eyed stink eye. 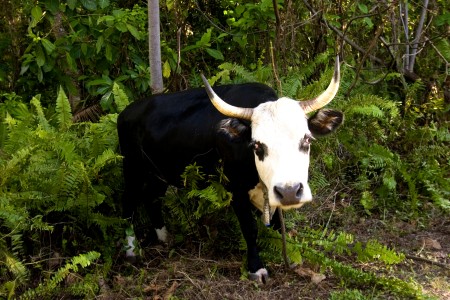 Then, a few minutes later, I came across this boulder beneath some coconut trees in the jungle. As first it caught my attention because of its weird blue color. Then I realized that someone had actually carved a relief on the boulder. If you squint and look carefully, you’ll see that the figure on the rock is a Polynesian superwoman (it has small boobies). Sort of leaning back and staring defiantly at the sky. As if she’s going to take off into the wild blue yonder any minute now. But the black lichen growing on her suggests she’s been thinking about this for some time now. And flying ain’t gonna happen anytime soon. 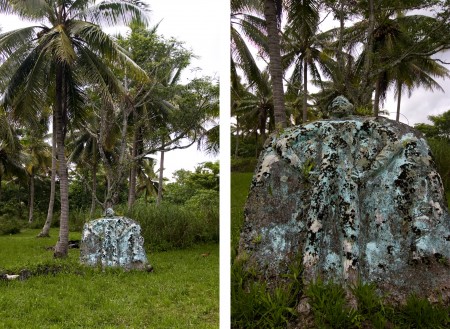 So that was my day. After all that excitement, you can understand why I was anxious to get back to the Matavai in time for cocktail hour. And to sit on the deck with the handful of other guests and watch the sun fall into the ocean.