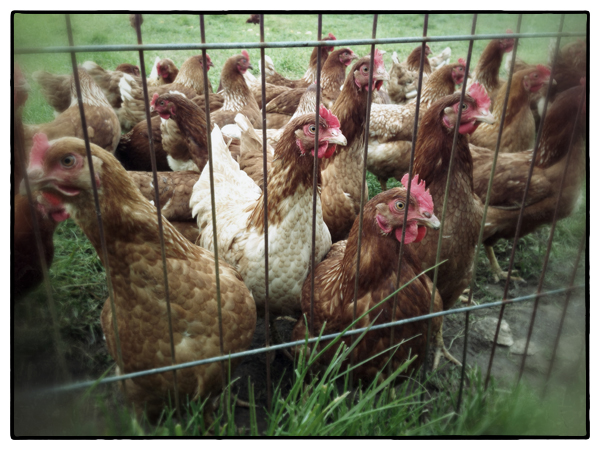 The Irish chicks at Ballymaloe. Photo by David Lansing.

I haven’t talked about this before but I have chickens. Three of them: Patty (because I got her on St. Patrick’s Day), Betsy (an Americauna chicken named for Betsy Ross), and Frida, an exotic Spanish hen named after the Mexican artist Frida Kahlo (Spanish/Mexico: close enough). They are at home no doubt eating my flowers, destroying my lettuce, and shitting everywhere. I miss them.

Yesterday morning at Ballymaloe I went for a walk in the mist (it’s pretty much always “misting” here), past the pond with the geese and the field where fat pigs stood silently snout-high in thick grass until I spotted what looked like an abandoned trailer on the edge of the forest. My eyes hadn’t deceived me. It was, in fact, an old beat up trailer that had been converted into a chicken coop. And outside, eddying around in waves of brown feathers, were perhaps a hundred chickens!

When I bent down to have a closer look, they all came running over. As if I were their long-lost Uncle Dave come back from America.They chirped and they clucked and they crowded against the fence to have a peek at me and say hello. They were a hoot. I only wish I’d had something to feed them. I might have to steal a basket of scones at breakfast tomorrow.