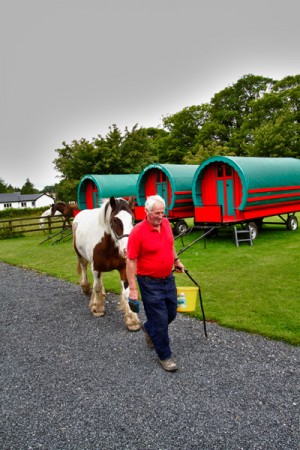 Larry bringing Danny-Boy over to our gypsy caravan. Photo by David Lansing.

Leaning against the fence, Larry the horse wranger says, You’ve got two horses to pick from. That one there, he says, pointing at a bay in the back, is Molly and that one there is Danny. Does it make any difference, I ask Larry. Not to me it don’t but it might to the horse, he says.

Danny looks the more stout of the two. And less hesitant. Molly’s a fine looking gal but something in the way she looks at me suggests she’d rather have the day off, if you know what I mean. Let’s take Danny, I say, and Larry gives a shake of his wooly head the way a horse might and says, He’s got more the look of a traditional gypsy horse anyway, which is probably a load of crap but makes me feel better.

Now then, says Larry, putting a rope on Danny, who’s going to be driving the wagon? Not me, says Mr. Lynch. He points at me. He’s the horseman.

Well, this is only fair. Mr. Lynch has done all the driving in Ireland, even if he has almost killed us off several times, so I might as well take full responsibility for handling Danny-Boy.

You’ve done this before then, have you, says Larry, handing me the bridle. Never, I tell him. Ah then, sure you’ll be grand at it, just grand. When you harness the horse in the morning, says Larry, you start from the head and work back. When you take the tack off at the end of the day, you work in reverse: Start from the back and work your way to the head.

You wouldn’t think there’d be a lot of equipment for harnessing a horse to a caravan (or maybe you would), but there is. Larry keeps going into the tack room and coming out with a new piece of tack, telling me what it is, where it goes, how many notches to give it, how tight to secure it, where to run it. Already I’ve forgotten everything he says. There’s no way I’ll be able to harness him tomorrow morning. Do the winkers go over the bridle or beneath it? Do you put the reins through the collar before you fasten the hames or afterwards? Does the straddle attach to the breeching or not; and how tightly do you buckle the belly strap?

Larry, whistling and nosing, backs Danny in to the shafts and attaches everything to the caravan. Mr. Lynch and I climb up and sit on little pillows on a bench in front. I feel like Cookie on Wagon Train. Larry grabs the reins in front of Danny and leads him out to the two-lane country road, slaps the horse on the ass, and starts laughing as Danny cantors down the country lane at a good clip with me holding tightly to the reins while imploring Danny to slow down. Mr. Lynch yells at me to use the goddamn brake.

I didn’t yell at you when you were driving, I say to Mr. Lynch, so don’t yell at me now, I tell him. Oh gawd, says Mr. Lynch. I don’t know if I can look. He shuts his eyes tight, bouncing up and down on his little cushion. And with that, Danny-Boy and I are off down the tree-shaded lane with the gypsy caravan bumping along behind us.