Dinner in the Hogue vineyard

Years ago, I was invited to have dinner with Wolfgang Puck and his then-wife, Barbara Lazaroff, at their Malibu restaurant, Granita (which, unfortunately, closed several years ago). Barbara, who has a penchant for the dramatic, talked as if she were an actress in a Noel Coward play, always moving about and gesticulating with her hands. She told me how difficult it had been to conceive their first child (she’d take her temperature whenever she thought she might be ovulating and, if the moment was right, call Puck at Spago or wherever he was, demanding he come home immediately so they could have sex; afterwards she’d throw her legs in the air for 15 or 20 minutes hoping things “would take”). Then she told me how exasperating it had been to get Puck on a recent cruise, the main point of which was to have sex non-stop.

And what did Wolfie have to say through all this? Nothing. In fact, over a two hour dinner, I can’t remember Puck saying anything much beyond, “This dish is too salty.”

I’ve shared meals with chefs over the years, from Julia Child to Paul Bocuse, and I have to say that, despite what you see on the Food Network, chefs, in general, don’t have much personality. They’re intense, focused, creative—but not a lot of fun to be around (and please don’t tell me about Rachel Ray or Giada De Laurentiis; they’re not chefs). 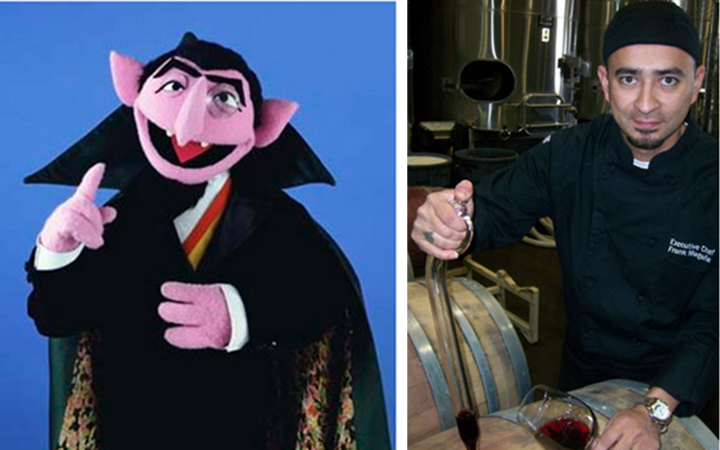 The Count, on the left, and Frank Magaña, on the right. Spooky, huh.

But there are exceptions. And I met one of those exceptions last night: Frank Magaña. Magaña, who looks remarkably like The Count from Sesame Street, is the chef/owner of Picazo 7Seventeen, the only restaurant of note in Prosser, Washington. Last night, for our final dinner on this trip, Hogue Cellars hosted a spectacular meal on the lawn behind the winery that was catered by Magaña and his Picazo staff.

The meal was great, from the duck salad to the rack of lamb with a granny smith apple chutney, but what I really enjoyed was having Magaña around to talk about food, wine, and what it was like to run such a high-end restaurant in a tiny town like Prosser (difficult). 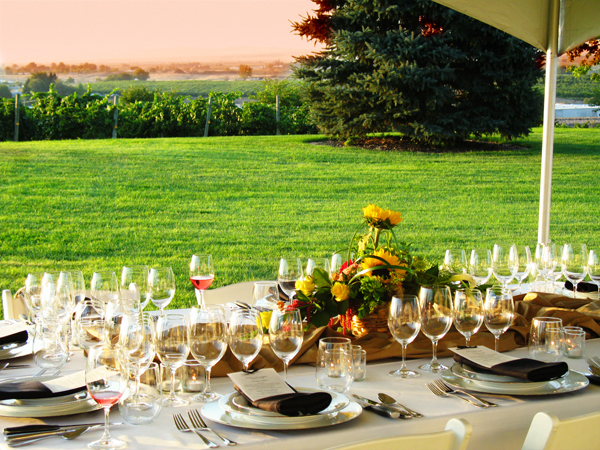 Dinner in the vineyard photo by Alicia Laury.

Towards the end of the evening, Hogue’s winemaker, Co Dinn,  just happened to find a bottle of Opus One inside the winery (hey, winemakers have to drink other people’s wines just so they are familiar with the competition) when Magaña brought out an artisan cheese platter to nosh on. I had so many questions for the chef that eventually Co got him a clean glass and poured him a little wine so he would sit down with us. As I sat there looking out over the darkened vineyard enjoying the wine and the company, it just seemed like one of those perfect summer nights I’ve experienced on many an occasion in France or Italy or Spain. You’re outdoors in a beautiful setting and you’ve just slowly enjoyed a fabulous meal and now you can just sit back in your chair, slightly buzzed, and grin like a perfect fool as you listen to the sometimes silly, sometimes profound conversations going on all around you.