Dinner on the beach 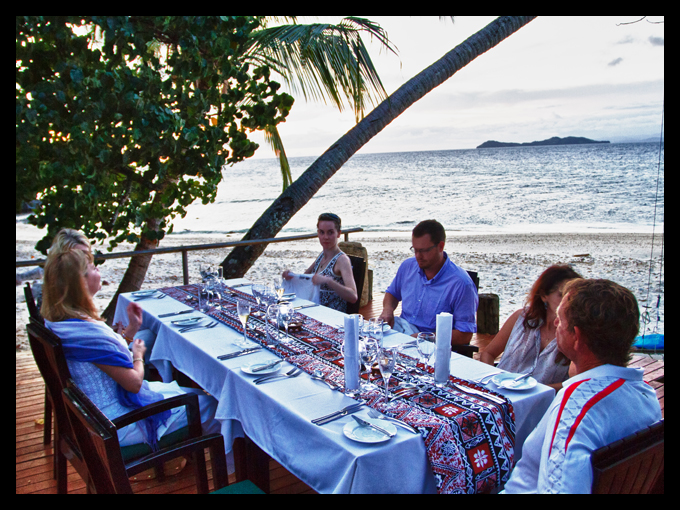 Dinner on the beach at the Royal Davui. Photo by David Lansing.

I haven’t talked about one other person in our group, Elina. She didn’t go river rafting with us the other day because…well, I don’t really know why. I get the feeling Elina likes to do her own thing. So while we were getting drenched from the waterfalls streaming down the cliffs reaching up from the banks of the Navua River, Elina was scuba diving. Which is pretty amazing. Because Elina doesn’t really like all that underwater-with-masks-and-snorkels routine. In fact, she doesn’t really like to be in the ocean, she told me. But here she was scuba diving—for the first time ever—and when I asked her about it at dinner she sounded like a bride who’d just discovered sex.

Anyway, at dinner the other night, Grahame, the owner of the Royal Davui, sat at the head of the table, like dad, with Elina to his right and me to his left. Elina told Grahame that this had maybe been the best day of her life. She just couldn’t get over it. And you know what? I think she meant it. It’s like she’d found religion beneath the surface of the ocean. It was kind of fun to hear her go on and on about it. I think Grahame was as delighted about it as she was.

Grahame is a fascinating character. When he handed me his business card, printed on cheap stock, I noticed that it had a large photo of a tuna on the front of it. “I’m basically a fisherman,” he told me. The money to open the Royal Davui, he said, came from his success as the owner of the largest tuna processor in the South Pacific (most of which ends up in Japan as sashimi). He’s one of those masters-of-the-universe who are both cocky yet humble, demanding but unpretentious, and a marvelous raconteur. In short, a great person to sit next to during a long dinner.

We spent the evening talking about Hobie Cats (he’s a world-class sailor), fishing (he thinks the Chinese are devastating the fish stocks), and women (I’ll have to keep that conversation just between the two of us). Originally he was scheduled to head back to Suva, where he lives, tomorrow morning but he said towards the end of the dinner that he was having so much fun that maybe he’d just stick around for another day or two. Which seemed to make his son, Christopher, a little nervous.

“Are you sure, Dad? Didn’t you say you had a meeting in Suva tomorrow?”

“I can postpone it,” said Grahame, pouring me another glass of wine. Then he leaned in close to me and in a bit of a whisper told me what a marvelous job he thought Christopher had done as the resort’s marketing director. “I’ve been amazed at what he’s done,” he said. “But I don’t think he knows how good he is.”

“Maybe you should tell him instead of me,” I murmured.

Grahame smiled. “That’s not really the way we do it,” he said. And with that, he stood up from the table: Dinner over.