Gary Hogue, who started Hogue Cellars with his brother Mike in 1982, saw me hanging out in the Suncadia lobby and asked if I wanted a ride to the house where he was hosting a dinner party last night. So we walk out of the resort and there’s a canary yellow Lamborghini parked up front and, just kidding, I tell Gary this must be his car.

In addition to the yellow Lamborghini and a massive new winery, Don Watts also owns and flies his own helicopter and owns another winery called Zephyr Ridge. All this from growing spuds for French fries. Something to think about the next time you hear some senator suggesting the American taxpayer subsidize the poor farmers so we can maintain their way of life. 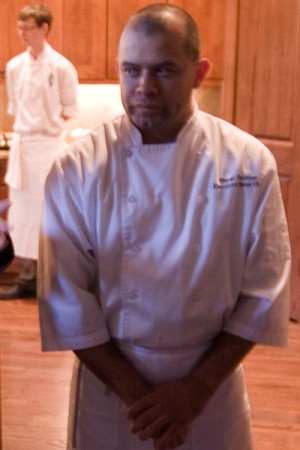 Anyway, we’re driving around the wooded resort, which is built around concentric circles, getting lost as we turn down Snowberry Loop which takes us to Pinegrass Loop which spills onto Larkspur Loop—you get the idea—and all the while Gary, who looks a bit like Telly Savalas back in the day, is telling me stories that are a lot like the drive we’re on (i.e., they circle back on themselves but don’t seem to lead anywhere). Not that this is a bad thing. It’s just the way Gary talks and it’s kind of interesting, particularly when you’re lost in the woods.

“We weren’t dirt poor,” Gary says apropos of nothing as we slowly cruise down Steam Gin Loop, “but we were poor. In fact, I was trying to figure out just the other day when my mom first got a vacuum cleaner.”

And then he starts talking about brooms and sweeping and various vacuum cleaners and I have no idea why and he probably doesn’t either.

Eventually one of the loops actually takes us where we want to go and we end up at a very large log cabin home where a man in a blue suit and red tie is standing in front of an open door and holding a tray with several glasses of champagne. Is there anything better than a glass of champagne after being lost in the woods? I don’t think so.

Inside, dropping lobsters into a large pot, is Oscar. Oscar is from a little town in Jalisco, Mexico. He got a job washing dishes and chopping vegetables at some hole-in-the-wall restaurant many, many years ago, then worked his way up being the prep bitch at various country clubs until he somehow ended up at Microsoft doing everything from BBQ cookouts for employees to high-end dinner parties for Bill and Melinda Gates. And now he’s the executive sous chef at Suncadia.

Anyway, I ask Oscar, as he’s killing the lobsters, what his dream job is and he admits that someday he’d like to move back to some little fishing village near Puerto Vallarta and have his own little restaurant, “Making the best damn Mexican food you’ve never had.”

I tell him I know this stretch of Mexico well and then we have a long conversation about my favorite Mexican dish, mole.

“Listen my friend,” Oscar says, taking a break from murdering the lobsters. “You may think you have had good mole before, but you have never had the mole made by my abuela. It has more than 75 ingredients in it and is the best mole in the world.”

Any man who has worked as hard as Oscar has to become the executive sous chef at one of the finest resort’s in Washington and yet still thinks the best cook in the world is his grandmother…well, that is a fine gentleman in my book. 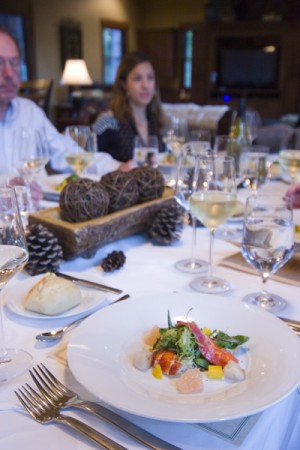 The dinner itself is wonderful. Oscar’s poached lobster and spicy scallop salad is a work of art and the kasu sake sea bass in coconut green curry as fine as anything I’ve ever had.

Still, as we raise a toast to Oscar, I can’t help thinking about his abuela’s mole. I’ll bet it’s every bit as fine as Oscar says.