Drinking in the sights of Havana

Thomas Wolfe wrote those words about Asheville, North Carolina back in the 20s but I always think of that quote when I come into Havana. Particularly the part about seeing the town not in the drab hues of reality but “as one who bursts a window into the faery pageant of the world…”

That’s Havana, a city so poignantly ruinous that her Latin bouleversement gives off an ouzo effect; sweaty romance mixed with faded dreams of patria cloud the heavy air in a city where louche American women once sat in polka dot dresses drinking mojitos while watching a black man place 12 silver dollars along the length of his enormous erect mancrank.

Those were the days. 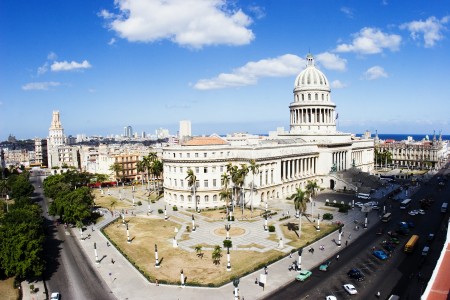 The view from the 6th floor of the Saratoga Hotel, Havana

I never seem to get to Havana before midnight and there’s, literally, nothing to see on the drive in from the airport since there are few streetlights and Havana Vieja has already closed her heavy-lidded eyes. Which is why it was such a joy this morning to peel back the black-out curtains on my 6th floor room in the Saratoga Hotel and take in the strange street pageant below: the rickshaws and cocotaxis elbowing their way into traffic alongside battered Fords and Chevys from the 50s, wood-paneled station wagons stuffed to the gills with hunched men and women, Soviet cars from the 70s, and sidecars from Eastern Europe. 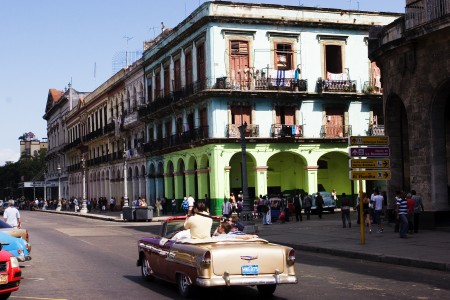 The best way to take in Havana, at least on your first morning, is to walk along the Prado in front of the Capitolio and cut a deal with one of the drivers of the classic old convertibles you’ll find parked in the middle of the street. Do not ask the driver to take you to the malecon or the Revolutionary Museum. Instead, hire the car for two or three hours—even longer—and then cruise the old streets slowly, stopping first at the Partagas cigar factory behind the Capitolio where, if you’re lucky, the director, Abel Exposito Diaz, will invite you into the back room for a smoke and a glass of 12-year-old rum (even if it is only 10 in the morning), and then on to La Bodeguita del Medio where Hemingway downed more than his share of mojitos (and you should down one too) before moving on the the Catedral de San Cristobal, where they say Christopher Columbus’ bones once resided, and then, perhaps, out to Cojimar, the setting for Hemingway’s Old Man and the Sea, for a lunch of camarones al ajillo at La Terraza.

A good start to the day.