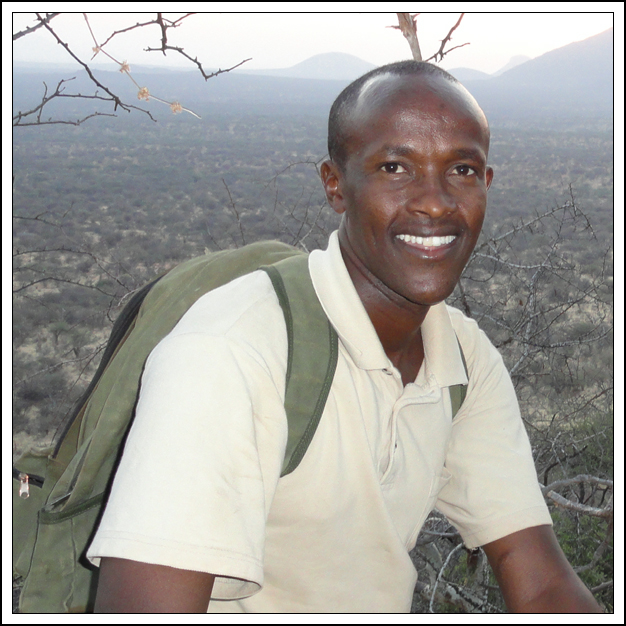 David Daballen. Photo courtesy of Save the Elephants.

I should have mentioned that joining us for lunch yesterday was David Daballen, the chief field researcher for Save the Elephants. I know a bit about David. He’s a Kenyan who grew up near Lake Paradise on Mount Marsabit and last year he and seven other crazy individuals walked from Marsabit across the Kaisut Desert to the Mathews Range following a nomadic bull elephant named Shadrack. Actually, not all of the eight men walked across the Kaisut Desert; some gave up and had to be evacuated. But David Daballen, along with his brother Teteya, completed the trek.

So why did David walk across one hundred and thirty miles of Kenyan desert following an elephant? They wanted to see what it did when it crossed the road. No, that’s not correct. David and the others followed Shadrack because they were trying to learn something about the elephant’s habits. They wanted to learn how he knew where to go. And how he survived what David calls “streaking”—covering immense distances from one safe spot, like Marsabit National Reserve, to another sanctuary, like Samburu. As Iain told me, “Streaking is when an elephant runs like hell, usually in the middle of the night, over open land because he knows he’s not safe.”

David knew that Shadrack was a streaker because two years ago, they’d put a GPS collar around his neck and monitored the big bull elephant leaving Mount Marsabit in May and heading south, across the Kaisut Desert, traversing the same inhospitable stretch of lava fields, dry riverbeds, and thick bush we’d just covered from Lake Paradise before eventually reaching the elephant-friendly Ngeng, a river valley in the Mathews Range. He’d covered 129 miles in five days.

What David Daballen and the other researchers at STE wanted to know was: How did he navigate his way to the Mathews Range? Was he following some unknown and ancient elephant pathway? How close had he come to people? And they figured the best way to get those answers was to walk behind Shadrack. For as long as it took.

The only problem is that when elephants streak, they generally tend to sleep very little. In order to keep up with Shadrack, David and his team needed to cover over 25 miles of desert a day—for five days. Which, they discovered, just isn’t possible. “We could keep up with him during the day,” he told me, “but he’d walk all night long too. That’s where he lost us.”

Anyway, I mention all this because David was sitting down at the far end of the table during the somewhat heated discussion between me and Iain and a couple of times I looked down at his end of the table and tried to get him involved in the conversation, curious to know what a Kenyan who grew up near Lake Paradise thought about some of these issues on animal conservation, but each time I did, I’d see him look nervously at his mentor and then defer to him. I think he was afraid to speak up in front of Iain. Which was a shame. I really would have liked to hear what he thought about all this.