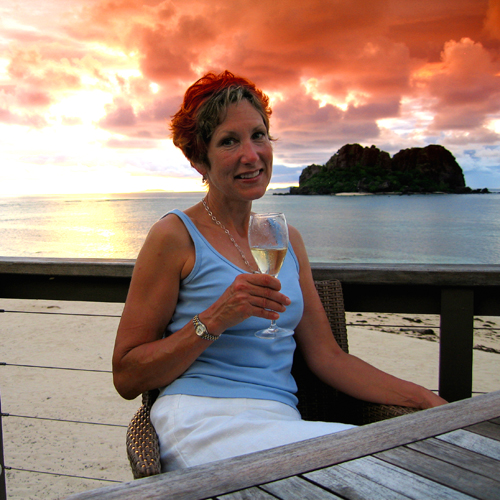 A pretty woman, champagne, and sunset at The Rock on Vomo Island--the perfect way to end the year. Photo by David Lansing.

It’s not easy to get to Vomo Island, situated as it is midway between the Lautoka and Wayaswea islands of Fiji. Most people come to the island via seaplane from Nadi, although you can also take a helicopter. Once there, you’ve got only one choice as far as where to stay on this 91-hectare volcanic island: a chic 28-villas eponymously-named resort spread out along the whitest beach you’ll ever see.

But on New Years’ Eve, the place to be is The Rocks at Vomo, perhaps the most exclusive bar in the world. Situated atop a point on the western end of the island, the only way to get there is to take a short hike through a copra grove. Tonight—just like all nights—The Rocks will only be open for about an hour—just at sunset. But, oh my, what a sunset. Arrive around 6, order champagne or a Blue Lagoon cocktail—vodka, blue curacao, fresh lime juice, and a touch of Sprite—from Niko or one of the other bartenders and watch that big orange ball in the sky drop into the South Pacific announcing the close of 2009. Sunset comes around 6:30 this time of year—and it’s traditional to kiss (or sniff) when the last ray of light is extinguished.