Over the years, I’ve spent many a holiday away from hearth and fire and always found a good bottle of the local tipple to be a great way to feel at home and amongst friends even in a foreign country. In fact, a drink or two with a stranger abroad has, on more than one occasion, led to a lifelong friendship. Like the glass of Drambuie offered by Liz and Malcolm Duff a few strokes before midnight on Hogmonay—the Scottish New Year’s Eve—in Edinburgh as we stood together in Princes Street Gardens in a snowstorm, listening to a Scottish band, Runrig, sing a powerful version of Auld Lang Syne. Just the faintest whiff of a Rusty Nail, a decade later, makes me smile thinking of how Liz and Mal impetuously invited me for dinner to their 500-year-old stone house in Culross, an old fishing village outside Edinburgh, the next day, New Years, where the three of us tucked into a roasted goose and finished off the Drambuie (chilled with broken chunks of icicles pulled off the eaves of the Duff home) while Mal waxed poetic about how Bonnie Prince Charlie gave a bottle of the luscious spirit (along with the recipe) to the MacKinnon clan for saving his life way back in 1745.

“We’ve been a-drinkin’ it in celebration ever since,” Mal told me. Actually, the Scots, and a lot of others, drink all sorts of whiskies and whisky-based liqueurs, like Drambuie, during the holidays. In fact, nearly two-thirds of Scotch whisky is sold during this festive season.

But other countries have their own traditions as my wife and I discovered as newlyweds on a year-long sojourn through Europe. Fresh out of grad school, we bought a dun-colored VW camper, picked it up at the factory in Westphalia, Germany, and then hit the road, giddy and insouciant, masters of the universe. Until December rolled around and we found ourselves listlessly driving through Bavaria which, in winter, can be an enchanting snow-covered fairy-tale if you’re cozy in some ancient half-timbered Deutsches Haus in a medieval village like Dinkelsbühl (not in our budget) or a bleak, dark Burton-esque nightmare-before-Christmas if you’re the sole campers in the deserted Campingplatz Romantische which, despite its name, we found to be as barren of charm as a trucker’s motel just off the Interstate. 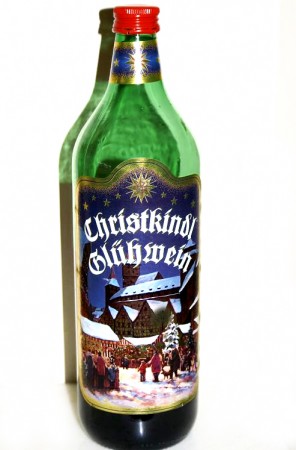 But my good-natured wife refused to let cold-water showers and a bitter German winter dampen her holiday spirit. On Christmas Eve, she baked a rolled turkey loaf, procured at an American military base PX, in a butane oven while I stripped a pine branch from a tree and stuffed it in a wine bottle for our Christmas tree. We sang Christmas carols to each other and downed countless glasses of Sekt, the German sparkling wine, and valiantly fought off the holiday blues that slowly, inevitably covered us like the snow blanketing the gloomy campground. Still, we were doing okay until my young wife tasted a pudding she was making for the first time—her mother’s recipe—and discovered she’d ruined it by inadvertently using salt instead of sugar. That’s when the tears started.

“Oh, this is the worst Christmas ever!” she cried. And I didn’t know how to console her. It was the holidays. She wanted to be home. With her family. Dining on fresh-cracked Oregon Dungeness crab and champagne, a Christmas Eve family tradition, and helping her mother make almond rocca and spritzes. Instead, she was stuck with me, in a cramped, damp, freezing Volkswagen camper, in a spooky German forest. And just as we were both feeling as sorry for ourselves as we possibly could, there was a heavy rap on our camper window. Shocked (we hadn’t seen anyone else here since we’d arrived three days ago), we pulled back the door to find a small, bearded man wearing a green Tyrolian jacket and hat. “It’s an elf!” my wife blurted out. She was, I think, a little snookered. Fortunately, the man—the campground manager—didn’t speak English and ignored my wife’s comment. He was carrying two dark green bottles in one hand and a covered plate in the other.

“Glüehwein!” he said, motioning that we were to take the offerings. “Und Lebkuchen. Von Nuremberg.” And then, in English: “Merry to you Christmas.” My wife pulled back the red paper tissue from the plate and said, “Oh, it’s gingerbread! He brought us gingerbread.”

“And some sort of Christmas wine,” I said, holding up the bottles. “From Nuremberg.”

And then she really started to cry. But in happiness this time. Someone—a stranger!—had brought us Christmas presents. The little elf-man looked at me, shocked, wondering, no doubt, what it was he’d said to upset my wife, but I shook my head to reassure him and insisted that he come inside our little camper, which he did—hesitantly. He showed us how to slowly heat the Glüehwein, a mulled red wine that smelled wonderfully of vanilla and cinnamon and orange, and then we sat there, cold but happy, sharing a Christmas toast with this funny little stranger who had appeared out of nowhere. Many years later, it’s still one of my favorite Christmas memories.