Finding Honor at the Cliff House Hotel in Ardmore

We’ve moved on from Cork to Ardmore, a little seaside town about 60 klicks to the southeast. We’re staying at the Cliff House Hotel, so named because…well, because it’s literally perched on the cliff here.

The original hotel, called Kelly’s, after the owner, a Mr. Kelly from Connemara, was built in the 30s. Mr. Kelly ran the hotel until his death in 1983. After that, they tell me, the hotel fell into disrepair. Until the O’Callaghan family, who’d been coming to Ardmore on holidays forever, purchased the rather decrepit ol’ gal in 2005. They pretty much gutted the place and then spent three years rebuilding, re-opening five years ago this month.

When we checked in we were met by a lovely woman with sad eyes but a lovely smile who introduced herself as Honor. I just couldn’t resist: “I’m Justice,” I told her. She looked at the reservation and seemed a bit confused until I informed her of my poor joke. “Yes, I see,” she said, her pale blue eyes lighting up, “Honor and Justice. Just so.”

Honor escorted us down several floors (the lobby is actually on the ground floor and the rooms are terraced on the cliff below) to our room which was resplendent in pink—pink bedspread, pink armchairs, pink curtains. Above the pink couch was a bookcase with a book I’d heard about but never actually seen: Let’s Go Disco. It’s not what you think. It’s a very stylish cookbook. By Martijn Kajuites, the hotel’s Michelin star chef. Evidently “Let’s go disco!” is what Martijn shouts at his kitchen brigade when things get a little tense in the kitchen. We’re eating there tonight. With Honor, of course. I can hardly wait. 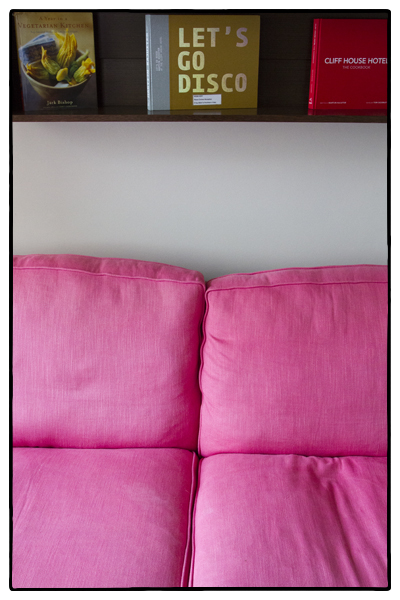 Let’s Go Disco above the pink couch in our room at the Cliff House Hotel in Ardmore. Photo by David Lansing.