Flamingoes and stingrays and jutías—oh my!

Woke up this morning to stiff northwest winds and brooding cloud cover. Not good weather for fishing. We skimmed the bruised chop in the Halcón’s Dolphin skiff, Hardy and me silently watching the agitated seabirds in the mangroves and palm trees as we approached the flats.

Herons, balancing on one leg, stared at us; cormorants, perched on low branches, dried their wings in the breeze; frigates floated high above us, riding the thermals. There’s wasn’t another boat of any kind anywhere. No sign, on any of the hundreds of wild islets around us, of human existence. There was, however, wildlife everywhere we looked: turtles, iguanas, stingrays, plus a Noah’s ark of birds—ospreys, spoonbills, terns, pelicans, even a rare flock of pink flamingoes that rose up quite suddenly over the red mangroves as we passed. 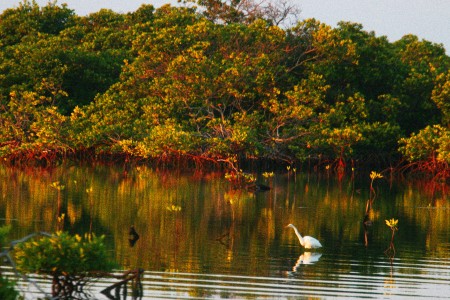 What are we going for, I asked him, “Macabi? Sabalo?”

“Ambos,” he said—bonefish and tarpon both.

I grabbed my #8 rod for bone; Hardy took the #10. The soft, muddy bottom sucked at our wading shoes, making it difficult to walk, but I was glad to have them. Sting rays—a family of three or four—rose up and muddied the water in front of me just before I was about to step on one; I hadn’t seen them. A recalcitrant cat shark, four-feet-long, ignored our approach, lazing in the warm water. Only a jab from the end of Hardy’s rod got him on his way and out of our path.

These flats seem to be a nursery for all kids of marine life. There were baby stingrays everywhere and conch shells so thick that you must pay attention to every step or you’ll end up with one of the sharp spikes going through your rubber bottoms. There were also baby jellyfish floating an inch or two off the bottom, thousands of them, the size of eggs. Our movements stirred them up; they floated to the surface, like hot air balloons rising into the sky, and swirled in the cloud of dark water marking our path through the shallows.

At one point, Hardy cast at several baby tarpon in front of an islet of red mangroves when I noticed some movement in the branches. A jutía was perched on the roots just above the water, cautiously watching us. These dog-sized mammals, endemic and rare, look like a cross between a giant rat and an obese squirrel. We’ve never seen them before but this year they are everywhere. Perhaps because of last year’s hurricanes which really upended the ecosystem in Cuba. 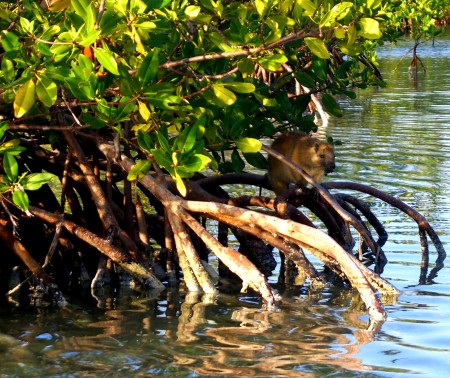 Photo of jutia in mangroves by Greg Geiser

Before the Revolution, there were so many different species of jutía on the island that some people kept them as pets. Then, when things got tough, they started eating them, roasting the flesh with green peppers, onions, and garlic. Now sightings of jutía on the mainland are as rare as appearances by Fidel. If the species is to survive, it will only be because of sanctuaries like the Jardines.

As I slowly waded through the flats, the jutía watched me the way a nervous dog might keep an eye on an approaching toddler. Eventually he scrambled over the mangrove roots and disappeared into the thick foliage, displacing an egret roosting in the branches.

Fishing in the Jardines isn’t just about fishing; sometimes it about everything but the fishing.