From Nairobi to Tanzania 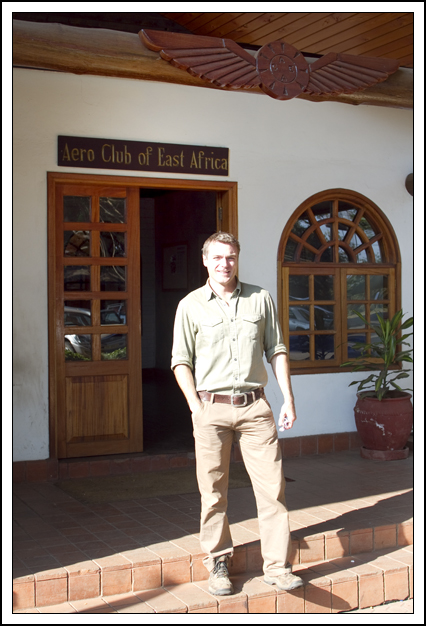 Chris Mahoney, waiting for us at the Aero Club of East Africa. Photo by David Lansing.

So this is how it starts: Inching our way slowly through pre-dawn traffic in Nairobi, the radio station in the car broadcasting a Kenyan version of an early-drive show with two DJs pimping a free Safaricom cell phone to the caller with the best story about why it is sometimes necessary to cheat on your wife or girlfriend, as a way to gain their respect, as our Kikuyu driver quietly, efficiently, stealthily ignores all road rules, as do all Kenya drivers, elbowing his way through a roundabout, inventing a new lane on the dirt path where women, piled high with plastic containers, walk unconcerned.

Ahead of us, an overloaded matatu, the ubiquitous 14-seater Nissan minivans that are to Nairobi what the Tube is to London, stops in the middle of a two-lane road to drop off a woman carrying a cage with several chickens in it. Four young men want in the matatu but there is no room so they hang on to bumpers and running boards, looking back dispassionately at our black Audi as we pass.

Matatu is Swahili for “three people” but I have no idea how these rolling deathboxes got that name since there is never fewer than a dozen people, their sweaty bodies jammed shoulder to shoulder, knee to butt, in them. The current Transport Minister of Kenya, Amos Kimunya, announced last month that he is fazing matatus out. “You should be ready for this so that when the time comes you do not say your livelihood has been taken away,” he warned the matatu industry, but no one believes him. What, after all, would replace them?

Nairobi has the worst traffic congestion in the world. Hands down.

It takes us almost 90 minutes to travel from our hotel, just blocks from the U.S. Embassy, to the Wilson Airport which is exactly 14.5 km, or less than 9 miles, away. If we had jogged there, doing an easy 10 mph, we would have beaten the car. And not had to listen to early morning callers explain why cheating on their girlfriends was a good thing. As we pull up to the famed Aero Club of East Africa, where we are meeting our pilot, our driver tells us we are very, very lucky that we got here before 7 a.m.

“After that, no good,” he says, taking our luggage out of the trunk. “Hapana m’uzuri.”

Standing in front of the Aero Club, hand in pocket, wearing untied hiking boots coated with the red dust of the Mara, is Chris Mahoney who, for the better part of two months, has received my almost-daily e-mails requesting updates, changes of schedule, additions and deletions to itinerary, and odd questions like What’s the best malaria prophylactic with unflagging cheerfulness and good humor (Sample: When I’d requested, for the ninth or tenth time that he change the itinerary once again, after he’d just spent two weeks arranging for some very tricky stops involving multiple small planes and maybe a helicopter, he immediately e-mailed me back with, “No worries. We’re as flexible as Russian circus gymnasts.”)

So here we are. At the Aero Club of East Africa, on the edge of the Athi Plains, the very place where Beryl Markham, whose photo is in the lobby, smiling beside the debonair figure of Douglas Fairbanks, who she taught how to fly, touched down over and over in preparation for her little jaunt across the Atlantic in her Vega Gull, The Messenger, celebrated in her memoir West With the Night. Now as soon as our aides-de-camp show up, we’ll be off to Cottars 1920s Safari Camp in the Olentoroto Hills bordering Tanzania, a 175 mile flight to the southwest that should take us less time than our ten mile drive to the airport.