Get your chicken at Henne 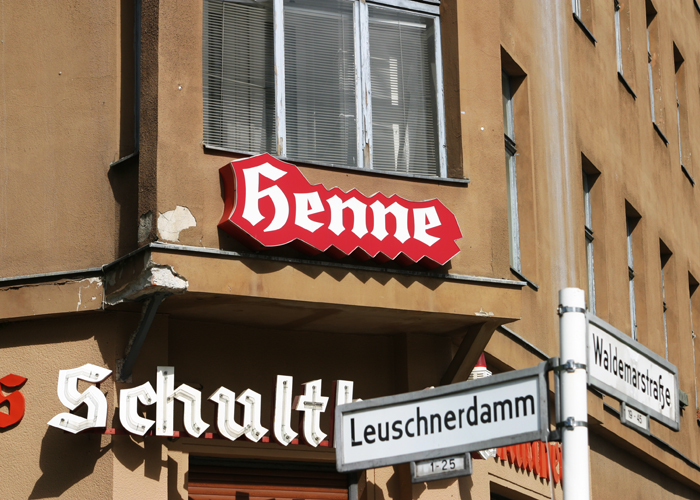 Although my pal at the Hotel Adlon, Herr Lubo, has made reservations for me this evening at one of Berlin’s hottest new restaurants, I’m feeling less than enthused over the idea of a drawn out multi-course meal. So I call and cancel. Instead, I catch a taxi and head for one of my favorite secret haunts, Henne, in a decidedly lackluster neighborhood in what used to be one of the economic “dead zones” of East Berlin.

Decorated, if you can call it that, with deer antlers on the walls and an ancient collection of dusty German beer bottles, the bar and adjoining dining room are small and smoky. It reminds me of a blue collar bar in Pittsburgh or Detroit.

Despite this, the place was jammed. I was informed by the hostess (who was also the bartender and, later my waitress) that the wait would be at least an hour. So I sat at the bar drinking a flavorful country beer, Fränkisches Landbier, served in a heavy ceramic stein, admiring a framed photo behind the bar of JFK along with a letter from the State Department dated May 1, 1963, thanking the restaurant for inviting the president to the restaurant for a meal (which, evidently, he declined).

The chicken, however, is incredible. In fact, I think it’s safe to say that it’s the finest chicken I’ve ever had. Crisp, moist, flavorful. It was so good that when the hostess/bartender/waitress refused to tell me how it was prepared, I devised a ruse to sneak into the kitchen and see for myself. But my plot was foiled by the lone cook, Andreas, who, though happy with the beer I brought to him as tribute to his poultry cooking, refused to let me see around his wide back and into the cramped kitchen where he performs his wonders.

When I returned to my table, my waitress/bartender also scolded me—then brought me a shot of a mystery eau de vie, promising that if I could identify the liqueur’s fruit, she’d reveal Henne’s secret chicken recipe. I guessed cherry but, alas, it was strawberry. No secret Henne chicken recipe for me.