The Scots are mad for their walk-abouts. If they spot a stretch of open country or, even better, a hilly moor, they’re off and about before you can say Give me my walking stick. Last night, while I was sitting in a rusty old chair in the garden of the Glenartney Inn, Charles was swapping stories with the owner, Robbie Mallinson. But the light was fading and Robbie needed to take his dog, Zak, out for a walk. Which, of course, suited Charles just fine. So off they went. 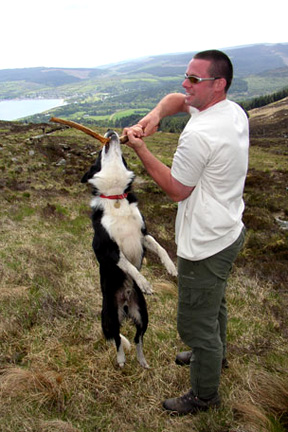 Zack the dog getting the hang of things on a walk with Robbie.

I mention this because it seems that during their walk Charles divulged the futility of our search for a hairy coo. Not a problem, said Robbie. There are hairy coos at the Isle of Arran distillery. They use them to keep the grass clipped.

Perfect. So this morning, after tucking into a substantial FSB prepared by Robbie’s wife, Angela, we were off to the distillery. As Robbie suggested, there were in fact livestock roaming the grounds munching at the grass. But they just happened to be sheep, not hairy coos. Seems everyone in Scotland has a problem differentiating livestock. 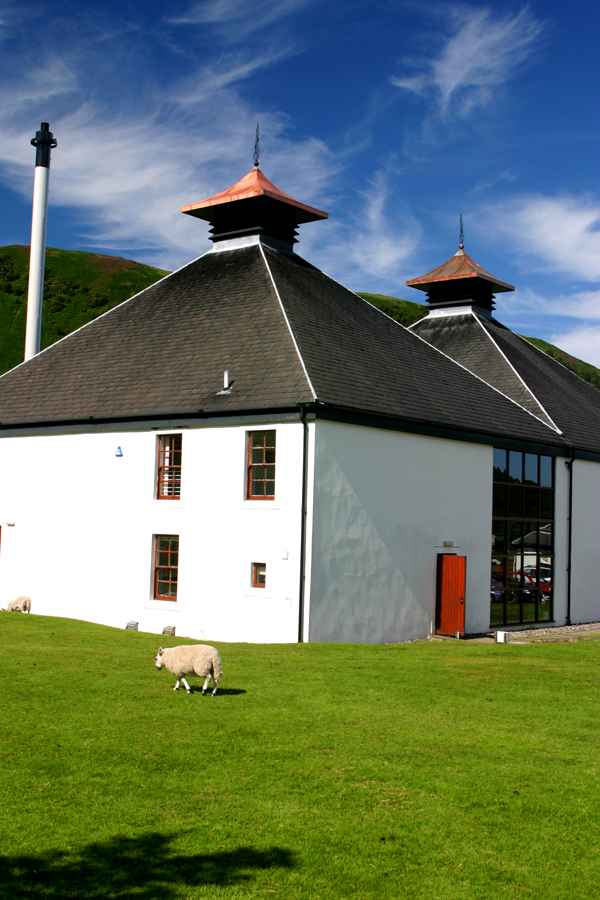 Anyway, since we were here, we thought we might as well peak in at the visitor center where we ran into the manager, Gordon Mitchell, a wee chap who rocks back and forth on the balls of his feet when he talks, lifting up on his toes to emphasize this point or that. He was anxious to give us a tour.

Having gone on a half-dozen tours already, I tell him we can dispense with one more, but he’ll have none of it. He wants to show us everything: his office, the stills, the gift shop, but most importantly, the locked cellars where hundreds of oak casks hold thousands of gallons of whisky.

With the excitement of a child stumbling towards the yuletide tree on Christmas morning, Gordon takes us to a corner of the cask warehouse, standing proudly before three barrels above his head. The first two are single malts from 1997 that are owned by Prince Harry and his brother, Prince William, their names stenciled in white. Next to those is a third cask owned by the actor Ewan McGregor.

The casks are like newborn triplets and Gordon the proud father. And, in fact, this is a whisky nursery of sorts. All around us are other people’s whisky barrels, their signatures and dates scribbled on them like autographs in a baseball program. Each barrel, which holds about 100 bottles of whisky, is owned by an individual. Or a couple. Or a group of friends. It’s the distillery’s unique way of raising funds to finance the enterprise which started up 14 years ago. Own your own barrel of whisky. It costs 1,200 quid for your own cask—about $2,000. And you have to wait three years for it to age (although you can leave it at the distillery to age for as long as 10 years if you like). But at the end, you get 100 bottles, with your own label on it.

When we leave the distillery, I notice that Charles is unusually quiet. He admits he’s a bit down on himself for not having produced a hairy coo for me, especially since we leave the island tomorrow. Thinking a walk-about might cheer him up, I suggest we stop at Lochranza Castle and go for a hike around the bay. Charles doesn’t seem too enthused but stops anyway.

It’s not much of a castle, Lochranza. Just a big pile of stones, really. Originally a fortified two-story towerhouse, with lodging upstairs and a barn on the ground level, it was probably built early in the 13th century. When new owners took over a couple of centuries later, they did what all new owners do: remodeled. Which is when it became a castle of sorts. 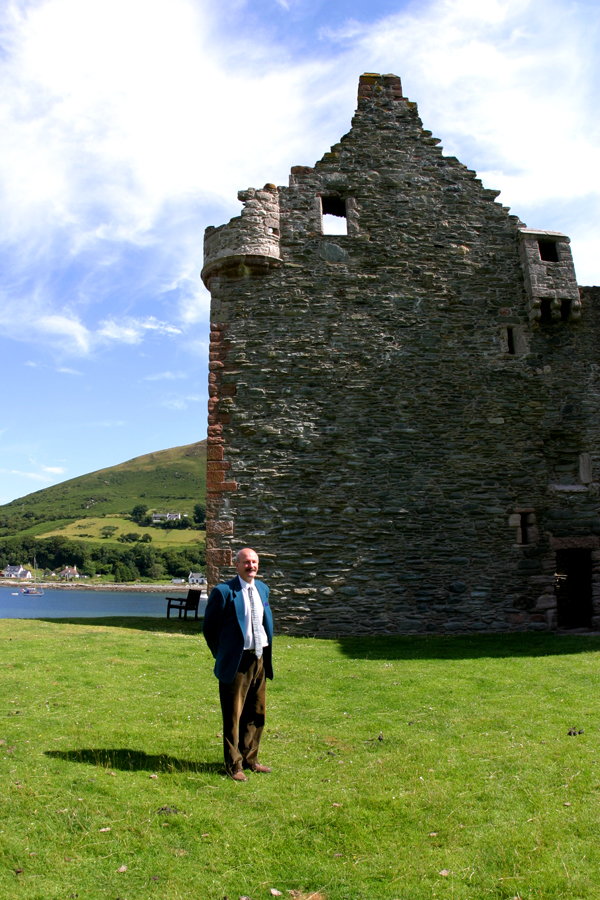 Anyway, while I’m sitting outside the castle soaking up some rare sun, Charles is poking around the structure, seeing what he can see. When he finally comes over to me, he’s much more chipper.

“It just came to me, while poking about these ruins, where we’ll find our hairy coos,” he says. “If you’re up for it.”

How can I not be? Even if I no longer believe they really exist.