So Elmer pulls the car to a stop in the middle of a vast vineyard on the Wahluke Slope (about the only way I can describe the geography here is to say that we’re not far from the Hanford Site where plutonium was manufactured for the Manhattan Project in 1943 partially because the area was absolutely in the middle of nowhere) and Hogue’s masterful winemaker, Co Dinn spills from the car and starts skipping up the dusty aisle between rows of merlot grapes and I just have to start laughing. I can’t help it. You look at Co in his silly floppy hat and rusty pants and think, Oh my god! He’s Scarecrow! From The Wizard of Oz.

I could wile away the hours

And my head I’d be scratchin’

While my thoughts were busy hatchin’

If I only had a brain

And that is so Co! Conferrin’ with flowers and consultin’ with the rain. We’ve spent hours and hours in the car driving from one end of Central Washington to the other and I don’t think Co has shut up for two minutes. He’s fascinated by every rock we see, every ridge we climb, every plant in the field. But unlike Scarecrow, this guy definitely has a brain. In fact, he may be the most brainiac winemaker I’ve ever met. 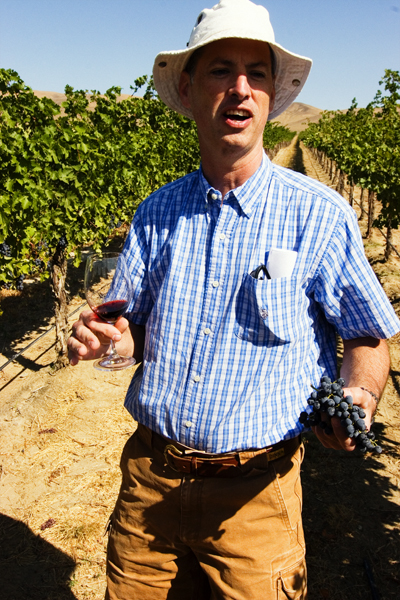 He comes from Tulsa of all places where he was once in the oil and gas business. Somehow he got into wine and took a few winemaking classes and next thing you know, he’s working as a winemaker at Trefethen Vineyards in Napa. And then, 13 years ago, he ended up in Sunnyside, where you can get the best damn peach in the world but little else, as head winemaker for Hogue Cellars.

Listen, I have spent time with dozens of winemakers over the years and I’ve never met anyone as enthusiastic about what he does for a living as Co. He seems to sample all of life the way he does a barrel tasting of syrah, sticking his prominent beak into it as far as it will go and then swirling its essence in his mouth before gleefully proclaiming, “God, that’s good!”

It may be 97 degrees out and we may be in the middle of a dusty field but when Co says, “Let’s go up to the top of this hill so we can have a look at the valley!” by golly, we all follow his jingle-jangle body up the yellow dirt road. Obviously for Co, life is nothing but a ding-a-derry. And wouldn’t we all like to be a little bit more like that?