In search of a Trabi 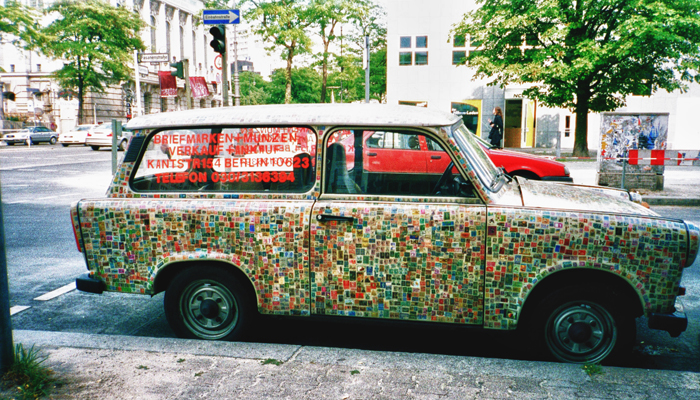 I wanted to drive this old East German Trabi, parked in front of the Paris Bar, but it didn't have an engine. Photo by David Lansing.

When I tell my taxi driver that I want to find a car rental where I can drive a Trabi, he laughs. “No, no, no,” he says, wagging an index finger in the air. “Too dangerous.”

“It is not possible,” he says, and despite my attempts to resuscitate the conversation, our little chat is over. Suddenly this taxi driver, who minutes before had told me in perfect English that I was staing at the best hotel in Berlin, in his “humble opinion,” can speak no English. Mention of the Trabi, a symbol of the old GDR days, has disturbed him.

Trabants—or Trabis, as they are affectionately called—are odd, boxy East German cars made out of plastic and wool with two-cylinder engines better suited to a lawnmower than an automobile. Originally intended to be a closed motorbike, Das Kleine Wunder (the small wonder), first built in the early ‘50s, somehow managed to stay in production until 1991 when the German government, more concerned with pollution than safety, closed the remaining automobile plants and began a concerted effort to get all Trabis off the street.

Once considered embarrassing symbols of socialism—ugly but practical, inefficient but still somehow managing to work—they are sought after by students and those with a lingering case of ostalgie. When I first came to Berlin shortly after the fall of the Wall, they were everywhere; now they are as rare as good Russian cigarettes.

Which is, perhaps, why I badly wanted to drive one. I got a phone number for a Trabi car club in Berlin but could never get anyone to call me back. A Trabi parked on the street across from the Paris Bar had a phone number painted on its window advertising a rare stamp and coin shop, but when I spoke with the owner I was told the Trabi had no engine and was simply used as a parked billboard.

“Sooner or later, I think they will take it away,” he said.

Still, I’m determined to find a Trabi I can actually drive.