“In the tropics, they may bump and bite divers”

The title of this blog is a little throwaway line from the Florida Museum of Natural History regarding silky sharks, so named, according to the museum, “because of its smooth hide.”

Well, yes, the hide is kind of smooth if you stroke it one way but then again, if you go against the grain it’s like sandpaper. Which I learned when Elvis grabbed a six-foot-long silky shark in about 30 feet of water and brought him up to the surface just so, you know, I could have a look at him. Since I wasn’t diving like the rest of the boys, my job was to cut up a large red snapper that Elvis was going to feed to this school of circling sharks. Presumably after everyone got out of the water. 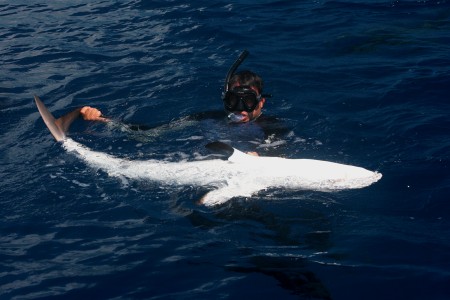 Elvis brings up a silky shark. Photos by David Lansing.

“Silky sharks are not generally dangerous to divers, but in the presence of speared fish or if approached directly, they can become aggressive, and therefore should be considered a potentially dangerous shark.”

As I rubbed my hand along the belly of the shark which floated upside down on top of the water as Elvis held its tail and head—sort of like you’d support a toddler just learning to swim—I asked him if these things were dangerous.

I love that. Usually, no. But maybe sometimes, yes?

I was tempted at that moment to toss in just a little taste of the snapper I’d cut up with Elvis’ dive knife—maybe the head—just to see if, in fact, it might become less docile “in the presence of speared fish.” 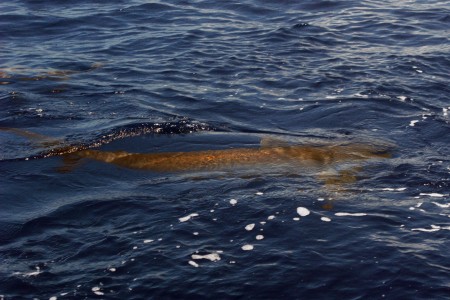 A silky shark waiting for me to give him a snack.

Which is when Pedro popped to the surface, also holding a five- or six-foot long silky shark by the tail. Greg was right beside him. “He tapped me on my back and I turned around and he was holding this shark in his hand,” Greg said. “Scared the crap out of me.”

“This species is considered potentially dangerous to people primarily because of its size. It’s oceanic habits make contact with humans a relative rarity,however, it has been implicated in a few attacks.”

So Pedro has his shark up on the surface and is petting its stomach and Elvis has an even bigger monster next to the boat so I can reach over and feel it and in the crystal clear waters of the Jardines I can see Hardy and Fletcher at a depth of maybe 20 feet with four or five other silky sharks circling around them. 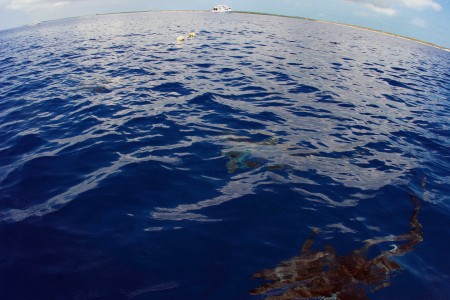 In the foreground, two silky sharks just beneath the surface.

Eventually the boys get tired of playing with sharks and hop back in the dive boat. While they’re taking off their masks and regulators, Elvis casually grabs a big chunk of raw fish and tosses it in the water a few feet from the boat. Something that looks like Jaws comes out of the water like a torpedo and ravishes the fish, swinging it back and forth in its mouth like a dog with a large steak.

“Did you see that?” Pedro says, laughing.

We all saw it.

Then Elvis takes an even larger chunk of the red snapper, ties it to the end of a long wooden pole, like a broom stick, and holds it about six inches above the water. The water explodes. Not with just one shark but three or four. They almost rip the pole out of Elvis’ arms.

“Are those the same sharks we were just diving with?” Hardy asks.

He takes the remaining scraps and tosses them out on the water. The surface is thrashed and looks like someone just dropped a couple of M-80s into the water.

The boys are silent.

Elvis says, “Are we done diving for the day?”

Uhmmm, yeah. I think so.