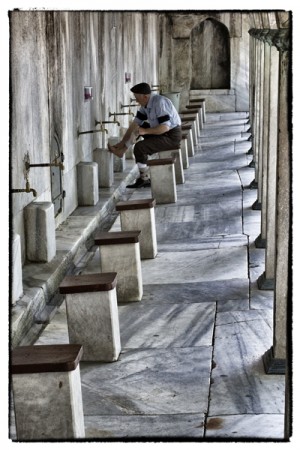 It is still early in Istanbul. So early that Sidar and I, with nothing else to do, decide to take a walk around the Blue Mosque, just a few blocks away. There is no one there except a solitary man washing his feet at one of the outside taps on the side of the courtyard. There is something vulnerable and personal about this man washing his feet. To me it feels like watching someone unbutton a shirt and remove it. The light, the solitude, the vulnerability—I want to take a photo of the scene, even though it feels so voyeuristic.

I ask Sidar if I should go up to the man and ask if it’s okay to take his photo.

“No,” says Sidar. “Just take the photo from a distance so you don’t disturb him.”

And this is what I do.

The Blue Mosque isn’t officially open yet, but Sidar leads me to a door marked “Exit Only” and, after slipping off our shoes, we slip past the curtains into the interior of the prayer hall. The only other person inside is an old man pushing an ancient standup vacuum cleaner slowly over the dusty red carpet. The old man either doesn’t notice us or chooses to ignore us, it’s hard to say which.

“This is very rare,” Sidar whispers. “Just wait. We will come back here this afternoon and you will see. There will be thousands of people in here. So many that we will have to wait half an hour or longer just to get inside.”

But for now, the Blue Mosque is all but empty. Just us and the old man with his vacuum.